Match Track:
So with chaos reigning on the railway again and a hot date to keep with Adam Pope from Radio Leeds the Happy Chocker and I plumped for the car to get us to Elland Road in time for the lunchtime kickoff.  On the way we diverted by Pontefract to pick up Jamie outside PGI A&E but not before HC tried to reprise the scene from "Max & Paddy's road to nowhere" when they collided with the cow as he approached the pedestrian crossing outside the hospital. 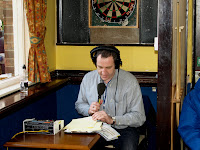 An unsuspecting nurse stupidly thought she was safe to cross and stepped out just as HC came to a screaming halt inches from her uniform.
All's well that ends well though I just hope he can get my fingernail impressions out of his dashboard!
After parking the car we gained access to the back room of the Peacock ready for the interview with Adam Pope.  Now I'm sure Adam's broadcast from all sorts of places in his career but I'm sure he won't mind me saying he looked rather odd regaling West Yorkshire and beyond from beneath the dart board of the Peacock! 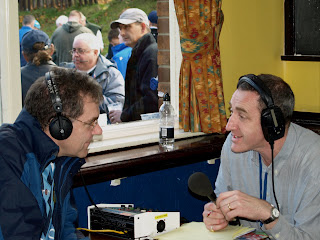 My big moment came at 11.20am and after prattling on for 5 minutes hopefully entertaining the listeners with some of the amusing moments of the season so far I finished quizzing Andy Ritchie on which team he supports, given he's played or managed both Leeds and Udders and also pulled on that red shirt.
I thought he sidestepped the grenade quite well in claiming allegiance to his home town team of Oldham.
After my brief moment in the radio limelight we made our way into the stadium filling fast with a crowd of over 32000.  Surprisingly Huddersfield had failed to sell all their allocation of tickets.............how the stayaways must have rued their decision before the afternoon was out.
The atmosphere in the ground was slightly muted at the start, not sure if that was the impact of the early kick off or a bit of a hangover from Tuesday's exploits. 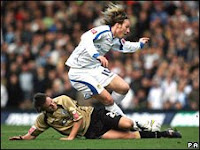 The game started with Huddersfield, wearing the worst example of an away kit since well Oldham's Hi viz vest kit, on the back foot and within 3 minutes the ever improving Snoddy had put the mighty whites in front with a well taken goal.
Now an early goal should have been the signal for Leeds to take control and kill the match but even though we always looked the most likely we managed to have the biggest share of possession but still go into HT with just the 1 goal advantage.  Huddersfield fought and scrapped with a passion and up to a point managed to nulify the threat of Delph.  I think most fans were expecting Leeds to kick on and secure a valuable win but before Leeds got a touch of the ball in the second half Huddersfield were level.  The old frailties in defence floated to the top as Leeds appeared to be still "in the dressing room" allowing Town to pinch a goal, celebrating in front of their disbelieving fans.
Although this acted as a catalyst for Leeds to continue to pour forward no goals came their way despite good efforts not least of which from Beckford (fresh from the bench), Becchio rattled the bar with a trademark header, Robbo, Dougie and Snoddy.  As the game entered 3 minutes injury time Leeds geared up for one last effort, still attempting to pass their way through the resolute Town defence.................but disaster then struck as the ball was lost on the half way line and Danny Cadamartri tested Paul Telfer's ageing legs before crossing for the winning goal............Total utter disbelief descended on the vast majority of the crowd whilst the Town fans celebrated deleriously as if they'd just won the FA Cup.  There was no time to launch a rescue mission at the other end and as the overly fussy and irritating premiership ref blew his whistle for the end of the match.  Unbelievable..........for the 2nd time in a week we have dominated a match and lost 2:1.  The team as a whole played well enough to win with Snoddy again winning the Man of the Match for me.
The post match phone ins were full of frustrated and annoyed Leeds fans together with Town fans who now think Gerry Murphy (Town caretaker boss) is a god.  It just goes to show what a funny old game football is.........on another day Leeds could easily have run out winners by 2 or 3 goals but not for the first time this season we have been left to rue our generousity in front of both our goal and our opponents.
So on Monday we have to pick ourselves up and see off Northampton in the cup in order to progress to the next round.  Sooner or later our passing game will bear fruits and with sharper finishing consign opponents to defeat.......I just hope we don't have to fall too far behind the top two before that happens.
This is Marching on Together gutted, hacked off, frustrated, hungry, tired and ready for bed reporting for Radio Leeds from Elland Road.  Good night.
Leeds 1 v 2 Huddersfield

Posted by Andrew Butterwick at 17:08