As we come to the end of another rollercoaster year in the life of Leeds United I thought it appropriate to reflect on the ups and downs of the last 12 months.  At this time last year we were 3rd in the table, a point off the automatic promotion spots having just spurned the chance to go top for the new year after losing 3:2 at eventual champions Swansea.  Worse was to come though as we capitulated meekly to Oldham on New Years day and continued to inflict fatal wounds to our promotion chances throughout January with football that was sorely lacking passion and direction.  The poison dwarf was in the last throws of his tenure at Elland Road before his defection to the Toon and his subsequent replacement by our own Messiah Gary Mac.  So from a statistical point view we are worse off than this time last year as we sit 13 points from the automatic promotion places and 5 away from the dreaded play off places, but somehow I am more confident of progress this year than last.  If the new boss, Larry, can get the organisation and tactics right we certainly have a squad with enough quality and experience to maintain a successful promotion push especially if he uses the January window to strengthen the centre of defence and goalkeeping positions, sorry Casper.In the best tradition of year end reviews I have put together my thoughts on the highs & lows of the year:
High point:  Play Off Semi Final win at Carlisle.  There's still a dent in the ceiling where I jumped up when Jonny Howson slotted in the last minute goal that took us to Wembley.

Low point: Well there's plenty of choice here...............Wembley, Uddersfield at home, Histon, Northampton away, Colchester home but after great deliberation I think the sinking feeling as the referee blew his whistle at Wembley consigning us to another year in Div 3 takes the award.

Best Goal: Again spoilt for choice here, Bradley Johnson's stunner in the last home game of last season against Gillingham, Beckfords hat trick goal against Chester, Delph's drive against Walsall, Delph's audacious 40 yard return against Stockport, any of Beckford's cup goals against Northampton, Howson's winner at Carlisle but my favourite for the year was Alan Sheehan's curling free kick that snatched victory from Donny Rovers at The Keepmoat. 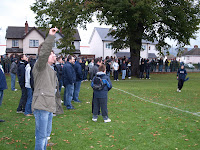 Comedy moment: Tempted to mention the defence here but I'll resist........Lot's of choice here though.  The playful chants between the two stands of Leeds fans at Swindon last season as they waited to be let out "You're only here to watch the Leeds" You're not famous any more" etc etc has been repeated at all away grounds where we're allocated two stands, Northampton fans singing "5:2 it's your keepers fault" after they scored a late consolation goal in the cup but the award goes to the moment Leeds fans invaded the pitch at Cheltenham when a pub side playing in our away Yellow strip scored on the pitch opposite the Cheltenham ground. 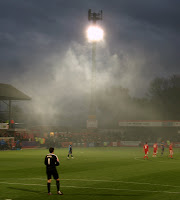 Most bizarre moment:  Smoke drifting across Cheltenham's ground as a loan dissenter in the allotments behind the goal makes an unusual protest about the "noise on match day"

Best signing:  This could turn out to be Malcolm Christie or even Becchio.  Andy Robinson seems to have dropped off lately but Dougie Freedman gets my vote for his vital goals in the latter stages of last season.

Best young player: That's easy..........Fabian Delph, a rare talent who has all the potential to be a superstar of the English game.
Well there you are another year over.  Happy New Year to all my blog readers and best wishes for the future.
Posted by Andrew Butterwick at 11:17