Preview track:
A new year and hopefully a new start for Leeds United.  If we are to continue our embryonic unbeaten run we need to dispatch relegation strugglers Hereford at Edgar Street tomorrow in style, something that most Leeds fans would have thought a formality not so long ago, but as we have found to our cost there is no such thing as an easy game in this league.  No doubt the Bulls will be savouring the chance of pitting their wits against the mighty whites and raising their game a notch in front of their highest crowd of the season...........................but we should be used to that by now and I fully expect the new found vigour and resolve in the Leeds camp to be too much for the team from Cider country.  For years Hereford used to parade a Hereford Bull round the ground before matches but I'm not sure that happens anymore since the Mad Cow alert.....................I just hope that our long trip is rewarded by seeing Leeds slaughter the Bulls on the pitch. (sorry) 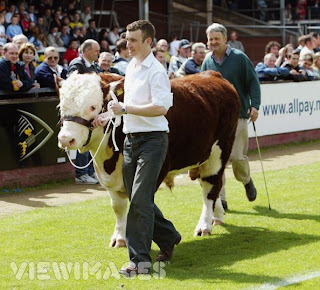 Another festive season has flown by with it's round of celebrations with family, food and no little seasonal alcohol.  I like Xmas, not that I see myself as particularly religious, but it does give a chance to get off the usual treadmill of life and spend some time with family and friends doing things you wouldn't dream of doing for the rest of the year.  So I've played the full range of board games, Wii games and the inevitable round of alcohol fueled Charades (classic impression of Lark Rise to Candleford included).  Ive eaten every combination of meat and savoury product known to man, in doing so "raiding" Nigella's kitchen and the M&S food hall for inspiration, and had enough mince pies and Xmas cake to last until..........well next Xmas!  On New Years Eve the present Mrs MOT and myself  went to a party at one of our neighbours and very good it was until the midnight celebrations got under way.  Once we'd had the party poppers to the chimes of Big Ben and one of the hosts sons had been dispatched out into the freezing night to come back in? don't ask!..............we were then treated to some fireworks, left over from a wet Bonfire night.  Now let me say from the start that I like to think I am old enough to know if the present Mrs MOT says "You really don't want to do that when you've had a drink darling" in THAT voice I usually would err on the side of caution and obey.....................so I watched cringingly as the host chose to ignore his wife's advice and started to light the powerful rockets and Roman candles in front of the excited children present.  What followed was a near disaster as the final Roman Candle refused to push into the frozen ground and started to fall over just as it exploded into life.............................now I was stood near the open patio doors as I saw the ball of flame hurtling towards not only me, but the newly decorated lounge..............................Yours truly then sprung into action slamming the patio door as the first fireball exploded against the glass and then opened the door to drag in the host's terrified son before the 2nd ball of flame incinerated the patio door..............I got the impression that our host was not going to get his New Year's kiss and cuddle when we left judging by the withering look his wife gave him as we made our way home!
Back to Football and with the transfer window opening speculation is rife over who's coming and who's going with Larry indicating he could have someone in place ready for tomorrow's trip.  I just hope he strengthens the defence ready for our final push to promotion and that we don't lose the ever impressive Delph and free scoring and frustrating Beckford.
I end on a rather sombre note as I will be attending Uncle Noel's funeral today and although his death was more a release after a long illness than a shock it will still be a sad time.  He was a season ticket holder for many years so hopefully we can send him on his way with 3 points secured from tomorrow's match.
MOT
Posted by Andrew Butterwick at 08:24