A misty and foggy night greeted The Happy Chocker, brother Chris, the Lucky Chocker and me as we hurried down Elland Road for a pre match drink in The Peacock.  The atmosphere in the famous old pub was already at boiling point when we forced our way to the bar to secure some drinks. As I was waiting for the landlady to look my way I noticed Denby and Jason leading some  alcohol fueled ditty's as they attempted to lose their voices before a ball had been kicked.
Despite the fact that this was a wet Monday night and the game was on Sky there was a decent crowd of just under 20000 inside ER no doubt looking forward to gaining revenge for our 3:1 hammering at The New Den in October.  I felt a tinge of apprehension and definite pre match nerves as memories of our passionless display at The Bescott Stadium just over a week ago drifted into my thoughts.  One thing for sure the crowd was "up for it" and although few Millwall fans had made the trip that didn't stop some "healthy" taunting of our Friends from Sarf Landan.
The game started at a frenetic pace with the Londoners having best of the opening exchanges as they started to out pass the mighty whites.  They certainly weren't afraid to mix some robust tackles with their neat football especially on Robbo who was buzzing about all over the pitch.............all in all it made for an enthralling contest as Leeds dug deep to keep out  the Wall. 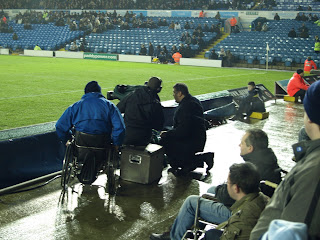 There was confusion in the Kop as the Sky cameraman positioned himself in front of the disabled section blocking their view...........now this was a good test for the infamous stewards who after some persuading from a couple fans made the poor cameraman reposition himself out of harms way.  It wasn't long before they were back harassing everyone to sit down though.  The Happy Chocker had learnt his lesson from the last match though and took a more strategic approach to standing up.............unlike the guy behind who dared to stand up and sing "Stand up and sing for Leeds"not for long though as he was whisked away at HT never to return!
Back to events on the pitch and  Bam Bam and Rui were looking solid at the back and although Casper came and caught a couple of crosses he did nothing for my nerves with some of his more indecisive moments culminating with a ball that, without the advantage of TV in the Kop, appeared to cross his line after hitting the post but the ref waved play on.
Leeds' gritty approach paid dividends though when a swift break instigated by Robbo and continued by Snoddy left Beckford in the clear who planted a superb shot past the despairing Wall keeper to give the whites the lead against the run of play.  HT came and the ER faithful gave the Leeds battlers a good ovation as they made their way off for their cup of tea.
The Lucky Chocker's presence was duly noted as he doesn't come to that many games but when he does Leeds always seem to win.  Even so and despite the fact that we were 1:0 up this particular fan was under no illusions who had been the better team in the first half.....and they weren't playing in white.  But the new resilience that has crept into the team of late was to the fore and hopes were high for the 2nd half.  Danny McGuire and Ronnie Rhino were paraded on the pitch during the interval to preview the forthcoming World Club Challenge. 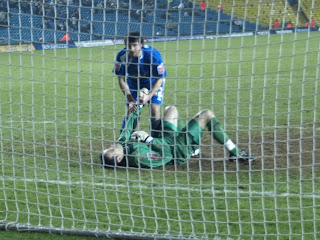 The 2nd half started pretty much as the first half had with Wall finding the better rhythm but Leeds sticking to their guns and working hard to nullify their threat.  The Millwall goalie had amused the fans in the Kop with his rantings before his clash with Beckford so when he went to ground for what later was deemed to be a JB elbow (I didn't see it though......sound a bit like Wenger but it's true!) he brought the wrath of the partisan Kop on himself for the rest of the game.
Larry again made his substitutions pay with Robbo, Trundle and Snoddy departing for Becchio, Johnson and Howson.  This gave Leeds the spark they needed to repel the final efforts of the Londoners to pull back a goal that most neutral observers (not many inside ER though) would have said they deserved............Casper pulled off a good save to keep it at 1:0 and as they pushed on they left themselves exposed at the back and when Becchio finished his cameo appearance with an exquisite header back for Beckford to smash in his 2nd goal of the night it was all over and ER erupted with a mixture of joy and relief. 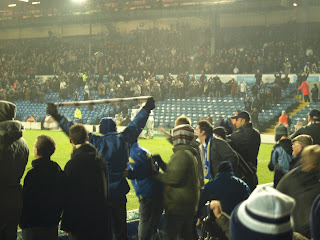 3 points earned the hard way and I couldn't help reflecting that this was a match that we would have lost earlier in the season and maybe Larry has got the streetwise skills needed of a manager to get us out of this league.  Man of the Match again was Bam Bam closely followed by the ever improving Rui.  Beckford had a strange game in that but for the two goals I thought his decision making, touch and general play was poor.............but if he knocks in two goals who cares?  I just think he needs to play on the shoulder of the centre half more rather than dropping back and trying to pick the ball up.............nit picking I know but his touch and ability to pass is poor but his speed and ability to lose defenders when running towards goal is good so why not stick to it?
Uddersfield on Saturday which should be a cracker given their recent form............4000 whites fans will help generate another pressure cooker atmosphere..............another win and we're right in the mix again.  A weeks a long time in Football though!
MOT
Leeds 2 v 0 Millwall

Posted by Andrew Butterwick at 22:31

Hiya MOT. I was looking forward to seeing the game live so that I could see just how they were now playing under Larry. Outpassed, outjumped and second to the ball, one would think Milwall were at home. But they dont have Becks and for all their good play, they did not create too many clear chances and were restricted to shots outside the box.

Still not sure about our defence but Naylor was excellent. Casper and himself stopped a certain goal between them (it did not actually cross the line due to a good stop by Casper and a great clearance by Naylor). Indeed, Casper's handling of slick low crosses was pretty good.

Apart from his goals, Becks was poor (!!!, lol), his layoffs and general distribution were awful. He gave the ball away a lot.

I thought Snoddy and Robbo were excellent in helping out their respective full backs but we badly need a ball winner in midfield. The only balls we won in the air up front were won by Becchio (he is not THAT tall, but sure can jump).

All in all a nervy night but 3 crucial points which I will take anytime. Cant take much more of this, lol. Great match and preview reports as usual, many thanks.

Peter,
"Cant take much more of this" imagine watching every match live, lol
Interesting point you make about the ball winner in midfield. Dougie seemed to be quiet last night but we tend to miss him when he's not there. I think your right as their No 32, Boulder, seemed to be bossing things despite all Delphs efforts as has been the case whenever we've lost this year.
Anyway roll on Saturday and another 3 points. Final thought though....I bet that's not the last time we play the Wall this season....next time will be in North London on May bank holiday????
MOT