So with a free Saturday at my disposal I thought I would adeptly balance some "brownie point" gathering, taking the present Mrs marching on Together to Costco, with watching a bit of Saturday sport on the box something I don't get many opportunities to do. The choice of viewing was good as our national team were not only taking on some colonial nonentity in the Caribbean at Cricket but also facing some Latino upstarts in the Six Nations Rugby. A perfect chance to watch a game without the usual stress and frustration that tends to accompany watching Leeds. 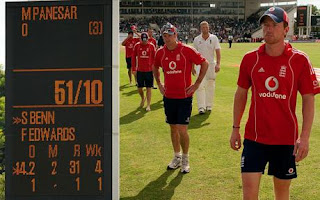 First port of call was Sky 1 and the Cricket........the first indication that all was not well was the little sticker in the top right hand corner showing "today" ie not live.....well maybe it's raining.....then I noted that at 12 for 3 we hadn't got off to the best of starts chasing a West Indies lead of a mere 74! Swapping channels back to BBC and I had already missed England's opening try..........this was better at least here we could put behind us the awful performances in the Autumn and get off to a flyer before next weeks clash with the Welsh. England's cause was greatly helped by the Italian management not picking a recognised scrum half and consequently even when the Italians got the ball it was anyones guess where it might end up.
With the Rugby lads well set for victory I swapped back to the Cricket....23 for 7 ffs , now I know why the "today" sticker was on the screen we must of lost already? (stop sniggering you Aussie readers....we'll recover before the Ashes!) after missing the next two wickets while I boiled the kettle for a drink I just got back to see the final humiliation of England's final wicket at 51 the 3rd lowest total in test history.
Now in shock and in an attempt to seek solace I switched back to the Rugby where by this time we should be cruising past 25 points which we were.........but as I settled down to watch it soon became apparent that England were the slightly better of two poor excuses for international teams on show. The horror show that unfolded before my eyes left me with that sinking feeling especially as we play the mighty Welsh next week. All in all the experience made watching Leeds get beat by Walsall in freezing cold conditions last week seem a picnic in the park!
The reason we didn't have a game yesterday was to accommodate the Sky cameras at ER tomorrow night. The TV guys must be rubbing their hands as not only is the game a crucial promotion clash but it also brings together two clubs that will generate a white hot atmosphere on what promises to be another bitterly cold evening. For me it's a game we can't afford to drop any points if we are to stay in touch with the promotion places. With our visit to the puppy dogs of Uddersfield at noon on Saturday we could be in the lofty position of 4th or 5th if we secure two wins or we could be floundering on the periphery of the action if not.
I thought Millwall were one of the better teams we've played this season ,along with the Posh and Leicester, when we were beaten at the New Den so Larry will need to have everyone firing on all cylinders if we are to send the Lions home with their tails firmly planted between their legs.
The fans from South London who choose to follow Millwall bring with them a notoriety, gained by a hard core minority, that will see an unusually large Police operation for a Monday night game at ER. Their recent exploits at the home of the Codheads has added fuel to the fire and will not have gone unnoticed by Leeds' fans more excitable fringe. Hopefully the match will pass with the more sensible fans on both sides prevailing.
Here's hoping for a win to get Leeds back on track and fire us into the final lap of the promotion race with new vigour.......I just hope that the lack of new blood in the team doesn't back fire.
MOT
Posted by Andrew Butterwick at 09:31