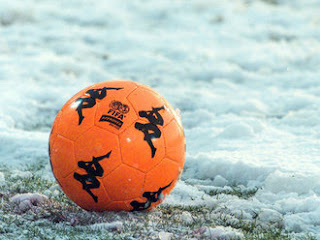 As tomorrows match has been called off due to a few flakes of snow (whatever happened to clearing the pitch with an army of "fans" and playing with an orange ball)..................I thought I would turn my attention to the transfer activity at ER.
As the window slammed shut at 5pm (or did it...Premier League clubs can extend it if they've had problems due to the snow?) the good news, other than a certain Mr Delph staying put, was that Bam Bam Naylor has signed a 2.5 year contract.  The young Yank Grella has also been secured on a permanent contract.....and joining Scott Gardner in going the other way out of the club is Paul Telfer.  No news on Dickinson or Trundle which has got to be worrying and also no news of an incoming Goalie to boost our strength between the sticks.  So I suppose all in all a disappointing anti climax to the controversal transfer window as far as this Leeds fan is concerned...........when I think about it very much like watching Leeds week in week out!
I know Larry has talked a lot about the reopening of the transfer window in a weeks time and I expect some activity then but the lack of permanent signings in the window will do nothing to pacify Capt Birdseye's critic's who believe he is reluctant to invest in the team, prefering to save his cash for the buy back of assets for the club such as Thorp Arch.  I can only imagine the outpouring of anger that will cascade down from the stands if we slip up against Millwall in a weeks time as the majority of fans I have spoken to have been waiting for the transfer window in the expectation that we will strengthen the team particularly at the back.  Whilst the signing of Naylor will be universally welcomed that won't compensate for the lack of permanent replacements for both full backs or for that matter a commanding Goalie.  Patience is wearing thin me thinks and it won't take much for the anti Bates protest movement to spring into more vocal action.
One thing I have found out today is the real reason for the postponed matches..........they spookily correspond with away matches that Jonty buys tickets for..........he booked a weekend in Hereford only for the match to be called off for frost and now he's flown back from Chicago with an Orient ticket in his hand luggage only for the match to fall foul of the weather.....mmmm I'm told his next match is Uddersfield at home now if that is called off then Jonty will  have to change his name to Jonah by deedpoll!
Posted by Andrew Butterwick at 14:12