Preview Track: Dedicated to ITV sport.
So the prophetic Leeds fans who stole the ITV microphone at Histon were finally vindicated this week for their crude assessment of ITV's FA Cup coverage.  For those with short memories the fans were able to regale the watching millions with a tuneless chorus of "ITV are F****** shit" before someone woke up and hit the mute button in the control booth.  Even Capt Birdseye had weighed in with his twopenneth calling the coverage of the 2nd round disaster "amateurish" as those watching at home had to put up with a rain soaked camera lens for the whole of the game giving the impression that you were watching through a goldfish bowl.

However even that farcical coverage was well beaten this week as ITV became an even bigger laughing stock as they covered the Everton/Liverpool replay.....................with exquisite timing they managed to flash an advert on for Tic Tac mints just as the only goal of the extra time game was scored by a delirious Everton youngster............ so the only thing the viewers saw in most of the UK were the goal celebrations!  In defence of the ITV producer he had probably fallen asleep like 90% of the rest of the viewers and forgotten to turn off the auto adverts as the game passed into extra time. 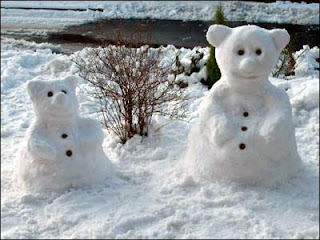 The other big news of the week has all been about the snow.  Yes we've had snow falling and yes it's not disappeared straight away and yes we've had further snow falling on top of the lot that came on Monday but why does everything come to a  grinding halt?
I can understand the southern softies in London stopping the buses, taxis & tube (how does snow get in the tube?)  but I always thought us northerners were made of sterner stuff.  Apparently not as our local schools followed the national trend and closed due to "Elf & safety" reasons even though the roads have remained as clear as Jonathan Ross' recent appointment diary.  The thing I don't understand is that it's deemed too dangerous for staff and students to get to school?........but not to get to the nearest snowy hill and hurtle down it at breakneck speed on a plastic sledge?  The world's gone mad!

The PC brigade have been mounting their high horses in droves this week as an ex Prime Minister's daughter compared some tennis player's hair do to that of a Golliwog.  I might be missing something but how can you be supposedly racist about someones hair?  As ever it's the white middle class do gooders who are shouting the loudest assuming that they "know" how "extremely offended" coloured people are when anyone mentions the word Golliwog..........that is unless it's a news reader, aforementioned do gooder or the BBC1 controller who have collectively boosted the sales of Golliwogs by there obsessive rantings on the matter.
Back on planet Football the admin staff at Leeds again showed their true colours by conspiring to miss the deadline for lodging Liam Dickinson's loan papers by 14 minutes.........ffs they had a full month to sort it out why did they leave it until the last minute?  Did Shaun Harvey used to work for ITV I wonder?
The fact is that Leeds spent absolutely nothing on transfers during the transfer window and given that most fans were hoping for some permanent new blood to boost the team for the promotion run in I don't think anyone is going to be more optimistic as a result of our January activity.  I am assuming that both Trundle and Carl Dickinson will return to their clubs after Monday's clash with the Wall and we will replace them with further loan signings.............and I had my tongue firmly in my cheek when a tagged our new manager as Larry the loan arranger!.
Have a good weekend and make good use of the free Saturday afternoon...........now where are the rules to the Jeff Stelling drinking game?
MOT
Posted by Andrew Butterwick at 07:56