The day didn't start too well.  First of all I was stood next the village idiot in the queue at Dawsons as he regaled the whole shop with utter banal rubbish in the loudest voice possible whilst making out he was my best mate!  Having never met him in my life I was considering all the options of shutting him up when he thankfully turned his attention to someone else.  I quickly tucked two of Dawson's famous pasties under my arm and made a hasty exit.  The next bit of bad news came from the Happy Chocker informing me that the Quiet One had failed a late fitness test for his Cup Final and was tucked up in bed with a heavy cold and sore throat. I hoped this wasn't the theme for the day ahead.
Hartlepool is a 2 hour drive from sunny Selby and HC and me were soon gunning up the A19 to Monkey Hanger country.  For those of you who are not sure where the Monkey Hanger tag originates from let me enlighten you.  In the Napoleonic wars as we battled the pesky French on all fronts an unfortunate French ship went down with all hands off the coast of Hartlepool.  As the wreckage washed up on the beach the sole survivor, a pet monkey, was clinging for dear life on part of the ship.  Now the good folk of Hartlepool had never seen a Frenchman before so on seeing the furry primate they mistakenly assumed he must be a Frenchman and subsequently interrogated him as a spy before hanging him from a bridge..........as you do.  There not the brightest bunch up there you know. 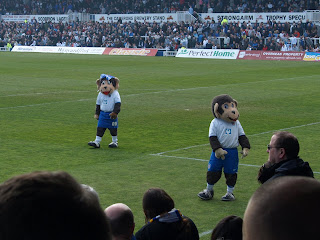 With the car safely parked we found our way to the marina for a pre match drink.
It was now that the Happy Chocker realised it wasn't quite summer as a biting breeze blew in off the inhospitable North sea and straight through his flimsy T shirt.  It was a strange atmosphere though with Leeds already secured in the play offs we had the luxury of not being too worried about the outcome of the forthcoming battle.  We rightly predicted that Brad Johnson would come in for the injured Snoddy and the rest of the team stay as it was.  Once inside the compact stadium with the rest of the 950 whites fans the noise levels shot up as soon as the first whistle blew.  Eddie and Al arrived with the Wakey warriors. 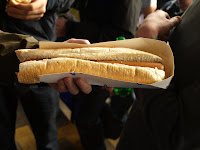 Al had obviously got hunger pangs from his ardious journey and demolished the biggest hot dog ever before the start of the game.  The fantastic Leeds away support started as they meant to go on with continuous chants even through half time, We all love Leeds, Leeds United Calypso, MOT, Glory Glory Leeds United amongst the many favourites given a good airing with a few Wemberlee chants mingled in.
Hartlepool started the match keen to snatch at least a point that would see them to safety from relegation.  In the opening exchanges they did create chances with Nardiello and Porter causing problems for the sturdy Leeds defence but with Sammy, Bam Bam and the full backs on top form as ever and Casper looking solid behind them a goal looked unlikely. 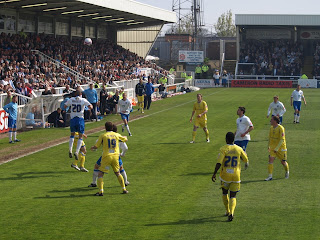 At the other end Leeds were creating good opportunities behind the rather static home defence and Mr Beckford has two excellent chances in the first quarter only to be denied by the agile Poolie goalie.  When Brad Johnson smashed a superb free kick against the bar most of the raucous Leeds fans thought we were 1 up but the ball bounced down off the underside and away to safety.  The game was not for the faint hearted and the robust Pool tackling was taking it's toll on Killa and Robbo in the midfield.  The midfield was looking good with incisive passing carving out chances for the hard working double Becks up front, Brad Johnson looking particularly impressive.
The game was entertaining end to end stuff sprinkled liberally with too many mistakes for the connoisseur and the only surprise was that the game got to half time without a goal despite Sammy SodOff rising to meet a corner only for the woodwork to deny Leeds again.
The constant drumming of the Leeds United Calypso continued through half time from the well refreshed whites fans.
This fan was confident that there was only one winner on the basis of the first half showing with the only slight downer the fact that we hadn't converted any of the numerous chances.
The 2nd half started pretty much as the first half had finished with chances at both ends but we didn't have to wait long for the stalemate to be broken as a spell of controlled passing freed up space for the ball to go to Beckford with his back to goal who turned his man effortlessly and planted the ball past the despairing goalie into the net in front of the ecstatic Leeds fans. 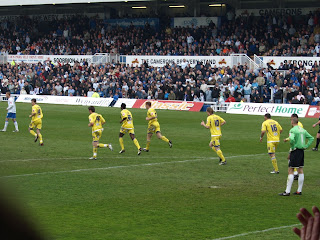 The celebrations were not only in the away stand and there was soon trouble on the Hartlepool terrace as the local chavs took exception to rogue Leeds fans on their patch.  This threatened to boil over as further Leeds fans got onto the pitch in a hopeful attempt to "help" their brethren.............but all it did was get them thrown out.
Leeds took control of the game from there on in, although Pool wasted a couple of chances Casper never looked really troubled.  If anyone was going to score again it was going to be Leeds as they took advantage of Pools eagerness to push forward and but for Leeds' keenness to have one extra pass we would have been cruising at 2 or 3 nil. Andy Hughes had done the most warming up I've ever seen, encouraged by the hero worship from the fans including an amusing ditty about Posh Spice and Beckham that made him smile.  His extended warming up was rewarded when he got his chance with Dickinson and Grella to strut their stuff for the last 10 minutes with Dicko creating an excellent chance for Lucianno to kill the game at the death.
So a good workman like performance to bring the curtain down on our away travels in the regular season which should give added confidence for the play off battles to come.  The Leeds players thanked the fans with Sammy giving his own unique version of the Leeds salute to his adoring hordes.  He had another awesome game today as did Naylor.  Man of the match I would give to Kilkenny for another industrious and influential performance and Johnson has given Larry a selection headache with a commanding show in place of Snoddy.
So after a relatively quick getaway a pleasing drive back to gods county in the setting sunshine........better still Spurs were 2 up at Old Trafford.  The Happy Chocker was busily working out the permutations at the top of the table before announcing that there is only one point separating Mk Dons, Millwall and ourselves going into the last weekend.  So it's still possible that we could finish 3rd.  Ever get the feeling that this is our year?
MOT.
Hartlepool 0 v 1 Leeds

Posted by Andrew Butterwick at 19:34