Yet again the weekend is upon us and excitement is in the air.  Scunthorpe's failure to beat Northampton on Tuesday confirmed the mathematical certainty of Leeds' play off place. 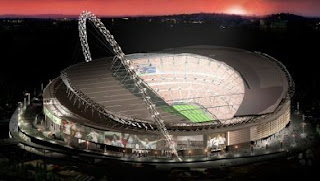 The present Mrs Marching on Together summed up a lot of fans thoughts on Wednesday morning.
Mrs MOT  "So does this mean you'll be going to Wembley again"
Me "Definitely..........well sort of definitely"
Mrs MOT "Well are you or not"
Me "First of all we've got to win the Semi Final but that shouldn't be a problem"
Mrs MOT "Oh....so who do you play"
Me "Not sure yet........could be Millwall, but it could MK Dons and then again it might be Scunny and if they slip up it will be Tranmere"
Mrs MOT "Mmmmmm and when is this Semi"
Me " Well again we're not quite sure yet it depends who we're playing and where we finish in the table"
Mrs MOT "So you're in the play offs but you don't know who or when your playing but you think you'll definitely be going to Wembley"
Me "Errr Yes"
At this point she rolled her eyes so hard they nearly became detached!  They just don't understand do they?
The one thing the play offs have done is start the scramble for semi final tickets and all the old arguments over who should and who shouldn't be able to get their hands on one have surfaced as another full house at ER looms.  At least this year I don't think there will be any queuing for tickets as the option for members & season ticket holders to buy 3 extra over and above their own should account for a sell out before our last game against the Cobblers of Northampton. 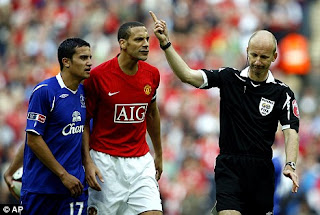 Away from Elland Road most right minded football fans will have had a smile on their faces this week at the memory of a certain Mr Ferguson going ballistic when Manure had an obvious penalty denied against Everton in the FA Cup semi final.  As he'd decided to totally disrespect the oldest cup competition in history and pick a team devoid of his star players in an arrogant gamble to balance resting his "tired" little angels but also reach the lucrative FA Cup final I don't think there was much sympathy winging it's way to the big red nosed one!
Speaking of resting players I was pleased to hear Larry confirm his views on keeping a winning team together and valuing momentum and consistency above the overvalued rotation system of selection.  So this weekend against the Monkey Hangers he will be sending out his strongest team available.  Delph will still be suspended and Snoddy's battered and bruised body has finally succumbed to the ankle injury he's been carrying these last few weeks.  It'll be interesting to see who he brings in for Snoddy? Brad Johnson seems to have the nod in front of Jesus of late but my bet would be he will give the ever reliable nutcase Hughesy a full run out in midfield thus resisting the option of moving Dougie from his new found home at right back into midfield.  It will be good if we can finish the season with two wins to take us into the lottery of the play offs on a high and I'm sure that the travelling "loyalty" fans will create a suitable carnival atmosphere on the last away trek of the regular season.  I'm not getting too hung up on what position we finish, who we play etc as I truly believe that the only team that can stop Leeds United returning to Wembley for back to back play off finals is..................Leeds United.  If we play to the potential and consistency Larry has created at the club then I'll soon be working on the logistics of getting to Wembley for a 1.15pm kick off.  Can't wait.
MOT
Posted by Andrew Butterwick at 07:47