Bright sunshine bathed Yorkshire's broad acres for the first game of the season at Elland Road. My usual partner in crime, the Happy Chocker, was absent without permission on a golf course somewhere so I had the pleasure of big Steve and son George's company on the way to the Theatre of Hope. After what seems like a lifetime since the last trip to ER the anticipation and buzz in the air was a heady mix with the warm July sunshine. Adding to the feeling that a new season was about to spring into life was the arrival of the Wycombe away tickets just before I set off. In a week when I'd had not one but two new job offers life was good. Billy's Bar was busy as was Elland Road with plenty of fans who had parted with £40 of their hard earned cash to sport the new Leeds away kit. As both big Steve and I are your typical tight arsed Yorkshiremen we were more than happy to argue that last seasons offerings of the blue & black and yellow away strips were "better" than the new one! I had forgone my usual spot in the kop choosing to bask in the sunshine on the half way line in the East Stand. A good crowd was already inside the ground when the tannoy announced that the kick off was delayed for 15 minutes due to crowd congestion outside. A good number of Blackburn fans had made the trip, obviously keen to see a decent sized crowd and stadium! 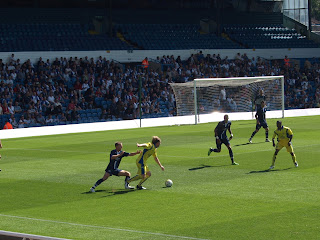 The first black mark on the afternoon was the guy who was sat next to me. He arrived to find someone sat in his seat. Despite the fact that the guy in the wrong seat was on crutches and his seat was directly behind his he insisted on fetching the steward to move him? What a knobhead................add to that he had a full over coat and woolly hat in the hot sunshine and looked as miserable as sin I could tell I was in for an enthralling 90 minutes discussing the finer points of the match with him!
Both teams sent out strong teams to contest the first half as the whistle soon signalled the start of the game on a flawless playing surface that looked as if each blade of grass had been cut by hand. Leeds started on the front foot and certainly didn't look out of their depth against their lofty opponents. Delph was busily pulling the strings in midfield looking a class apart. Double Becks up front were both troubling the ponderous Blackburn centre halves and at the back the pairing of Kisnorbo and Rui were solidly looking after Roberts, Diouf and Mcarthy. In goal was the new signing Higgs and as he came to confidently claim the first cross of the afternoon there was a purr of appreciation from the whites fans................we've not seen that for a long time. At the other end the onetime hero of Elland Road Paul Robinson was the busier keeper as he kept out shots from Beckford and saw a sizzler from Becchio creep over the bar before Delph strode imperiously through the Blackburn defence only to be denied by the post. Any neutral watching would have thought Leeds were the Premiership team as they revelled in the chance to show their skills. 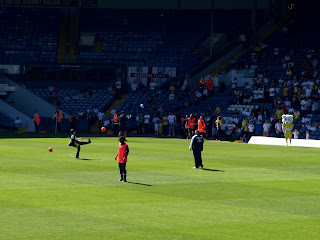 And it got better....................Delph jinked and turned and then sprayed a 45yd ball onto the run of Beckford who lobbed the advancing Leeds fan goalie only for a desperate defender to head clear. Can we start the league season now? As the half progressed Leeds just got more confident and Blackburns only serious attempt was a free kick that Pederson put meekly into the baying Kop. Even with Mr Miserable Git sat next to me I was on top of the world.
Half time came and the welcome return of the crossbar challenge. As I was trying to understand how to Tweet I heard the announcer declare that "Paul from Whitby" was about to chance his arm on the hallowed turf. As Paul is a facebook regular I aimed the camera ready to capture his moment of glory in smashing the ball onto the bar....................Oh dear poor old Paul well at least he got on to the pitch and had his 2 mins of fame! 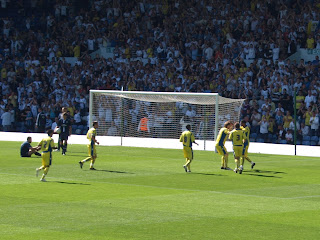 The 2nd half got under way with Leeds attacking the Kop. Paul Robinson received a rapturous welcome from his former worshipers and he returned the compliment in acknowledgement even signing autographs as the game was about to start. Top man!
Leeds continued to dominate and after Snoddy had won a corner and delivered a perfect cross onto Becchios head JB turned in the opener past a helpless Robbo. 1:0 and no more than we deserved. The boisterous Rovers fans were quietened as the decibel level lifted in the North Stand.................."Premiership yer aving a laf" rung round the ground in justifiable rhythm. 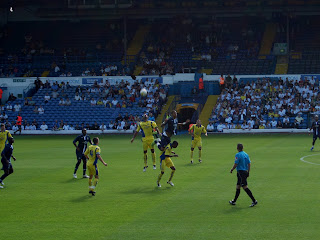 Soon after Robbo left the field to a tumultuous ovation, throwing his gloves into the kop in appreciation of the warm welcome he'd received.
Leeds were still having the better of the game but as the inevitable numerous substitutes entered the fray the game's tempo changed and Blackburn flickered into life sparked by the arrival of Dunn. Leeds looked decidedly more suspect on their left flank with Sheehan and our Robbo now in situ. And it was down that flank that Blackburn exploited gaining a last minute penalty that took some of the sheen off a fine Leeds performance and ensuring that honours were even, at least on the score sheet, at the end of an entertaining game. 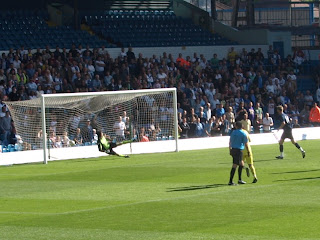 The positives for Leeds were the solid defence with Krisnorbo having an encouraging start even though he does look a tad lightweight. Rui played well alongside him and Parker just seems to get better with each game. In midfield Delph was exquisite, Howson was too generous in his mis laid passes and Snoddy was a constant threat, although his lack of pace was highlighted by the swift Blackburn full back. Up front Becchio was at his bustling best whilst Becks looked dangerous each time he got the ball. Of the subs Grella again found himself offside more than on, Enoch was..................well Enoch and Robbo played on the periphery. Higgs in goal had an outstanding game confidently dealing with every cross and shot that came his way.............somehow don't think Casper's going to be happy this year.
All in all an excellent performance and Leeds are coming to the boil just in time for the season's kick off...............just hope we can keep Delph but with more performances like this one that becomes more unlikely.
I wonder if Mr Miserable Git has smiled yet?
MOT
Posted by Andrew Butterwick at 09:05

Good to be back MOT!! Wish you would send some of that Yorkshire sun over to Ireland, lol.

Sounds like a very promising performance. I thought Kisnorbo was a left back, do you think he is likely to act as cover for Rui/Bam Bam or slot into left back?

And Higgs sounds promising. Looks like you were impressed.

Oh, any news on the Chinese murder mystery? Was it ever solved?

Looking forward to the new season with renewed optimism!!

Peter,
don't think Bam Bam's going to be ready for Exeter so Mr Krisnorbo should slot straight in at Centre Back. Higgs was very impressive yesterday so I think he could add a bit more solidity to the defence.....sorry Casper. As for the "Chink in the Sink" a man was actually arrested for the murder last week but the police have not released any further details.
With regards Sunny Yorkshire it's now pissing down!
As ever thanks for the comments.
MOT