This week has seen a burst of pre season activity at ER. In a classic case of left hand not talking to right hand Leeds United played two friendlies on Tuesday night at the footballing hotbeds of Wealdstone and Grimsby. At Wealdstone the old partnership of Becks and Tres got an outing in a low key match that the mighty whites managed to play the obliging visitors in losing 2:1 to the non league outfit. A good turn out of southern based Leeds fans, including Jonty and Noah, went along to practice their singing and ease themselves into that frustrating feeling that accompanies watching Leeds of late. Back at the appropriately named GRIMsby the stronger Leeds team were getting a half time bollocking for an unacceptable first half performance that saw Leeds trailing 1:0. Becchio was clearly listening intently as he grabbed the equaliser early in the 2nd half to ensure an honorable draw. The pre season games are now coming thick and fast with next weeks games against Blackburn, Toonland and Burnley completing the preparation for our first tussle of the League season with the Grecians of Exeter. Things seem to be coming along OK with my only real concern is who is going to fill the centreback berths especially if Bam Bam's not ready. I think it's safe enough to assume that the cult hero Sammy won't be plying his trade at ER this season so along with the new signing, detailed below, we have Hunts and Rui.......let's leave Lubo out of this equation! 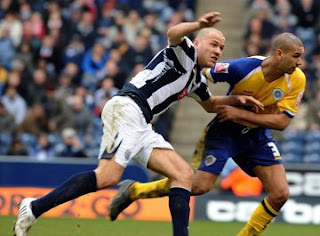 On the transfer front Larry has pulled off a coup in securing Patrick Kisnorbo's signature in competition with Derby and Palace. As Lubo has done nothing in pre season to dispel the belief that his qualities as a defender compare nicely to King Canute's attempts to stop the tide coming in, news that a strong and aggressive centre back is now pushing for a starting place against Exeter is welcome to the majority of whites fanatics. I'll be running the rule over the Australian international on Saturday against Mr Allardyce's charges.
(http://en.wikipedia.org/wiki/Patrick_Kisnorbo )
Talking of big Sam I could have some fun on Saturday as I have been mistaken for the gum chewing ex Bolton centre half on more than one occasion. The last time was when I was on a cruise in the Med when two ladies from Bolton were convinced I was their erstwhile hero and tracked my every move for the first week until in the end I signed their autograph book! Well it was easier than trying to convince them I was a better Centre half than Sam!!!! They did look a tad strange though when they later saw me again as I proudly walked around Rome with my Leeds shirt on............... 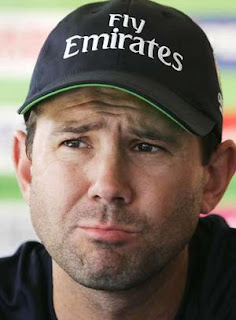 News also this week that plans are at an advanced stage to build an Ice Hockey arena at ER to house, believe it or not, an Ice Hockey team. we've had that many "plans" unveiled for the famous old stadium I'll believe it when I see it.
I can't resist a mention of our triumph at the home of cricket this week against our colonial friends from down under..................just hope the exiled blog readers in Oz are making the most of the situation? And as for the Aussie blog readers then apologies for dancing on your grave......te he hee. One question though.............why does Ricky Ponting always look as if he's going to burst into tears?
Finally why is it that teams who play in black and white stripes always seem to run their clubs like a Xmas pantomime. Newcastle's troubles have been well documented but now we have Notts County muscling in on their territory.
First a "Middle East Consortium" take over the club with Zillions of pounds to invest in the club and then they appoint Sven Goran Errikson as their Director of Football? Seems to me that Sven has been taken for a ride again on this one............I think what's happened is that somebody with a sense of humour was a bit bored or pissed or both one night in a pub in Nottingham and came up with a master plan. So he dressed up draped in a sheet and a towel on his head and approached the Notts County board declaring an interest in returning the mighty Notts County to their former glory through multi million pound investments. 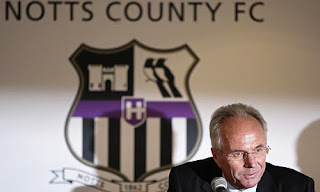 Problem was the board believed him and suddenly he was in charge of the club........................so in for a penny in for a pound he rings Sven, who's at a bit of a loose end since losing the Mexico job, and offers him silly money to come to Meadow Lane. Of course Sven who thinks of only two things, what's in his wallet and what's in his trousers, took the bait and next thing he's paraded in front of the press with a Notts County scarf in hand.
Well alright that's probably not exactly how it panned out but the reality is just as daft and inevitably will end in tears................................You just can't see Sven being up for an away game at Accrington Stanley on a wet Wednesday in January can you?
Funny old game isn't it?
MOT
Posted by Andrew Butterwick at 08:00