7.15am Saturday morning and I'm knocking the Happy Chocker and the Quiet One up ready for the long trip to Essex for our clash with the U's. HC's surprise at my early arrival was due to a last minute SOS from the Wakey Warriors who had lost their lift to the game and had desperately asked for help to get to the game. I couldn't leave fellow fanatics stranded so we found ourselves on an 80 mile detour to pick up Al and Nathan from Horbury and after some rather vague telephone directions the two anxious whites fans were on board. I don't think Al will get a job voicing up Tom Tom though!
We were soon into our traditional trivia quizzes designed to numb some of the 4 hour journey to the Weston Homes Community Stadium. A full car on an away day road trip is a special experience and today was no exception as convivial joviality and mutual ragging went on a pace. the atmosphere changed though as we reached Colchester. The various navigating map readers in the car were studiously trying to figure out where we were when the Quiet One pointed out that the stadium was immediately to our right. Simples!
Big mistake though to then try and find our way into town to park up but suffice to say after numerous circuits of the town centre and lot's of cursing at the map an hour later we were in the Albert pub having a swift half. 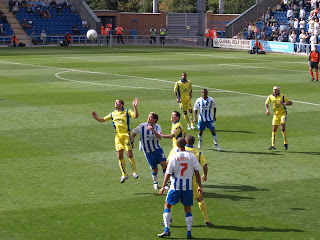 The pub was full of whites fans a buzz with the news that we had drawn the mighty Liverpool at ER in the next round of the cup. As Jonty tucked into his Prawn cocktail and steak lunch Mark Viduka & Alan Smith's names drifted above the throng as our success starved fans relished the chance to go toe to toe with one of our biggest erstwhile rivals at a full ER. Magic. Reality dawned though as we then scuttled off to the shuttle bus for today's opponents.......Colchester United.
Confusion in the ground as last years away stands had been moved to the other end of the ground and as the game kicked off there were still plenty of Leeds fans queuing to get into what was another eventual away day sell out. Beckford was in the team, phew, and the team was unchanged as expected. It was a blustery and warm sunny day in this part of North Essex as Leeds launched into their attempt to record their 7th win on the bounce for this season.
The early exchanges were frenetic as the U's knocked the ball about with a confidence belying their recent upheaval and Leeds responding with some robust attacking play. Beckford soon had the ball in the net with breathtaking ease but the linesman's flag prevented Leeds going ahead. Ample evidence of why I will give a huge sigh of relief if come Wednesday morning he's still training at Thorp Arch! Before you could say "The sun's bloody hot again" Becks had the ball in the net again with the same result as the over eager linesman went a tad too far to please the home fans behind him. In between time the hulk of a Colchester defender had figured out that Jermaine couldn't score if his lower legs were removed at the knee and proceeded to attempt that less than delicate operation. Remarkably he didn't even get booked. I politely tried to advise the ref of his appalling leniency. Too many times in this match both sets of fans had cause to berate the over pedantic referee who had learnt his trade in the "everyone's come to watch me blow my whistle" ref's college. 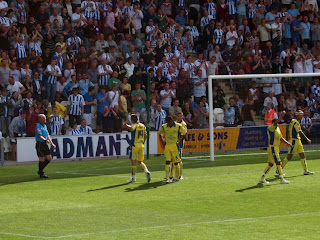 Colchester gave as good as they got in the first half with their tricky midfield feeding their front line and Shane Higgs and his defence had to be on their toes more than once to keep the scoresheet blank. At the other end Snoddy had picked up from his improved performance against Watford and skimmed the bar with a stinging free kick. HT and goalless but a very tight game that was finely balanced. I texted big Steve to let him know the score as he sunned himself in Spain, well you can't get Radio Leeds there!
Nelly, fresh from escaping from London and his Rugby Final trip, came to exchange thoughts on the game and then the action restarted.
Those fans who had decided to just have another HT beer missed the opening goal. Leeds got a disputed free kick near the corner flag and Snoddy floated it onto Bradder's head who flicked it into the net with ecstatic simplicity. Johnson's celebration nearly earned him a second yellow from Mr Pedantic but thankfully common sense prevailed from the man in charge. (did I just say that?) The goal was just reward for another excellent shift from Johnson who has added an extra dimension to our left hand flank with his cultured left foot.
The away hordes delight lasted just 10 minutes as Rui seemingly sauntered as he tried to clear a ball into the box............."don't let him turn you".......but he did..........."don't bring him down".........but he did and although the challenge seemed to be of the strength that wouldn't even knock over Eduardo the lack of protests from the Leeds players indicated the correct decision. Lisbie converted the penalty and the game was all square.
This season Leeds have found an inner strength when things aren't quite going to plan and this was to the fore as they battled to keep their100% record. Howson and Doyle were scrapping for every morsel in midfield, Becchio was battling for every lost cause and the Kisnorbo led defence was absolutely solid. Colchester couldn't resist the urge to push on looking for the winner but this gave the advantage to the more disciplined Yorkshire team and gaps started to appear for double Bex to exploit up front. Who else but Mr Beckford regained the advantage for Leeds when he pounced on a pressured mis clearance from Colchester and screwed the ball into the net for his 5th goal in 5 league starts this season. There's a nice symmetry to that don't you think? 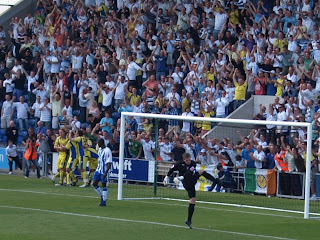 There was still 25 minutes left and Leeds needed all their new found resolve to withstand all that the U's threw at them but it was Becchio who nearly scored the next goal after a typical bustling run worked the ball onto his favourite left foot only to see his shot squirm past the post.
Prutton came on for for a tiring Snoddy as Leeds professionally saw the last 10 minutes out with relative ease helped by an energetic cameo by big Enoch.
So a 7th straight win of the season for the whites sent their fans home happy despite the long trip ahead. Another fine team performance with the only blip being Rui's mistake for the penalty. He left the field with 5 minutes to go with an injury and with Kisnorbo missing next week on international duty I suspect the treatment room at Thorp Arch will be an anxious place this week?
MOM could be anyone of Kisnorbo, Howson, Johnson, Snoddy or Beckford in fact the whole team battled to their potential.
Once we'd escaped the excruciating slow shuttle bus queue and ride back to the car park we gunned the faithful car back up North. More quiz questions to the background of 5 live's commentary on the Gooners against Manure. It didn't seem long until the car was back on the drive but the clock was just on 11pm. A classic away day and the right result. Magic.
MOT

Posted by Andrew Butterwick at 08:44

Great report as usual MOT, always more balanced than the official one on the LUFC website!! Great to see the goals too, many thanks.

Looks like a very composed performance from the boys in what I guessed was going to be a tight game.

And your 0-2 prediction was almost spot on too, scary indeed!!

Charlton are looking very good too, relegation does not seem to have affected them too much, just like Leicester last year. Fingers crossed.

Just became a follower of your blog a great Read very enjoyable! Keep up the good work looking forward to your next one! MOT!

Peter & WT Sea Eagle,
thanks for the comments.
With Mr B staying at least until January I can see us having a commanding lead come Xmas day.
Roll on Saturday and the visit of Stockport and the joy of eight!
MOT