So after the euphoria of last week it was back to the reality of Division 3 football and the visit of Wycombe. Before setting off I caught Lord Grayson getting his performance of the week award on Sky and the lads on Soccer Saturday debating all things Leeds for 25 minutes. I didn't know that Paul Merson talked so much bollox?
The Happy Chocker's brother arrived to save me from more torture from the ex Arsenal wino and we were off to ER suitably clothed in more layers than an onion to keep out the Arctic type weather. The groundstaff at Fortress ER had done a magnificent job in ensuring the game went ahead thus avoiding yet another midweek game. The picture postcard scenery on Elland Road masked a vicious cold snap that nipped at any part of your anatomy that was left exposed. Definitely not a day for swinging your shirt around your head at HT! 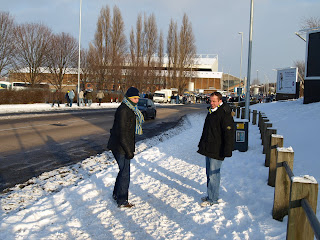 The pre match chat with big Steve inevitably surrounded the Beckford transfer saga which we enjoyed while watching a rerun of last Sunday's triumph in the Kop bar. Eddie arrived with my precious ticket for Exeter next week and we were all set for the return of our all conquering heroes.
After beating Manure surely lowly Wycombe wouldn't present any problems? Beckford started the game and got a reasonable reception with a couple of choruses of his name sung from the Kop. Leeds got off to a good start and before the first stage of frostbite attacked my toes Jonny Howson had rattled in the first goal. How easy was this going to be? The healthy crowd of over 24k clearly felt that a potential massacre was on the cards. But before you could say "after the Lord Mayors show" Casper's woodwork was rattled by a curling shot from the lively frontman from the visitors. Wonder if Shrek was watching? If that wasn't enough Howson inexplicably let a Wycombe corner pass between him and the post and nearly bounce in off Crowe. And when another Wycombe attack ended with a wild shot into the baying kop alarm bells were ringing. "are you Rooney in disguise" taunted the Leeds fans. At the other end Becchio looked off colour but Beckford escaped his marker and just lobbed the ball over the bar.
For a team in the bottom two Wycombe looked far better than their position suggests. Prince Harry was again leading the line for them but it was the young Michael Jackson lookalike who was causing the most problems. Beckford was then dragged down by a defender and Snoddy had a free kick in almost the same position as last week. He chose to go for the opposite corner this time and skimmed the ball over the bar. As half time approached the scrappy game was doing nothing to take my mind off at least 5 toes suffering with severe frostbite. Going in 1.0 up Leeds couldn't be happy with the under par performance. Lord Grayson's version of the hair dryer would be given an outing I thought.
Big Steve made a valid point in the toilet at HT. "We scored too early" he succinctly observed.
The cold weather was the definite winner so far. Even the stewrads couldn't be arsed to ask anyone to sit down. 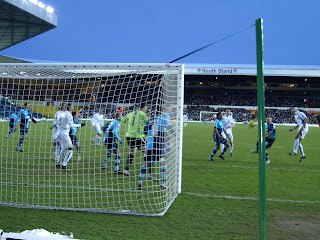 The 2nd half started with Leeds attacking the expectant Kop needing a another goal to make the game safe. But other than a post HT team talk splutter Leeds weren't firing on 3 cylinders never mind 4. Kissy got forward and drew a good save from Shearer in the Wycombe goal but it was the away team who looked the more likely and it was no surprise when they scored a deserved equaliser. Surely this would kick start Leeds? Errr no..............if anything Wycombe looked the team likely to pinch a winner and nearly did on at least two occasions.
Mad Max came on for Snoddy and then Grella and White got a run but the trademark final surge from the mighty whites never materialised and the game fizzled out into an honourable draw. Hypothermia was only just avoided as we got back to the warmth of the car. Difficult to name any Leeds player who played to their potential other than possibly the rock that is Kisnorbo. Beckford had a busy game but in truth the service to both him and Becchio was very poor. The long ball over the top to utilise the want away striker was easily dealt with by the Chairboys defence and Leeds didn't have the sense to try routes out wide. All in all a disappointing day..............but these are games we would undoubtedly have lost before Simon the Messiah arrived and it was rather fitting that we have now gone a full calendar year at Fortress ER since we lost a league game. One good thing from the day.
In stark contrast to last week's champagne and roast dinner waiting when I got in this week it was Egg and Chips and a can of John Smiths.............sort of summed up the day.
Exeter next week, weather permitting. Wonder if a certain Mr Beckford will still be with us?
Can't wait.
MOT
In Grayson we Trust.

Posted by Andrew Butterwick at 19:07

Thought Beckford played well, tracking back and actually scrapping for once.

It was a poor showing overall, but hopefully just a one off.

Good post and good to have you back. Marching on together, TSS.

Hi MOT,
Will defo take you up on the pint at ER, disappointed with the result but its a point closer to the finishing line, once again eddie was irritating on LUTV and
Tip mate.... when i worked on sites in uk at winter time, we used to use polystyrine tiles cut as insoles in our boots...feet were toast all day.
Good Luck..... QW

TSS,
Agree with the Beckford comment. Thought his performance at Ot was his best yet but the transfer talk seems to have fired him up. All grist to the mill for us.

WT Sea Eagle,
Thanks for the comments & keep reading.

Qatar
Thanks for the cold feet tip. I used to rub Vic on my feet when I played in cold conditions that used to work as well. Might try the poly tiles at Exeter!
MOT