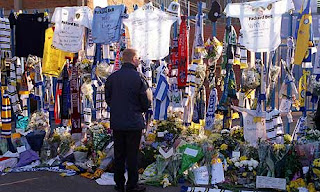 Traditionally Easter has always been a big weekend in deciding the fortunes of football clubs up and down the country and this holiday weekend will be no different. Question is come Monday night who will be the happy little Easter bunnies and who will be in need of a miracle Resurrection?
In those halcyon days before Xmas when we were flying high at the top of the league this weekend was touted as a possible promotion celebration weekend. Indeed if we had continued with the form that took us to the top of the table at the close of the year our points total would already by 92 before this weekend's games..................job done as someone infamously said!
But that would have been far too easy so with abundant generosity to all teams in the last 15 games Leeds have yielded a miserly 15 points and we are now back on level terms with our friends from Bermondsey. Can we turn it round? Well we have more or less the same players who got us to the top and also stunned Salford Yanks and Spurs in the Cup. Problem is we've suddenly lost the ability to score goals. Worse than that we seem to be allergic to shooting on target as most opposing goalies leave the pitch at the end of the game with their kit in pristine condition. Beckford has been at his impotent and frustrating worst, Becchio looks laboured and very very one footed and the goals from midfield, never the most fruitful source, have dried up completely. Larry's golden touch with the loan market has wained with some less than inspiring arrivals at ER. So it would be easy to take a leaf from Dad's Army's Private Frazer's book and think "we're all doomed" as many success starved and battered whites fans have.
So what are the positives? Firstly and most importantly our destiny is still in our own hands. Despite our poor run of form we are still in an automatic promotion spot albeit by the slenderest of margins. Secondly there is still a glimmer of hope in the way we got the ball down and played at Norwich showing that we haven't forgotten how we got to the top of the table in the first place. Add to that the fact that the finishing line is agonisingly close with only 8 games remaining Leeds are quite capable of mounting one last push. We just need to winkle out 6 wins starting with 2 this weekend against Swindon at ER and away to the Jolly Green Giants of Yeovil. Sounds possible?....................course it does. And what more fitting tribute to the memories of the two murdered Leeds fans, Christopher Loftus & Kevin Speight, if we could get the promotion train back on track with 6 points on the weekend of the 10th anniversary of their tragic deaths in Istanbul?
I watched Barca annihilate Arsenal 2.2 this week with a brand of football that is quite simply devine and light years away from what we are served up each week. How an earth can a team be so dominant for long periods come away with only a draw is beyond me..............but then again it's been said before and will be said again "Football's a funny old game" Is it funny enough for a team to suddenly turn relegation form into promotion form for the last 8 games? We're about to find out!
Please fasten your seat belts as flight LUFC09/10 bound for the championship attempts a difficult landing.
Can't wait.
Keep the faith
MOT
Posted by Andrew Butterwick at 09:50