So after a summer of waiting and speculating it was here.  The first league game of the season.  The return of "normal" Saturdays.  Good bye tedious shopping trips & troublesome DIY jobs this is why God included Saturday in his week..............so that the populous can watch their local team (Manure fans excluded) fight it out with other such teams whilst enjoying copious refreshment and the company of the extended family of said Football club.  So it was that the Happy Chocker and I were once again on Selby station awaiting our carriage to Leeds.  Some things hadn't changed, the No 2 platform sign was still swinging in the breeze with an annoying squeak and the same old cheery station staff were there to serve our every need!  A few new faces were amongst the usual crowd of Leeds fanatics as we joined the unusually long train.

First games of the season are always eagerly awaited as a sign of what lays ahead for the team on the rocky road to next May so we set about debating today's game.  How good are the new signings? Have they improved the quality of the side?  Who will start in goals?  Will Naylor be fit? Is this a year for consolidating? Will Capt Birdseye sanction any transfer funds?  What will our new seats in the Captains Lounge be like? Why is Robbie Savage such a twat but you can't help liking him? Have we signed Jay Simpson or not?  Is he any good if we have? What about Adam Clayton?  All of these questions and more we given a good airing as we made our way to the Theatre of Hope. 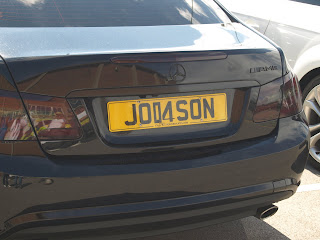 After a quick game of guess the personalised number plates of the players in the car park (check out the slideshow) we were in the Captains Lounge bar. Barry Copley and Nelly were found in there confirming my thoughts that this was a resting place for the more mature Leeds addicts!

News that Schmeichel had beaten Higgs to the starting jersey wasn't universally welcome.  He would soon dispel the doubters though. Naylor was also in the starting line up as Lord Larry made the best of a bad job with his strikers, or lack of them, and deployed Becchio as a lone striker with 5 spread across midfield.

The game started with a bang as chances flowed at each end.  The TV guys would be pleased.  Derby's style of neat Football played on the deck was so typical of the Clough dynasty..............as if to remind the watching millions on TV who the daddy was the kop belted out a chorus of "there's only one Don Revie"

Kris Commons started as he meant to go along as he ghosted past the Leeds midfield and defence before firing a stinging shot just over the bar.............Mmmm alarm bells were already ringing.  They became deafening as Jonny Howson lost the ball cheaply on the half way and a Commons inspired move ended with former Leeds favourite, Hulse blasting an unstoppable shot past Kasper.  His lack of celebration was appreciated by the more knowledgeable fans.  Welcome to the Championship, one mistake and one nil down.
Howson soon made up for his error by robbing Savage of the ball, surging into the box before delivering the ball on a plate for Becchio to equalise. Get in!!!!!!   Leeds United were up and running in the Championship.
Derby's passing was a lot more assured and crisper than Leeds but it was the mighty whites who nearly took the lead as Naylor swivelled and rattled the bar with a volley.  It was Derby who scored next though as Sam was harshly adjudged to have taken the man and not the ball inside the area and Commons coolly dispatched the penalty.  When he stole in behind the Leeds defence to test Schmeichel's alertness moments later I began to fear for Leeds.  Their defence looked about as organised and structured as a Chimpanzee's tea party.  Bessone looked to be suffering from first night nerves and Naylor was exposed with his lack of pace.
Half time came with the score still 2.1 but the harsh reality of the challenge of the Championship was already there for everyone to see. 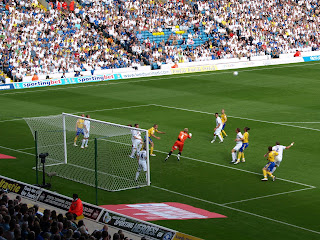 The 2nd half was the Kasper Schmeichel show.  Time and again he spread his frame to prevent Derby increasing their lead in the same style his Father graced the Premiership for many years.  His double save in front of the South Stand brought gasps of admiration from all round the ground.  I could almost hear the TV commentator saying "His dad would have been proud of that"

Remarkably there were no goals in the 2nd half.  The difference between the teams was most sharply seen as Leeds pushed on for a desperate equaliser with a tactic that can only be described as "Alehouse football" as ball after ball was launched by the aerial route towards the Derby goal.  Adam Clayton came on for the last 15 minutes and had some nice touches.  Savage threw a paddy with the ref as he gave away a free kick but all in all Derby ran out comfortable winners.

Lord Larry's team building is clearly work in progress and the loss of 4 key players was always going to be a difficult cross to bear in this tough opener. They look to be lacking a good defensive midfielder, creative central defender and goal scorer on the evidence of today though.  The artistic Mr Paynter may solve the goal scoring and Kissy will shore up the back line when he returns but I suspect the faithful loan market will be in full swing once the transfer window closes?

Rob Hulse showed his fondness of Leeds by applauding the kop before he went to the celebrating Derby fans.  wonder if he wants to move back?
Post match debates in Wetherspoons with Turkey twizzler, Jason and brainbox didn't resolve anything but we all felt better and slightly more inebriated as we boarded the last train home.  Also met up with another twitterwhite, LUFCmadferret before trudging home.
A bad day was made worse as the Happy Chocker discovered he'd lost his wallet when he went to pay for his Chicken Joe Frazier....................Life has a habit of kicking you when you are down!

Only 45 games to go now.  Any optimistic predictions of success this season shouldn't be rethought after just one game but we were clearly 2nd best today both in result terms and the quality of the football played.  But then again when did Leeds do anything easy?

Lincoln in the League Cup on Tuesday and a chance to progress? David Somma will be back for this one against his former team mates from last year. Hopefully we can get a bit of confidence before our trip to Forest next Sunday.  I do hope so.
Can't wait!
MOT

Posted by Andrew Butterwick at 10:59