After being savaged by the rampant Rams on Saturday this supporter was looking for an improvement against the Imps from Lincoln in this Carling Cup tie.  The Happy Chocker and the Quiet One accompanied me into the kop bar for the all important pre match drink and debate about tonight's chances and more to the point Saturday's reverse to Derby.  Big Steve and George were there too to add to the lively discussion.  Big Steve was giving his best impression of Mr Grumpy as he went through all that was wrong with the team and how poorly we had played on Saturday.  Nothing could be said to remove the big dark cloud hanging over his head as he trudged off to find his seat although I did remind him there is another 45 league games to go and perhaps it's a bit harsh to draw too many conclusions from the first 90 minutes of action! 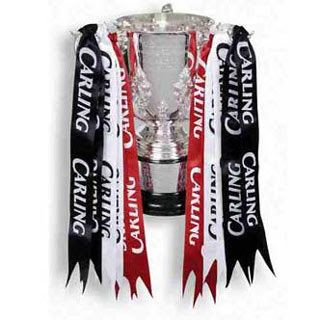 I must admit I was a bit apprehensive though as we kicked off against lowly Lincoln.  We hadn't played well against Derby and the defence and centre midfield had looked vulnerable.  Alex Bruce replaced Naylor at the back in the only change from Saturday but then again Lord Larry doesn't have a great deal of options to choose from with the number of suspensions and injuries currently hitting the squad.

What we needed was a flying start and sure enough within 2 minutes we were one up courtesy of some neat build up play and the twinkle toes of Lloyd Sam delivering a pin point cross onto Jonny Howson's head who gratefully gobbled up the chance in front of the South Stand well filled with expectant away fans.  The dark clouds above big Steve's head started to clear.  5 minutes later they were blown away as further Leeds pressure resulted in a combination of Bradders and Watt unpicking the fragile visiting defence to present Becchio with a chance he eagerly took. 2:0 and we were cruising.

Killa was relishing the space he was finding in midfield as Leeds took complete control without really getting out of 2nd gear.  Wave after wave of white shirts pushed forward and only some resolute goalkeeping combined with over indulgent passing by Leeds prevented the score from increasing..................that is until Lloyd Sam finished the game as contest on 30 minutes with another simple header after a cross from Connelly.  I say Lloyd Sam because that's who I think scored because from the stands I'm finding it difficult to distinguish between Sam and Watt.  They even had the same colour boots on!  Might be easier if I just called them both Sammy Watt?

The game meandered to half time with Kasper contributing no more than one routine save and two waves of acknowledgement to the vociferous kop for the first 45 minutes.  Seat belts, safety harnesses definitely not needed tonight as the game developed into no more than training exercise for the mighty whites.
If the ease at which Leeds had closed out this game in the first half had cleared Big Steve's black cloud I suspect some of it may have returned in the final 45 minutes as too many attempted intricate passing movements broke down as Lincoln decided to drop 10 men behind the ball in a vain damage limitation exercise.  They even exposed the soft underbelly of our defensive frailties by breaking quickly down the right on more than one occasion.  Mr Bessone was doing nothing to convince the many doubters of his ability in the Leeds crowd. Leeds did have plenty of possession but I'm sure Lord Larry won't have been entirely happy with the 2nd half showing as the team were guilty of "over egging the pudding" on numerous occasion's. On 70 minutes Killa increased Lincoln's misery with a 4th goal from the spot after Sam had turned back into traffic when the outside option was clearer only for two Lincoln players to bundle him over.
As Bumble would say "start the car"

Howson, Becchio and Johnson vacated the field to give Grella, White and the ever popular Hughes a run as the game concluded with a comfortable win for Leeds.  It's still early days but this win will give us some much needed confidence going into the clash with Forest on Sunday especially as they crashed out of the cup at Bradford.  All in all this wasn't a game that got the pulse racing as Leeds effectively killed the match in the first 7 minutes leaving the remaining 83 minutes stress free and not a worry in sight.  Now there's not many times you can say that at Elland Road!  Sunday will no doubt be tougher but you can only beat what's in front of you and to quote Forest's obnoxious little manager it was certainly a case of "job done" tonight.

Sunday lunchtime at Forest next.  Hope we've got a bit of cover for Becchio by then, the defence have settled their early season nerves and Sammy Watt is on form....................if we do it could be a pleasant Sunday afternoon in Robin Hood country.
Can't wait.
MOT
Posted by Andrew Butterwick at 23:44