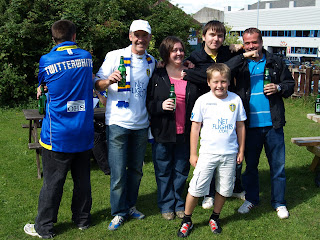 The sun was cracking the pavements as the Happy Chocker, Quiet One and yours truly arrived at ER heading for the famous Peacock pub for our pre match refreshments.  With our friends from Millwall in town there was an interesting mix of smells wafting down Elland Road as the aroma of dubious burger stands competed with the numerous Police Horse deposits left along the famous old street.  The beer garden was bathed in glorious sunshine as we pondered the forthcoming game over a couple of Carlsbergs in the company of various Twitterwhites. Will Lord Larry stick with the 4.5.1 formation?  Will Naylor keep his place in competition from Alex Bruce? Can we stop a Millwall team that have already banked two straight wins?.  As the beers took their effect the responses became more positive and by the time we took our seats amongst a healthy 25k lunchtime crowd confidence was surging through this fan's veins.

The Millwall fans who had endured the voucher and ticket treasure trail at Woolley services had nearly filled half of the cheese wedge and added to the lively atmosphere inside the ground.  My 2.0 prediction felt a bit optimistic as the game kicked off in bright sunshine.  Leeds started on the front foot and were soon knocking the ball about with a renewed confidence borne out of last Sunday's 2nd half performance.  Sanchez Watt, still wearing the same yellow boots as Sam, tested the Wall goalie with an audacious chip from 25 yards that just grazed the bar.  Mmmmm this looked good.  My fear that Millwall would be too strong for the soft underbelly of the Leeds midfield certainly looked unfounded as both Howson and Killkenny strutted about in midfield like two Peacock's preening their colourful feathers.  Then just as I was daring to think this could be our day Millwall scored...............or should I say Richard Naylor scored in his own net. An almighty up and under was launched into the Leeds box and as the Leeds capt rose to head clear he seemed to twist and his header looped effortlessly into the top corner out of Kasper's reach.  Stunned silence invaded the ground with the exception of the delirious Jellied Eel munchers in the cheese wedge.

The goal shook Leeds and the next 5 minutes there were some nervy players in the famous white shirts but the ship steadied as Leeds' newly found liking for playing the ball on the deck paid handsome dividends.  Johnson had a header blocked, a neat move orchestrated by Howson saw the hard working Becchio hit the ball over the top and then a sweet move involving watt and Killa saw the latter find Howson who weaved past the last defender only to hit the post with his shot.  This was good.  This was very good.  The crowd, lifted by the free flowing football, urged the whites forward as they took complete control of the game.

Lloyd Sam was revelling in the space the Wall defenders were giving him and he nearly scored as he rounded the hesitant Forde in the Millwall goal only for the defender to scramble the ball away.  But the continual tide of attacks finally paid off on the half hour as Sam coolly finished off yet more neat passing involving Watt, Howson and finally the ringmaster Kilkenny. The second goal was greeted with a roar to frighten any Lion. 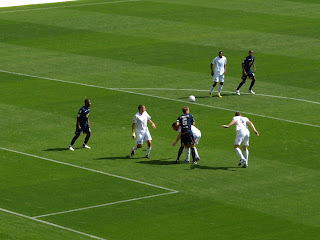 Millwall were definitely on the ropes and were grateful for the half time whistle as Howson, Watt, Collins and  Johnson all went near to adding to the Leeds tally before the break.  The beaming faces around me in the crowd told their own story in complete contrast to the worried frowns endured by most fans at the same time on the opening day.

The shrewd Millwall manager Kenny Jackett changed his midfield to try and combat the rampant whites and for the first part of the 2nd half it had some effect as the Lions tried to batten down the hatches and survive another onslaught.  Becchio was working like a Trojan as the lone frontman and causing the usually robust back line plenty of problems.  The Millwall goalie Forde was not having a good afternoon.  He foolishly thumped his badge at the kop as he came out for the 2nd half.  Oooooh I thought you might regret doing that Mr Forde. When he allowed a simple pass back to roll over his foot for a corner I'm sure he thought the same.

The game entered the last 15 minutes with Wall looking as if they might just hold out.  Then Lord Larry changed the game by bringing on Davide Somma to share the front running duties with Becchio.  within 3 minutes he was milking the applause of the kop after coolly slamming home a cross into the net after Forde had flapped at a cross and the wall defence failed to clear.  A star is born. 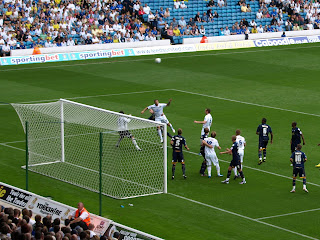 The Leeds fans were now joyfully cheering the "new much improved" Leeds United's every move.............Sam had a header clawed back from over the line by the hapless Forde but the ref chose to play on?................ but when Howson capped a fine performance with an identical 70 yard cross field pass to "that" one at the Theatre of Shite and found Davide Somma in space everyone was out of their seats.  Somma coolly controlled the ball with his yellow boots moved in on the Millwall goal and rifled a thunderbolt past the unfortunate Forde.  Thump your badge on that Mr Forde.  3.1 and game over.  The adulation that Somma received was un abating.  The final whistle went well and truly signalling Leeds' arrival in the Championship.

The walk to the car park was alive with excited chatter after an inspiring performance by Lord Larry's charges.  Somma was stunning when he came on, not just because he got two goals, but his every touch oozed confidence, awareness and skill.  One swallow doesn't make a Somma...............but it was a bloody good start and will leave some welcome selection headaches for Lord Larry for the next two games.  Somma wasn't the only star performer today Howson, Kilkenny Watt and Becchio will all go home pleased with their efforts and Big Kasper again showed why he's such a good keeper with two terrific one on one saves even if one of them was offside.  But Lloyd Sam was the man of the match for me with another stellar showing as he ran riot with the Millwall defence.  3 goals in 3 games for him now.  I think he likes it at Elland Road.  The defence also looked the part today despite Naylor's howler.
All in a all a good day that just goes to show that "in the summertime when the weather is fine" anything's possible. Sorry!
Leicester in the League Cup on Tuesday followed by Watford away next Saturday.  Already looking forward to it.
Can't wait.
MOT

Posted by Andrew Butterwick at 17:40

Thanks for the match day report MOT, a good way to keep in touch with, not only the scores, but the whole match day experience.

Loved Leeds from a distance for over 35 years. I'd get to more games, but, from northern NSW it's long way to travel, even for a home game, so reports like yours and the 606 boards help me stay in touch. Been to ER a couple of times over the years and hope to get back one day.

Keep up the good reports, I'll keep a look out for them each week.

Say G'day to Chocker and the Quiet One for me and enjoy another Carlsberg, my shout. (I'll have a Theakstons please)

Ozzie Leeds,
Thanks for the feedback. It does make it all worth while when a long distance fan makes such comments. There are quite a number of readers in Oz at the moment.
Theakstons is a good weapon of choice and I wish they sold it at ER.
I will pass on your "G'Day" to HC and the Quiet One.
MOT