I don't know about you but it seems ages since our last game against the tractor boys of Ipswich?  Last weekend's international break meant I had to think before answering the inevitable question "What are you doing this weekend". Not so this week as I eagerly responded to the same question "We're at Boro and before you ask of course I'm going"  Middlesbrough away is not the most glamorous of games though.  Middlesbrough as a town or a football club would never win a beauty contest.............they are what's best described as functional.  Although they started the season as one of the favourites for promotion they have spluttered and stuttered under the leadership of Mr Strachan and currently languish in 18th position.  This less than auspicious start has made the locals restless and after their last game where they gave up a two goal lead to draw with Portsmouth the pressure is beginning to tell on ex Leeds hero, Strachan.  After the game he gave what can only be described as a "frustrated" interview to the poor reporter who had the impossible task of asking the feisty Scot for his reaction to the abysmal defending and capitulation to a poor Portsmouth team. Strachan's post match interview...cringe worthy! 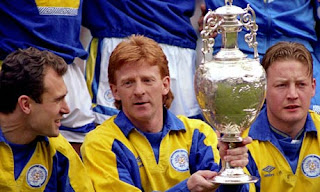 So the focus of the media and the locals will be very much on the home team and their performance and a Leeds victory in the Saturday night televised game could well see Gordon voted off by the judges in Teeside's own version of X-Factor............We're Crap-factor!

Not that Leeds' magnificent away support will travel with anything but cautious hope after their team's varied performances away from the Theatre of Hope.  Yes we have secured 3 points at Watford and come back with worthy points from Forest and Donny but into that mix add the horror show at Oakwell and the disappointing loss at Portman Road and the nerves will be jangling as the classified results finish on Saturday evening and our game kicks off.  Lord Larry has moved to secure the well travelled Tony Warner to cover the sudden lack of goalies and with promising returns to the playing field for Paynter and Parker this week and Bromby, Sam, McCormack, Aidey White and Bessone all training again things are looking up on the injury front. The out of favour Mike Grella has finally gone out on loan to Carlisle.  Many at ER will wish him well.

So is the Boro game a Yorkshire derby?  To anyone over the age of 45 Middlesbrough is in Yorkshire and not the made up county of Teeside so the answer is definitely yes..........a fact lost on Boro defender Matthew Bates who said in the local press it was just another game and not a derby.  Me thinks he might be in for a shock as the inevitable sold out away end cranks up the atmosphere with over 4000 mighty whites fans showing the dwindling Boro fans how to make some noise. The pressure is on the home manager but as Lord Larry takes charge of his 100th Leeds game expectations are as high as ever amongst the Leeds hordes. A cracking game in prospect with a Somma inspired Leeds win by 3:1 is my prediction. Seat belts fastened though..............Leeds don't do easy!
Can't wait.
MOT
Posted by Andrew Butterwick at 09:05

Yes it is a Yorkshire derby,as the old saying goes, You can take the man out of Yorkshire but can't the Yorkshire out of the man. Same applies for Teeside, Teesiders are Yorkshire men with funny accents ;)