Saturday afternoon at 3pm saw the Happy Chocker, the Quiet One and yours truly heading up the A1 for our tea time kick off with struggling Boro. A 5.20pm Saturday evening kick off just doesn't seem right to me.  That's the time normal people would be watching Dr Who or Jim'll fix it in days gone by not travelling to watch their favourite team play.  I suppose that's the price we pay for still being one of the TV producers favourite teams.  Who said we're not famous any more?

Once we were installed inside Dr Browns pub for the usual pre match refreshments the atmosphere lifted significantly as the boisterous away fans took advantage of the longer than usual drinking time. The pub had some dubious live feed of the Premier games on the big screen so we were able to witness Mr Van der Saar's howler that gifted West Brom an equaliser at the Theatre of Shite.  The noise in the pub couldn't have been louder if Leeds had scored.  A mixture of confidence and nervous apprehension is the best way to describe our pre match thoughts.  After all we had lost our last two matches although there were signs at Ipswich that we can play..................if we can just tighten up the famously creaky backline. Leaving the pub and heading for the strangely familiar Riverside Stadium the sights and smells of a matchday crowd attacked my senses as wafts of burgers, onions, cigarettes and beer competed with the fresh north east air for priority in my nostrils. 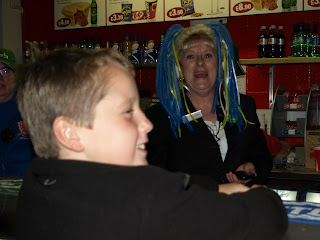 Once inside the ground I realised why the Riverside seemed so familiar.  It's a B&Q flat pack stadium, just like Derby, Southampton, Leicester, Coventry et al.  The narrow causeway beneath the away end was soon rocking to the rhythm of WACCOE as a combination of extending drinking and the normal cacophony of Leeds fans combined to crank up the atmosphere to fever pitch.  I can understand why Zulu warriors used to drum up a similar beat with their spears on their shields before attacking Michael Caine and his stoic pals at Rourkes Drift.

On the pitch Becchio returned to the starting line up along with Connolly whilst Jason Brown started in goals. New loanee Ben Alnwick was on the bench after the reported capture of Tony Warner proved to be premature.  Leeds were out of the traps quickly and were soon zipping the ball about on the perfect playing surface.  Howson and Faye established an early authority in midfield and just after 10 minutes the sultry Somma sent the 4,500 Leeds fans into raptures as he expertly finished a cross from Watt after neat build up play.  1:0 Leeds.  Things were looking good. Boro  were trying to play the ball on the deck but showed all the signs of a team under pressure as the home fans started to get on their backs. Leeds' pressing style restricted them to long range shots which Jason Brown dealt with confidently in the Leeds goal.  The flying Pig is looking a good acquisition.

On half an hour things started to go a bit pear shaped for Leeds.  First McCartney went off feeling ill soon to be followed by Sanchez Watt who was hacked down by a crude challenge in  midfield.  I suppose it was some sort of back handed compliment as Mr Watt had bamboozled the home midfield with his silky skills in the first 30 minutes.  Leeds re-grouped and were certainly the more eager of the two teams as the half drew to a close.  Kris Boyd nearly pulled one back for the Smoggies but fluffed his lines as his header crept past the post.  The half time whistle was met with well deserved applause from the Leeds end and less than generous advice from the other.  The natives were restless.  Our half time debate was positive.  Leeds had played well as a unit with Faye strolling around in the middle............The Sherburn whites description of him as a box to box player within the centre circle was a tad harsh...........Howson playing the holding role well and Somma and Becchio causing trouble up front.  The tea time viewing had been good. 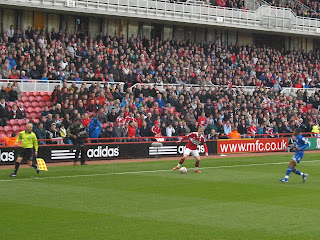 Gordon Strachan had showed all the signs of a man under stress in the lead up to the game.  His team's first half performance wouldn't have helped relieve any of that stress so I suspect his half time pep talk was of the more animated type............whatever he said worked though as Boro suddenly looked as if they could make life difficult for Leeds.  The extra spring in their step won them tackles and possession and it was Leeds who were back pedalling.  Our first half confidence was disappearing fast as all the action was at the other end of the pitch in Mr Brown's area. Sure enough the famous seat belt was soon needed as Kris Boyd equalised after a teasing cross into the heart of the Leeds box was bundled home.  Game on.  The whinging changed to cheering in the home stands and we suddenly had a game on our hands. Surely we weren't going to succumb to the Smoggies after being in control of the game.  The floodlights were shining bright...........the red shirted home team were attacking on all sides............the home crowd were baying for blood..........for one nanosecond I thought this was Barnsley all over again!  Then came the turning point in my eyes as Somma worked some space down the right channel and fired an enticing cross towards Becchio only for the home defence to scramble it away.  That one move was a double whammy for Boro as it reignited Leeds fire and also dampened some of Boro's new found spirit. Roared on by the loyal whites fans Leeds went for the jugular.  Becchio, having his best game in a Leeds shirt, harried and hustled the red defenders and his industry paid dividends.  He relieved a careless Boro defender of the ball and released Johnson  who pulled a cross back from the bye line.  What happened next was pure poetry.  Through the tangle of bodies in the box I could just see the Argentinian wrap his trusty left foot  round the ball as he hit the sweetest volley I've seen for a long time.  The ball arrowed into the bottom corner of the net like an exocet missile.  Get in you absolute beauty!!!!!!!!!!!!!!!!!!! 2.1 Leeds. 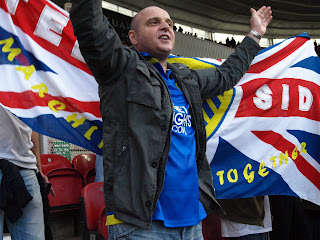 When he nearly added a third with an intelligent curling right foot shot minutes later the Leeds fans were in awe.  His anthem was belting out from the South Stand.  Even Mr Berbatov must have been impressed!
Belatedly Boro pushed forward looking for an unlikely equaliser and but for a couple of nervy corners Leeds played the clock down for a well deserved victory.  Gordon Strachan is not the most popular man on Teeside and I don't suppose the adulation heaped on him from the Leeds fans helped.
For me this was the most complete performance of the season.  The defence was a lot more robust tonight, still work in progress though, the midfield looked solid with Faye adding some well needed organisation and up front Somma and Becchio are forming an encouraging partnership. After some of the dire referee performances of recent weeks Mr Foy deserves a mention for an excellent match.  Not many ref's would have allowed play to continue in the lead up to Leeds first goal and he didn't brandish a card all night.  Well done.  Winning away is always nice and this was no exception.  By the sound of the vitriol coming from Boro fan's mouths as we walked back to the car Strachan's days are definitely numbered.

So a pleasing trip home safe in the knowledge that 3 precious points had been deposited in our possible play off bank account.  What the difference a win makes.
Leicester up next on Tuesday.  If I were you I'd leave those seat belts fastened for now though!
Can't wait.
MOT

Posted by Andrew Butterwick at 23:37