Bye bye Gordon, a bulging treatment room and another 3 points? 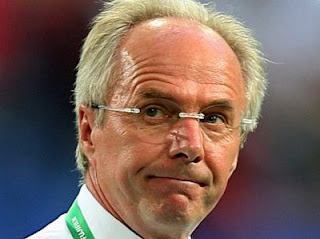 Not many people will be surprised by the news that Gordon Strachan has parted company with Boro today. Their defeat to the mighty whites was the final straw for the wee Scotsman who never really appeared to win over the fans after the departure of the popular Gareth Southgate. But as the saying goes the one certainty in Football management is that you will end up getting sacked.  One person who has good experience of that is Sven Goran Eriksson who has an impressive tally of 14 clubs where he has plied his lucrative managerial "skills"  His latest team, Leicester City, arrive at the Theatre of Hope on Tuesday night looking to turn round their stuttering start to the season.  Sven has always intrigued me.  For a start he looks more like a dentist than a football manager. His pitchside manner resembles that of a polite relative at a funeral and his TV interviews show all the passion and enthusiasm of a condemned man going to the gallows...............and yet he still keeps getting well paid manager's jobs? His CV does include winning Serie A with Lazio and 3 times champions of Portugal with Benfica though so the guy does have some talent................I just doubt that his "style" will ever bring him success in the more robust English game.  Time will tell?

The contrast with Lord Larry couldn't be greater as the two go head to head in the latest of Leeds' championship adventure.  Injuries have yet again interfered with Larry's match preparations as Faye, Watt and McCartney were all on the Monday treatment table instead of the training ground  We do seem to have more than our fair share of injuries of late.  It's almost as if we've upset the god of ailments.......especially at left back.  Anyone who plays for more than 45 minutes in the troublesome position is destined to head straight to the treatment room, a la Parker, Bessone, McCartney and those who don't get injured just seem to lose their supposed form in the "Left back Bermuda triangle" such as Mr Capaldi. So it's likely the dependable and willing Andy Hughes will fill in the cursed position against the Foxes unless McCartney recovers from his virus. Injuries or no injuries we will have to defend better through the midfield than we did when Leicester visited ER earlier in the season if we are to take the three points.  Howard and Wellens made hay in the 2nd half of that match as our midfield went missing. If we can put that right and carry on with the positive mood from Saturday evening we might even be back in the play off positions come the end of the night?  Mmmm that rather depends on which version of our creaky defence turns up me thinks. Hopefully Bruce will come straight back in to replace Naylor as I think Bruce and Collins is the best centre back pairing we have.  Again time will tell.

So another dash from work for a Tuesday night match.  The last two Tuesday night matches have been against PNE and Barnsley.  Surely the Leicester game can't be as eventful as those two can it?  I'm hedging my bets and going for a safe prediction of a Leeds win.................8.6! Seat belts fastened here we go again.
Can't wait.
MOT
Posted by Andrew Butterwick at 21:32