It was a severely hungover Happy Chocker who picked me up ready for our 2nd festive game in 3 days.  The grey miserable weather that had descended on West Yorkshire failed to dampen our spirits though as we anticipated stretching our 10 game unbeaten run at the expense of a Pompey side who last season were playing with the big boys in the Premier League.  Such is the new found confidence buzzing around LS11 that even a fixture against a strong Pompey side is seen as an excellent opportunity to deposit 3 more points in the promotion vault. Pre match refreshments were taken in the Centenary Pavilion with the assembled Twitterwhites including the fanatical Seona who was over from Snowy Switzerland to see the mighty whites in action.

The team news raised many an eyebrow amongst the gathered Leeds fans.  Becchio and Killa on the bench with McCormack and Paynter starting up front in a 4.4.2 formation. Now I am a big fan of McCormack and Paynter for that matter so I wasn't too concerned with their selection but moving away from the 4.5.1 style that has served us so well since the Cardiff defeat?  I wasn't so sure. Still "in Grayson we trust" is our mantra so we took our seats with another prediction of a 3.1 win to the form team Leeds. 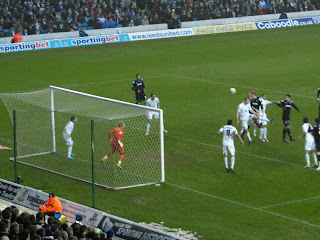 Over 31,000 had packed into the Theatre of Hope and the vast majority were there to see a Leeds win.  After throwing away a two goal lead in the last match what we needed was a good start to re-establish our confidence.  And that's exactly what we got.  McCormack sprayed the ball wide where Snoddy swung the ball into the box.................Paynter bustled the defender out of the way but didn't connect properly with the ball....................but Mad Max made no mistake in tucking away the bouncing ball into the net.  1.0 Leeds and we'd only just had time to settle into our seats.  And before I'd had time to say "Elland Road is certainly the place for goals this season" we were 2 up as Capt Fantastic, Jonny Howson, danced his way through the flailing Pompey defence and finished with the coolness of a seasoned striker. Get in! 2 nil up in 10 minutes.  Surely we won't throw this lead away?  That thought was strengthened as Paynter so nearly finished off a scintillating move involving Snoddy and McCormack. Things were looking good , very good.

At the other end Pompey did look dangerous though and when McCormack cleared a header off the line my worry beads started rattling. They then began to vibrate loudly as Kitson started to win too many headers for my liking.  As one header floated just past the post I glanced at HC and his face confirmed my view that this might not be as comfortable ride as the first 10 minutes suggested.  Looking on the positive side we did look good when ever we went forward with Snoddy once again strutting his silky skills on the right flank.  Carl Dickinson, once on loan at Leeds, was the unfortunate left back who was being tortured this week.  As the half hour mark came it was clear that this game still had lot's of goals left in it..........unfortunately the next one was in Kasper's net.  In a move that bore remarkable similarities with the one that led to Rob Hulse's goal for Derby on the first day of the season David Nugent found enough space to fire an unstoppable shot into the top corner of the goal. 2.1 and a rather sickly feeling began to churn in my stomach.  Surely we can't lose another 2 goal lead?

Leeds continued to push forward with Snoddy and McCormack looking dangerous.  Half time came with the score at 2.1.  I rushed with anticipation for the HT gent's debate with the Urinal philosophers. Surprisingly the debate was more of a gentle murmur with no dissenting voices over the team selection and the general view summed up by one scholar "we should score more goals against this lot.........just hope we don't give any more silly goals away"   Mmmm yes! 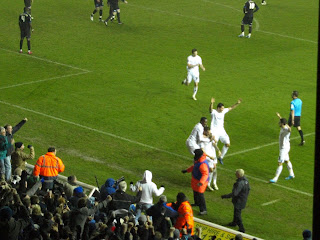 There was a tenseness to the opening salvos of the 2nd half which spread to the crowd and contributed to a slightly muted atmosphere inside Elland Road.  Pompey had 5 in their midfield and they seemed to have an extra man when they broke from defence.  This was turning into one of those matches that fans with heart problems, high blood pressure or those of a nervous disposition should not attend as Leeds continued to play in a very open attacking style as they looked for the saviour of a third goal.  Just after the hour that 3rd goal came as the ball dropped invitingly into the path of Bradders from a corner and he smacked it home with glee as the Kop erupted with a mixture of relief and joy.  3.1 Leeds.  Surely we won't throw this lead away?  I started to explain to the fan next to me that a team is always at it's most vulnerable when they've just scored but I never finished the sentence as I was proved spookily correct when a speculative shot took a horrific deflection off of Andy O'Brien and into the Leeds net. 3.2 Leeds.  The silence around me was broken with mentions of Preston and Leicester.  Surely we couldn't lose this lead? I broke out into a cold sweat.  HC was wearing the look of a condemned man.  My stomach was in a triple reef knot and my throat was as dry as the Gobi desert. 27 minutes left to protect our now flimsy one goal lead.

Up to now I have resisted mentioning the man with the whistle but he must have had a shite Xmas.  Maybe his wife didn't like the present he got her?  Maybe his wife didn't like him and had disappeared into the blue yonder with a toyboy she'd met on the internet..........who knows but one thing is for certain and that is the Ref was hell bent on making up for his miserable festive period by pissing off everybody inside Elland Road with his weird decisions.  McCormack should have had a penalty and he had a goal disallowed for god knows what amongst a string of calls both he and his assistant got wildly wrong.  But we were still a goal up and hanging on...........and I mean hanging on.  Any composure we had had long disappeared as we switched to desperation football and "anywhere will do" defending.  Pompey fed off this lack of composure and poured forward looking for an unlikely equaliser. Becchio and Sam entered the fray but the tempo remained with Pompey.................then Snoddy found himself free on the half way and heading for goal..........go on finish them off you Scottish beauty................but the move fizzled out with a mis directed shot. There was a surreal sense of the inevitable about the proceedings as the board went up with 5 minutes added time to survive.  We managed 2.  The ball broke down the Pompey right were their sub found himself in acres of space..........he then crossed the ball into the box where O'Brien and Kasper, under no pressure from a Pompey player, conspired to ruin my day by diverting the ball into the net and gift Pompey the equaliser. I could hear Kammy saying "unbelievable Jeff" up in the TV gantry. I was gutted to say the least. Another two goal lead gifted to the opposition.  I know it's the season of goodwill but this is ridiculous!  The drama wasn't complete though as Leeds tried to snatch a late winner.  Becchio went to ground in the box after clashing with the Pompey centre half. PENALTY screamed 30,000 voices........Mr Knobhead Ref just waived play on.  At the other end we had to endure a couple of long throws into the box that had me thinking the unthinkable......the ghost of Preston!  Thankfully the whistle went and we had to be satisfied with a draw.

The walk to the car couldn't have been more silent if I'd been accompanied by a host of Trappist monks on a vow of silence as the seething of disappointment oozed out of my pores.  4 points in 2 games thrown away and as if to rub it in Cardiff lost so we could have been back in 2nd place.  Instead we are back in 4th.  Still unbeaten though............the only crumb of comfort from another draw snatched from the jaws of victory.

On reflection I don't think the formation change worked.  Howson isn't as effective in the deeper role and we definitely lost out to their 5 man midfield in the 2nd half.  With Killa away on international duty for a month I think Lord Larry will need to rethink this one.  Both Snoddy and Mad Max had good games along with McCormack but the abiding memory of this match will be the way the team wilted collectively as Pompey strove for the equaliser. Not a pretty sight

Middlesboro up next on New Year's day.  Anyone predicting 0.0?  I don't think so! Fasten your seatbelts.  Put on your oxygen mask and enjoy the ride.
Can't wait.
MOT

Posted by Andrew Butterwick at 21:05