It's not so many years ago that one of the traditions of Boxing Day was a spot of Fox hunting. So the prospect of seeing the mighty whites hunt down the Foxes at the Walkers Stadium on this Boxing day was one that both the Happy Chocker and myself found appealing.  Not wanting to spoil a good tradition we pointed the car south for the trip down the M1 in search of a bit of Fox blood.  Now I know the subject of fox hunting is the sort of topic that polarises opinion amongst the populous but there are some members of the anti hunting brigade in cyberspace who really need to either get a life or learn to read tweets properly as my rallying cry mentioning Fox hunting, Leicester, mighty whites drew some vitriolic responses.  Apparently I am a white supremacist, animal hating toff who organises illegal hunts!  Ah well.

Any way back in the real world we were contemplating Leeds' chance of extending their impressive 9 match unbeaten run at the hands of a Leicester team who have really impressed on both their visits to the Theatre of Hope this season.  "Steve Howard always seems to score against us" I nervously opined to HC as we got out of the car and ventured into the arctic like conditions at the Walkers Stadium.  If Beefy was with us instead of cheering England on in the slightly warmer climes of Melbourne he would have classified this weather as at least triple Baltic.  It was absolutely bitter. Pre match refreshments were restricted to a couple of cans which were that cold they seemed to immediately freeze themselves to the exposed skin of our hands. 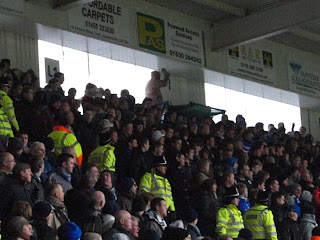 The common view amongst the eclectic mix of Leeds fans gathered in the concourse of the yet another B&Q flat pack stadium was we would be happy with a point. Jo and Mark from twitterland helped decipher the possibilities for the mighty whites.  Andy O'Brien was back in the team and Alex Bruce had dropped to the bench, presumably to allow Collins to go head to head with Howard. So after a sensible debate came down firmly on the side of a draw the HC and my good self backed a 2.0 and a 3.1 win respectively for Leeds.  Football is never logical.

Inside a packed stadium the Leeds fans were, as ever, in good voice especially when Leicester's bare chested, roly poly drummer made his presence known.  An inevitable chant of "you fat bastard"  got a cheerful response from the home team's lead drummer as he danced about showing off his more than ample torso.  His rolls of fat rippled up and down his body like a Tsunami swamping a large Pacific atoll!  The game kicked off and it was the hosts who had the better of the first 15 minutes of a scrappy opening.  Richie Wellens and Andy King were to the fore as they tested the Leeds back four with probing balls and intelligent runs. The 3,300 Leeds fans urged their team on as they tried to get a foothold in the game.  The potent wing double of Snoddy and Mad Max looked the most likely for the mighty whites as they tried to draw breath and settle into their now trademark passing game.  The ex Leicester man Gradel attracted a hostile reaction from his former fans when ever he touched the ball............"Leicester reject, Leicester reject" whispered the quiet home crowd. 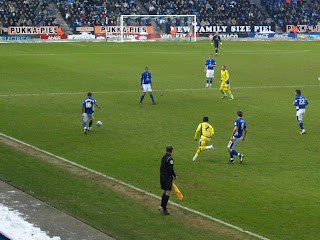 For any neutrals in the 30,000 crowd this wasn't easy on the eye as both teams cancelled each other out with a high tempo pressing game that strangled any potential flowing football at source. The game came to life on 20 minutes though as Leeds fashioned a passing move on the right and when the ball was swung invitingly into the Leicester box it was the unlikely figure of Mad Max who beat the powder puff home defence to bury a header into the net that "our Argie" would have been proud of...............get innnnnnnnnn! 1.0 Leeds, against the run of play but 1.0 Leeds.  The Leeds hordes celebrated in style as the rotund drummer fell silent.  "Leicester reject, Leicester reject" the Leeds fans bellowed in rich irony followed by a a raucous "you're not drumming any more"  Football's brilliant when your winning!

The game continued on the lower end of the entertainment scale not that the Leeds fans noticed or cared.  We were a goal up against a team that had given us a football lesson at Elland Road and despite the bone chilling cold we were enjoying the Fox hunt.  Our nemesis, Steve Howard, was trying his best to upset us though as he threatened to terrorise our defence.  Collins was defending as if his life depending on it and Kasper was punching, catching and turning away anything that came near him. Leeds were the happier team as the first half whistle brought to an end a "tight" 45 minutes. 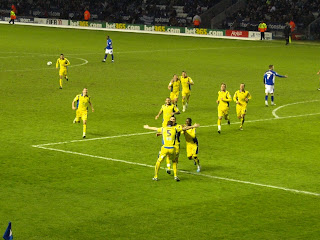 Leeds started the 2nd half with a spring in their step.   Maybe they could smell the blood of the Fox knowing that another goal could finally snare their prey.  Mr Drummer, still shirtless, tried to inspire his fans into song but every time he struck up his drum it was the away fans who took the beat and out sung their rivals none more so than when "Radebe, Radebe" thundered around the Walkers stadium.  Leeds were now attacking the away end as Snoddy once again tormented an opposition defence with his jinking direct style. Leeds were starting to get the upper hand as they gradually turned the screw and it wasn't long before Mr Drummer was silenced once more.  Snoddy swung a corner deep to the back post.............the beanpole like Collins won the ball and headed the ball back across the box to where Snoddy raced in and hit a shot that screamed like an Exocet missile into the back of the net.....................2.0 Leeds and Boxing day suddenly became a whole lot better.  Leeds now took control and with the scent of blood in their nostrils went for the kill.  Snoddy weaved his magic again and set up Becchio who so nearly turned his man and got his shot away.  Killa emerged from the pack and hit a shot goalwards as Leeds exploited the open spaces Leicester were leaving as they went in search of an equaliser. "Where's your drummer gone" was followed by a cruel chant of "He's f***** off home and ate the drum" Not for the first, or last, time this season an away ground reverberated to the sound of celebrating Leeds fans.

As it happened a tad premature. Sven shuffled his pack and Roman Bednar replaced Mr Howard.  He immediately started to cause the Leeds defence problems with his better mobility and running. Leeds were looking as if they would close the game out in style though as the confident swagger crept back into their game.  Suddenly I had stopped feeling the cold as the prospect of another away win warmed my inner thoughts.  Then the Foxes were given a lifeline.  Snoddy was bundled to the ground from behind on the half way line.  Leeds stopped momentarily expecting a free kick which didn't come and Dyer sprinted away towards Schmeichel with the ball....................Schmeichel spread his large frame as Dyer pushed the ball wide and took the fall to give the home side a penalty.  The expected red card was only a yellow as the ref judged that Dyer had pushed the ball too far to warrant the red.  Gallagher smashed in the penalty and it was game on. Mr Drummer awoke from hibernation and Leicester suddenly upped the tempo. Suddenly I didn't feel so good as the blues used the adrenalin rush from the goal to push onto Leeds and threaten an equaliser that 10 minutes ago had seemed as unlikely as Katie Price becoming a Nun and taking a vow of silence.

Whilst the first goal was dubious in the build up there could be no arguments about Leicester's 2nd as Andy Kings picked up the ball 25 yards out and hit an unstoppable volley past Kasper. Bollox!  The silence amongst the Leeds fans was deafening.  Mr Drummer was dancing and drumming, having regurgitated his instrument and it was suddenly very cold again.  Billy Paynter and McCormack came onto try rescue the three points that appeared to be in our grasp.  A tense last ten minutes spawned chances at both ends but to no avail though how the linesman and referee conspired not to give a penalty to Leeds in the last minute of added time is beyond me.  Paynter's cross was clearly handled by a Leicester defender's raised hands.  Which bit of the handball rule did the ref not understand?

The ref's whistle brought to an end a see saw game that sent both sets of fans home thinking they should have got more than the one point.  In the end we would have been happy with a point at the start of the game but why did this feel a touch like a defeat? A draw snatched from the jaws of victory.  Snoddy was my man of the match topped off with his searing volley fro the 2nd goal.

The car heater was welcome as the Happy Chocker and I  tried to thaw out on the way back up the M1.  I was re-united with the feeling in my toes as we passed Woodhall services.  In the end the Fox escaped the grasp of the nasty white supremacists.  Shame really I was looking forward to informing cyberspace that we had had a successful day Fox hunting and the vermin had been caught.

Portsmouth next up at Elland Road on this hectic holiday programme another tough game and another massive crowd, swelled by a contingent of the faithful Swiss supporters branch.  Can we extend the unbeaten run to 11.  I'll try and get word from the Angel of the unbeaten run!
Can't wait.
MOT

Posted by Andrew Butterwick at 10:28