The weather was grey and foreboding as we pointed the car southwards for the long trip to Cardiff.  It was somehow appropriate for what was always going to be a difficult game against fellow promotion hopefuls, Cardiff City.  Justin and Eddie joined the Happy Chocker and I as we ate up the miles heading for the pre arranged rendezvous to pick up the match tickets at Cardiff West services. Disorganised chaos reigned at the Services as three Cardiff stewards eventually turned up with the 1900 tickets to dish out to the eager Leeds fans now swamping the motorway stop off area.  I don't know what the assembled overnight truck drivers made of the scene as we all queued to liberate our tickets out of the side of a transit van and then scuttled away as if we 'd just been given Willy Wonka's golden ticket! 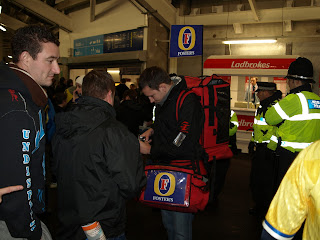 Cardiff's new stadium is one of the better B&Q flat pack arenas.  Inside the spacious concourse we were surprised to find beer on sale dispensed by "Thirstbuster" operatives straight from the set of Ghostbusters.  Justin was soon bezzie mates with one of the dispensers as he returned half a dozen times in 30 minutes to marvel at the contraption and relieve him of some of the weight he was carrying on his back.  He's such a thoughtful guy Justin.

The team news was as surprising as the sale of alcohol in the ground.  Becchio was on the bench with Paynter and McCormack retaining their positions up front.  Ben Parker secured the problematic left back shirt in the absence of McCartney. Predictions from our motley crew suggested a draw but I plumped for a 2.1 triumph to ease some of the pain of the humiliating defeat back in October.  Rain teemed from the slate grey skies as the game got underway.  The stadium was packed and the atmosphere electric with the 1900 Leeds fans ramping up the decibel levels as usual. 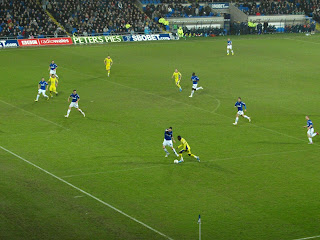 Leeds made a worryingly sluggish start.  Cardiff's form had dipped alarmingly of late but there was no sign of that as their neat passing triangles targeted the same full back positions where they had had so much joy at Elland Road. Jay Bothroyd had thankfully not made the team but Bellamy, Chopra, Whittingham and Keogh posed enough of a threat and they soon settled into an ominous smooth rhythm. The first 10 minutes of the game were played out in the Leeds half punctuated by a brief Leeds sortie that resulted in a wayward shot from Snoddy.  This is a long way to come to get completely mullered I mused.  Just as those thoughts were attacking the pessimistic side of my brain my fears became a reality as Cardiff took the lead.  Bellamy played a ridiculously simple one two and strolled past Connolly before steadying himself and planting the ball past a helpless Kasper. 1.0 Cardiff and the home fans erupt in unbridled joy at taking the lead against the hated Leeds.  I'll be honest I thought the floodgates were going to spring wide open as Leeds struggled to get any sort of grip on the game.  McCormack spurned a chance from a promising free kick but at the other end Kasper was kept busy with a series of stinging shots as the Leeds defence creaked. Cardiff had what seemed like 97 successive corners as I questioned the sanity of making the 490 mile round trip to see the mighty whites take another Welsh whipping.  Continuing our 12 match unbeaten run looked about as likely as the Australians winning the latest test by an innings and 300 runs.

Leeds fans are always vociferous and vocal in their support of their team and tonight was no exception but the continued baiting of Cardiff's manager over the unfounded and scurrilous accusations of child abuse were a step too far for me.  Eventually the Cardiff fans responded with the inevitable Istanbul chants and all of a sudden being a Football fan didn't feel that special.

How we got to half time just one goal adrift was due to a combination of desperate defending by Leeds, especially their mercurial goalie, and some less than confident finishing from the Bluebirds. The half time Bovril was drunk with a feeling of genuine fear for what was to come in the 2nd 45 minutes.  Justin went to find his bezzie mate to take some more weight off his back to try and numb the pain. Neil Kilkenny was on his way to Oz to join up with his international team mates.  How I wished he was in the cold, wet Welsh capital digging Leeds out of the hole they had sunk into. The Leeds midfield had been in the main over run although Bradders was battling manfully against the blue tide.  Jonny Howson just isn't the same player in the deeper position the 4.4.2 system dictates him to play.  Poor Ben Parker looked way off the pace having been rushed back into action earlier than I suspect Lord Larry would have liked. On the other side of the pitch Connolly had taken to verbal assault to halt Bellamy as the more normal approach of tackling and marking his man just wasn't working. 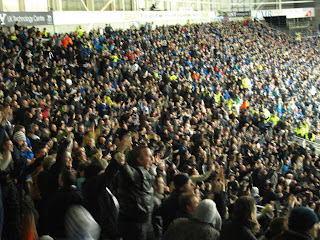 The 2nd half continued in a similar vein to the first with Kasper on high alert as his goal came under further bombardment.  Connolly continued his snarling and sniping at Bellamy by now helped by Snoddy, who likes a good snarl, but all to no avail as he still seemed to control the game at will down the Cardiff left flank.  We needed a change and quickly. Lord Larry left it until an hour had passed.  He then brought on Sammy Watt to replace the less than effective Mad Max and the disappointing McCormack.  The changes had an immediate impact as the fresh legs and enthusiasm hit Cardiff where it hurts............in mid field. Watt industriously won the ball on the half way and suddenly the pitch opened up for him............Sam hurtled down the inside left channel unmarked.............Watt laid a perfect pass so Sam didn't have to break stride............he jinked left then right and fired a goal bound shot.............the away fans gasped as the home goalie only just managed to palm the ball away to safety.  But Leeds weren't finished as they channeled the ball back to Snoddy who hit yet another spectacular curling shot into the Cardiff net. 1.1 and confidence surged back into the Leeds team as the 1900 die hards drunk in the unexpected equaliser.  All was not lost.

Suddenly Snoddy was causing havoc sparked by both Watt and Sam's positive contribution in the short time they had been on the pitch.  At last Leeds had some momentum.  Kasper, ever eager to keep the game flowing, gave the ballboy behind his goal some toilet discomfort as he gave him a Viking war face for not returning the ball quickly enough. The feel good factor didn't last long though as one half of the Sammy Watt double act disappeared back down the tunnel with an injury.  It was a short but effective 6 minutes of play from Lloyd Sam.  Becchio entered the fray as Leeds pushed for an unlikely winner.

Bradders set Paynter free but he couldn't get his shot away and then Bradders himself stretched the home goalie with a dipping volley.  Even Ben Parker found some energy from somewhere to go on a run that ended with a shot that the goalie saved with ease. Maybe he should have stayed back because minutes later an innocuous long ball down his channel found him treading water as the obnoxious Chopra left him for dead and planted a simple shot past Kasper. 2.1 Cardiff.  Why Mr Nobhead Chopra decided to celebrate like a demented chimp in front of the away fans will remain a mystery?

With 10 minutes remaining Leeds tried to salvage a point with another unlikely equaliser but it was Kasper who was called upon to keep the score respectable as he spread himself to block a last minute attempt from Keogh.  At the final whistle the Cardiff fans celebrated with glee as the Leeds fans reflected on a first defeat in 13 games. As we tried to get back to the M4 and the road home we also tried to look for the positives from the game.  Sam, Watt and Snoddy were mentioned in the conversation heavily with recognition of Kasper's contribution to restricting  Cardiff to just 2 goals.  We don't look as good playing the 4.4.2 system and Killa is going to be a big miss while he's away at the Asia Cup.  Hopefully we find a back up creative midfielder in the January window.  If not we may find ourselves settling into a top ten slot rather than a top four slot as the season progresses towards May.

The clock moved onto 2.51am as I reached home.  News that England were running riot in Oz soothed some of the pain of defeat but this hadn't been a good start to January, a month where we have "stuttered" in recent years.  I hope we are not about to keep that tradition going.  Next up is the trip to the Emirates.  No pressure for League points and no pressure from expectations of a victory.  Should be a good day out.  You never know we might just surprise the football pundits and reprise last years cup exploits and put yet another frown on  Mr Wenger's face.  Now that would be a beautiful sight!
Can't wait.
MOT

Posted by Andrew Butterwick at 11:22