I'm sure the powers that be in the South Wales constabulary think they have good reason for moving our clash with the Bluebirds to a Tuesday night.  If they thought it would reduce the number of mighty whites fans prepared to make the journey to Cardiff's new stadium they are wrong as the the full allocation of 1900 tickets sold out in the usual double quick time. I also suspect it will be more or less the same 1900 who would have gone yesterday afternoon. The restrictive arrangements for exchanging vouchers for tickets at Cardiff services would have the same effect whether the game was yesterday or this evening.  So I am left with the conclusion that the only reason for moving the fixture was to totally piss off myself and the army of away fans who have had to take extra time off from work to attend the top of the table clash...........either that or the South Wales Police funds are running low and they couldn't afford all the double time payments if the game was played on a bank holiday. 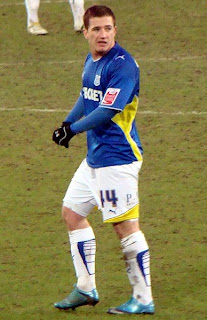 The match itself is an intriguing one.  After yesterday's results a win for either ourselves or Cardiff will move the victors into the 2nd automatic promotion spot after both Norwich and Swansea spurned a chance to put some clear water between themselves and the chasing pack. Whilst we can point to an impressive 12 match unbeaten run through November and December our Welsh friends have floundered during the same period mustering only two wins after looking unbeatable in the earlier part of the season. Our record against Cardiff in recent years is not good though.  We have failed to score in the last 4 meetings and memories of Cardiff's triumph against O'Leary's table topping European battlers 9 years ago are still raw in the minds of many of the Leeds faithful.  Add to that their signing of our Nemesis on "that" night against Preston, Mr Roly Poly Parkin, and our chances of making the unbeaten run a bakers dozen look bleak. Team selection and player availability will play a key part tonight though as Cardiff have doubts over both Parkin and Bothroyd whilst Leeds will be without Neil Kilkenny and possibly George McCartney, if he's not re-signed in time.  If Bothroyd has recovered enough to make the starting line up then the key to the game will undoubtedly be Leeds ability to keep him quiet, or not as the case might be. With Andy O'Brien back in the Leeds defence he will need to be at his inspiring best against the team he has allegedly turned down a lucrative move in favour of stopping at Elland Road.

So will the long and winding road lead to 3 points and revenge for our October mauling? Can we keep a clean sheet against one of the best attacks in the division?  Will we revert to the 4.5.1 formation?  If so who will play the Kilkenny role? Will we actually get there in time to see the game?  As ever there are more questions than answers leading up to kick off.  By 10pm this evening we will know. As for a prediction..........this one's too close to call. A 4th draw on the bounce for the mighty whites would make the long trip worth while. I fancy McCormack to score against his former employers.  As ever with Leeds though expect the unexpected........................
Can't wait.
MOT
Posted by Andrew Butterwick at 09:21