New Year's day tends to be a quiet affair as the excesses of the previous evening's celebrations catch up with the vast majority of the populous.  It was therefore not surprising that the journey to the Theatre of Hope for the Happy Chocker, the Quiet One and yours truly was a subdued one.  After all mixing a night out that finishes at 5am and a game with a lunchtime kick off is highly unlikely to generate a massive amount of pre match buzz is it? Judging by the walk down Elland Road to the members bar though HC and I weren't the only ones with a "delicate" disposition as a 30,000 crowd tip toed in almost silence to the game.

Once inside the members bar and fortified by a generous helping of pie and peas washed down with a pint we were ready for the game.  News that Andy O'Brien had signed a 2 and half year deal with the mighty whites was greeted with general approval from the gathered Leeds aficionado's. Lord Larry's selection of Hughes at full back to cover for the departed McCartney, whilst not unexpected, didn't send a surge of confidence through this fans veins.  I believe McCartney will be signed up ready for the trip to Cardiff though.  McCormack kept his place in a 4.4.2 formation with Becchio returning up front. Predictions of the outcome were all positive as you'd expect for a team on an 11 match unbeaten run playing a team still trying to escape the clutches of the dreaded relegation dog fight. My gut feel was for a 3.1 triumph.  Still not quite sure we can keep a clean sheet though.

The game kicked off with the visiting fans in good voice.  They had clearly had more time to wake up than the subdued home fans.  The first 15 minutes didn't exactly get the adrenaline pumping.  Boro were content to sit back and let Leeds come onto them looking for quick counter attacks to upset the Leeds back four.  With Kilkenny sat watching on the bench it was left to Howson and Bradders to provide the creativity from midfield but they both seemed to have left their creative heads in the dressing room as the Leeds attack stuttered and spluttered.  On the flanks Snoddy was singled out for special treatment as Boro had two and sometimes three defenders cramping his style each time he got the ball.  But it was the mercurial Scot who was first to wake the Leeds fans from their stupor when he volleyed over after a neat passing move with McCormack. Leeds weren't knitting together the fluid inter passing that has become their trademark on this unbeaten run though.  Had they all been out celebrating? Was the "hectic" festive schedule catching up with them? Or were they just missing the distributive creativity of a certain Neil Kilkenny? 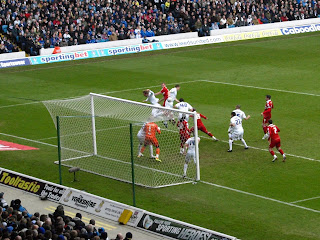 As much as Leeds were looking out of sorts Boro were far more confident than when we played them at the Riverside as they attacked with purpose and the giant Wheater mopped up anything entering his air space at the back. Things were not going to plan.  My fears were justified on 20 minutes as Boro took the lead from a corner as Wheater guided the ball into the Leeds net in front of the silent kop. 1.0 Boro. More than a few Leeds heads went down for the next 10 minutes as the home side toiled to make any impression on Tony Mowbray's charges.  The year was less than 14 hours old and it was already a frustrating new year rather than a happy one for me.  The momentum was with the away team as they took control of the precious midfield area with ease leaving Howson and Johnson chasing shadows.  When we did get the ball there was no zip or purpose in the passing.  Leeds were stuck in second gear as the game approached half time. Then Leeds got a free kick in a promising position just outside the box.  Howson, Snoddy and Bradders conspired in deep discussion before concocting a set routine that saw the ball sail harmlessly into the back row of the South Stand.  Sort of summed up the first 45 minutes.  At least it will add spice to the Gents debate I thought as I scuttled to relieve myself of the pre match refreshments. "Clueless from back to front" one fan offered referring to the team in 4th position and on an 11 match unbeaten run. "The midfield's rubbish" suggested another whilst another of the urinal philosophers was berating Capt Birdseye and Lord Larry for letting McCartney go.  I tried to explain to him that his loan had expired and he is expected to re-sign for Leeds before the Cardiff game. He still turned a shade of purple as he vented his rage at the porcelain bowl in front of him. Understandably the mood was not good after a poor first half but some fans do have a very selective and short term memory. 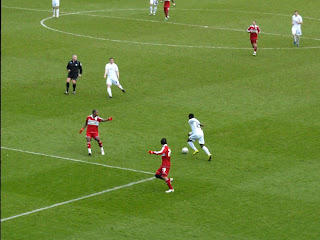 Leeds were now attacking the kop end.  Surely they could build up a head of steam and get back in the game?  Well no not really.  10 minutes into the half Kilkenny came on for Hughes with Bradders dropping into the full back role. Lloyd Sam replaced an ineffective Mad Max.  I think Max had been out partying with Snoddy all night as neither had played well up to now.  Becchio and McCormack were battling away up front but to no avail as Wheater continued to rule the roost like a giant pale totem pole.  Killa's influence was immediately apparent as the ball now moved through the midfield rather than over it as he tried to ignite a Leeds fightback.  Sam was having more joy on the flanks as a flicker of hope sparked the Leeds fans into life.  McCormack went near with a free kick but Boro continued to break dangerously none more so than when Bennett danced his way through the home defence only to fire his shot over the bar.  Sanchez Watt came on for Snoddy as Leeds changed into 3rd gear and went for bust sending Collins forward to bolster the attack.  Although the Boro defence was holding firm there were the first signs of cracks in the red defensive wall.  A speculative ball into the box from Killa was completely missed by the goalie and bounced of Watt for a goal kick.  Maybe there was hope yet as the game entered the final 10 minutes. Watt then tested the goalie with a close range shot that he stretched agonisingly to stop.  Leeds had the momentum but did they have the time.  The clocked ticked onto 90 minutes. 5 minutes added time went up.  C'mon Leeds one last push. 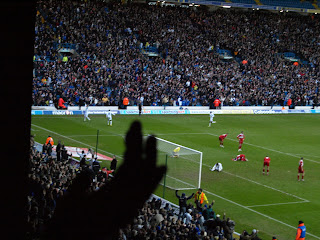 Becchio had had a quiet game by his standards.  Wheater had controlled Becchio's usual weapon of choice, the air, and in doing so nullifying Leeds' main goal threat.  But Becchio never gives up.  So when Capt Fantastic, Jonny Howson, surged away with the ball from an attack that Boro really should have sealed the game Luciano once again made a run looking for the ball.  This time he had an ally in Neil Collins lurking with intent on the edge of the box. Howson's desperate long ball was heading for Mr Wheater but this time Collins won the ball and nodded it into the box where McCormack was waiting to pounce................the Boro goalie lunged forward to dispossess McCormack only to punch the ball to Becchio...............the ball bounced up as Luciano took aim............and then he smacked a sweet volley into the open net and broke the hearts of the Boro team and their noisy fans.....................get in you beauty!!!!!!!!!!!!!! 1.1 and Leeds had just escaped from jail.  91 minutes on the clock and the unbeaten run looked safe.

But there was still drama to come.  The Leeds team dragged their weary legs forward one last time buoyed by the adrenaline boost from the equaliser.  The ball found its way to Watt on the right.  He battled and won the ball and then found space to cross....................the cross was perfect and out of the pack of defenders emerged McCormack and Collins eager to head an unlikely winner.................the ball seemed to come in slow motion, I glanced at the linesman and his flag was down................McCormack arched his back and headed the ball past the goalie but agonisingly past the post.  How the fuck did he miss?  I looked at HC in disbelief.  In the space of 3 minutes Leeds had managed to turn round a game we were deservedly losing into one we should have won.  At least the "never say die" spirit hadn't suffered from the festive blues.

The final whistle blew to end a game that was frustrating for the most part with an exciting finale. The unbeaten run extends to 12 with the three Festive games yielding 3 points from 9.  Those missing 6 points, which we could easily have secured, would have put us joint top of the table.  Instead we have to "make do" with 4th spot.  A position that was beyond our wildest dreams after the defeat to Cardiff but we travel to South Wales for the return match safe in the knowledge that we remain unbeaten since that fateful night. Was today's performance a festive blip? I hope so.  All the team seemed to have a collective off day with Snoddy and Mad Max leading the way in "offness" but the pleasing way that Lord Larry's substitutions turned the game and the way the team battled to the end offered the only positives from a game that both the fans and the team will want to forget.

Next up is the long trip to Cardiff on Tuesday night.  A 10 hour round journey on a school night won't stop HC and I cheering on the mighty whites at Cardiff's new stadium.  A chance for some revenge in the land of the Leeks? Hopefully.  I just hope our somewhat leaky defence can keep a clean sheet against the stuttering Bluebirds.  Now that would be a nice boost before we take on the free scoring Arsenal aristocrats in the FA Cup. Keep the seatbelts fastened and the Oxygen mask handy........I think January might be a turbulent month.
Can't wait.
MOT

Posted by Andrew Butterwick at 01:19

Fantastic read again, We went down to the game from Carlisle and I agree Kilkenny made a creative difference as soon as he came on. I think he is so under rated and one of The whites most important players! I love reading about the urinal half time debates they crack me up! Keep up the good blogging MOT

Cheers mate.
Killa will be a massive miss when he's in Oz. we need some cover in the January window for sure.
MOT