Selby station was full of Leeds fans ready for the final home game of the season.  There was an excited buzz about the place despite the long odds against Leeds pulling off a miracle and getting into the play offs. Those fans who had witnessed the loss at Selhurst Park had only one thing on their mind though.  Please God don't let Jake Livermore start the game!  Once in Leeds the excited chatter and anticipation of a match day was everywhere from the train station right up to Elland Road.  Brother Chris had joined the Happy Chocker together with Carl as we made our way to the Old Peacock.  The full house signs had long been up for this match in anticipation of a triumphant procession into the play offs for the mighty whites but in practice all we could do was to win this game and hope Forest implode against Scunny later in the afternoon.  Mmmm not very likely. 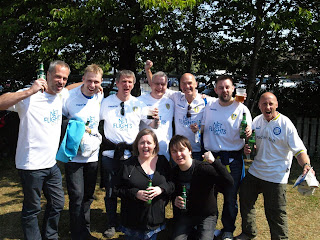 The Twitterwhites had gathered at The Old Peacock to meet old acquaintances and put faces to names known purely from cyberspace.  Even Vic was there all the way from Argentina. Bizarrely there was a not very good replica of the FA Cup doing the rounds for photo opportunities.  I didn't quite understand the relevance of it but Turkey Twizzler captured the cup and then struggled to hoist it above his head for the iconic photo.  News of the team was good.  Livermore was dropped along with Snoddy to make way for a 4.4.2 formation accommodating McCormack up front and a mid field of Killa and Howson. That felt better!

The old stadium was packed for the lunchtime kick off with a kaleidoscope of white, yellow and blue colours filling three quarters of the ground. As the game kicked off I convinced myself that a win by two goals could just send us to QPR with more than a forlorn hope.

It has been a mystery to a lot of Leeds fans why McCormack has spent most of the season warming the bench.  He was about to justify all those who had posed just that question.  He immediately made an impact with intelligent runs down the channels upsetting the rather large Burnley back four.  Leeds had started with just the right sort of tempo that we had craved for the last eight or nine games and chances started to flow.  Paynter went close, well closeish, McCormack tested Jensen in the Burnley goal before firing a dangerous free kick just wide.  Killa and Howson were looking good in the middle of the park, the sun was shining and everything felt good.  "If we get an early goal 4.0 is possible" I optimistically wished. 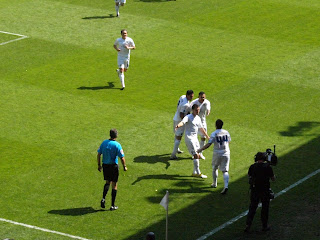 At the other end that bubble of optimism was suddenly pricked as Kasper thwarted a Burnley attack with a desperate lunge that somehow kept the ball out of the net.  Mmmm maybe it wasn't going to be that easy after all?  But the pressure was building on Burnley.  Billy P headed weakly from a good cross and it nearly sneaked in and then McCormack's eager running and movement paid dividends as he latched onto a sweet through ball and finished with the coolness of a Polar Bear with his bum stuck on an iceberg. 1.0 Leeds and only 30 minutes gone.  I could feel Bill Davies' wrinkled face frown even more and I smiled contentedly.

Leeds' play was laced with the inhibition we had seen earlier in the year as if the shackles of the pressure of pushing for a play off place had gone and we were playing with a freedom that we have sorely lacked of late.  But just to keep a sense of reality in proceedings Burnley so nearly equalised when Iwelumo flashed a header wide.  Still we got to half time with a clean sheet and a goal to the good.  The final instalment of this year's gent's half time debate was a positive one.  "You can tell Livermore's not playing" "Why hasn't McCormack played all year"  "Will Paynter ever score again" were some of the more repeatable quotes.  Life is so black and white to the Urinal philosophers!

The 2nd half set off at a pace with Paynter going close twice but yet again he failed to find the right side of the net.  "If we get a 2nd they could fold" I suggested to Carl hopefully as I still hung onto the hope that we could put some pressure on Forest by clawing back some of the goal difference.  The increasingly tense atmosphere was tightened even more on the hour as a Burnley boot caught Mad Max acting as a catalyst for a free for all that resulted in 3 yellow cards but apparently not one for the guy whose foot was adjacent to Gradel's Adam's apple?  Once the handbags at dawn episode had drawn to a conclusion O'Brien fired a good header too near Jensen in the Burnley goal.  We could have done with that goal.  McCormack was soon in the thick of it minutes later though as he screwed a shot towards the corner of the net only for Jensen to claw it away to safety.

As the clocked ticked on so my optimism diminished.  One goal was not going to be enough to make next Saturday's final game exciting I'm afraid.  Kasper kept hopes up with a fingertip save from a free kick.  Snoddy replaced the lumbering Paynter but hardly got a kick for the remaining 15 minutes as it was left to Sanchez Watt to squeeze two glorious chances into his 5 minute cameo at the end that had they gone in, which they should have done, would have left everyone with a spring in their step as they left the stadium.  In the end we had to settle for a 1.0 win that was highly unlikely to trouble Forest or Millwall. 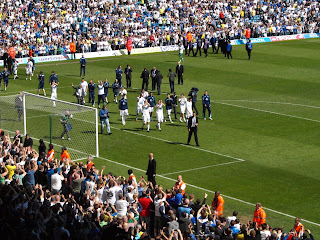 The players came back onto the pitch at the end for a lap of honour.  You couldn't help wondering if we would see the likes of Schmeichel, Killa, Snoddy, Howson, Johnson and Becchio in a Leeds shirt at the Theatre of Hope next season?  Time will tell.  As the fans streamed away to listen for news of Scunny's efforts at Forest you just knew that we had just heard time called in the Last chance saloon for Leeds' slim play off hopes.  A 5.1 victory for Bill Davies' men leaves Leeds hoping that Forest lose next week and we beat QPR whilst overturning a goal difference deficit of 6.  Even I don't think that's possible.

So the sun sets on another season that has seen Leeds flirt with the play offs for most of the season before fading badly on the final furlong.  HC, brother Chris consoled ourselves over a few pints and an Akbars curry.  Things didn't seem too bad after that.............................after all there's always next year...........trips to Brighton's new stadium, Blackpool, West Ham and possibly even Bournmouth to look forward to.  First we've got a chance to spoil Mr Warnock's promotion party at QPR next Saturday, that's always assuming they avoid a points deduction this week.  Should be a good end to the season?
Can't wait.
MOT

Posted by Andrew Butterwick at 21:32