As our season comes to an end it is difficult not to look back and reflect on the highs and lows of another rollercoaster campaign.  So join me as I enjoy a last glass of the 2011 vintage of Chateau Les Blancs Puissants and  look back at six of the best (and worst) games that have defined our season. 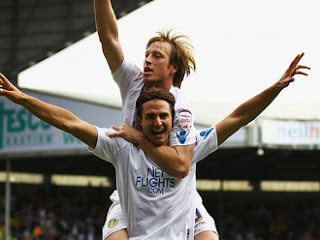 Millwall arrived at Elland Road for this lunchtime clash flying high at the top of the table after two impressive wins whilst Leeds had just the solitary point courtesy of their stirring 2nd half performance against Forest.  Doubts remained in many fans minds as to how Leeds would cope with the step up to the Championship and defeat against our "bogey" team would just add to the early season worries.  Early in the game it seemed the Millwall hoodoo was alive and well as Leeds' bright start was ruined by a bizarre Richard Naylor headed own goal. But Leeds comeback was swift as the attacking style of play that would gain many plaudits this term kicked in Lloyd Sam notched his 3rd goal in 3 games (what happened to him?).  Leeds went onto dominate the game but had to rely on two late goals from Davide Somma to secure three priceless points.  The arrival of Somma showing true class and the attacking flair inspired by Watt, Sam, Howson and Killa boosted the confidence of the Leeds faithful.  Maybe we could compete at this level after all?  September would be a testing month though with the visit of Swansea to Elland Road followed by three back to back Yorkshire derbies.  At least the last game should be an easy one...........Preston at home! 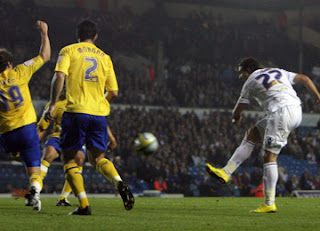 Despite that horrendous night at Oakwell September had not been too bad for Leeds, victories against the Blunts and an impressive Swansea side mixed with a goalless clash with Donny had left us handily placed in 5th as we prepared for the visit of lowly Preston North End.  "If we win tonight we can go second" was the thought on most fans minds.............and when Davide Somma put Leeds 4.1 up after just 39 minutes that seemed a formality. I famously commented "Even Leeds can't throw away a 4.1 lead".  What followed next would haunt us to the end of the season as somehow we managed to concede 5 goals without reply in one of the most bizarre games I have ever seen.  In the world of "what if" those 6 goals conceded and 3 points lost in this game ironically equate to the exact shortfall we have against 6th placed Forest as we go into our final game.  At the time my thoughts were much more pragmatic.  This defeat came all too soon after the Barnsley debacle. On this form it was going to be a long hard winter.

By the time Cardiff arrived at Elland Road we had suffered two further defeats to Leicester and Ipswich with the only ray of sunshine an away win at troubled Middlesboro courtesy of a spectactular winning volley from Mr Becchio.  Ominously Cardiff were slugging it out in the top two with QPR.  This was going to be another benchmark game for Leeds..............and we were on the telly again.  Before the game all the questions related to our ability to keep Bellamy, Bothroyd and Chopra quiet.  As soon as the game started it was clear to everyone in the ground and the TV audience that Leeds had absolutely no answer to Cardiff's attractive pass and move style.  The Welsh side won 4.0 and we were lucky to get nil.  With this defeat we dropped to 16th place just 6 points above the dreaded relegation places.  These were dark days in LS11.  Where an earth do we go from here was the question on everbody's lips?  As it happened the answer was remarkably on a 12 match unbeaten run that would only end when we played Cardiff again in the new year.  Funny old game isn't it? 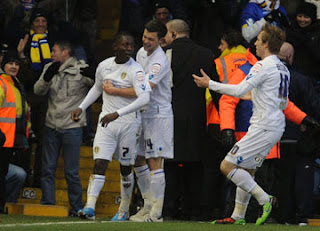 Buoyed by a solid run of form that had seen goals flying in the opposition's net with pleasing regularity we had climbed to 4th spot by the time Warnock's high flying QPR side arrived at the Theatre of Hope.  They were unbeaten away from Loftus Road and were steamrolling teams as they strode confidently towards promotion. This was the ultimate acid test of our new found form.  The previous week we had turned round a 2 goal deficit at Burnley with a stunning 2nd half performance capped by Howson's 85th minute winner.  Confidence was high and justifiably so.  Lord Larry had now settled with an effective 4.5.1 formation that Jonny Howson was excelling in.  Once again the words "If we win we can go 2nd" were on the lips of excited Leeds fans.  This time we did as a terrific performance gave the Leeds faithful a 2.0 win with the ever improving Mad Max netting twice to send Mr Warnock home nearly speechless.  The delighted Leeds crowd now truly believed we had a chance of automatic promotion never mind the play off's. 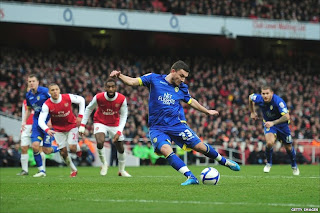 When Leeds were drawn away to Arsenal in the 3rd round of the cup thoughts immediately turned to the previous year's conquest of the Salford Yanks.  We couldn't repeat the feat at the magnificent Emirates Stadium could we?  Well the 9,000 lucky Leeds fans who got tickets for the match thought we could and descended on North London determined to rudely upset the Library atmosphere at the home of the Gunners. A fantastic day was had by all as the imperious Snoddy gave Leeds a lead they hung onto until the final minute.  Leeds fans streamed away disappointed whilst the Gooner's fans were just glad to get another bite at the cherry.  A 1.1 win for Leeds!  Unfortunately Leeds couldn't finish the job at Elland Road but they had already sent a clear message to the Football world.  The sleeping giant is awakening and marching back to the Premier League.  Halcyon days!


Leeds' unbeaten league run came to an end at Cardiff early in the new year and from there on in their form spluttered with good performances at an absolute premium.  By the time we arrived at Pride Park in April we were in a dog fight for the last play off spot.  Defeat the previous Saturday at Millwall had wounded Leeds' play off hopes badly but victory at Derby would staunch the blood flow enough to get them back on course.  Old cliches like "Last chance saloon" and "must win game" peppered the media as Lord Larry tried to find the illusive winning combination for this crucial game.  Sadly the game summed up Leeds' form, or lack of it, as they snatched defeat from the jaws of victory by conceded two quick goals immediately after Mad Max had given them a deserved lead.  Although we remained in 6th spot we were now only a point ahead of the chasing pack and they all could smell the blood of a wounded prey.

So near yet so far away?


So in the end we will finish short of the play off's mainly due to our poor form through March and April that saw us yield just 2 wins from 9 games. A case of so near yet so far away me thinks.  Clearly the continued problems in keeping a clean sheet have proven to be too heavy a burden for the team to carry despite rattling in 79 goals at the other end.  In summary I feel we have done as well as we could have hoped for with the current personnel.  Arguments will rage as to whether we should have invested more in January and why we rely so heavily on the loan market to rectify weaknesses in the squad.  Overall I believe Lord Larry has done a good job for the first season back in the Championship laying a good foundation for a more successful attack on promotion for next year.  Key to that will be the comings and goings over the summer.  Finally we have our trip to QPR to wrap up the season.  It would be nice to wipe Mr Warnock's grin off his face for a 2nd time this season wouldn't it?
Can't wait.
MOT
Posted by Andrew Butterwick at 17:37