Glorious sunshine was streaming down as the Happy Chocker, the Quiet One and yours truly set off on the long trek to South Bermondsey for the latest instalment in Leeds United's championship campaign.  Some of the usual matchday questions surfaced as the train pulled out of York station en route to Kings Cross.  Will Lord Larry keep the same team? Can we keep a clean sheet? and why are there always a number of anoraks stood at the end of the platform taking pictures of trains?  Whilst I don't think I will ever get a sensible answer for the last question the first two provided a healthy debate as we sped south.  HC felt Livermore would get a start in front of Bannan, which he subsequently did, but inevitably neither of us could see a scenario where we kept the Lions goalless. 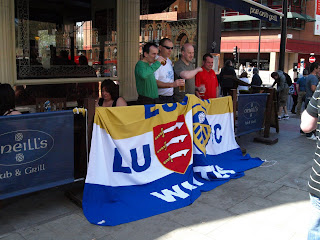 Pre match refreshments were taken in O'Neil's bar on Euston Road where a gaggle of Leeds fans took advantage of the balmy weather and quaffed their ales outside.  Big Steve, George and Chris joined us as we tried to muster up some confidence that we could return north with anything more than a point.  I've got to say it was difficult.  The last leg of the trip was uneventful and we were soon in the away end at the New Den.  The first sell out crowd of the season for Millwall had turned out to try and urge their team on for a victory that would keep them on the shirt tails of the play offs.  The atmosphere was already electric as the teams took to the pitch.  Just why a significant minority of the home fans think its cool to wave Turkish flags and sing about Istanbul is beyond me.  It's just sad and rather sick that one set of fans revel in the fact that two of their rival's fans were murdered following their team in Turkey.

Lord Larry had a slight surprise in his team selection as Paul Connolly came in at right back with Lichaj switching to left back in place of the struggling McCartney. Millwall started on the front foot as Leeds dug in to withstand the early onslaught. Kenny Jacket's charges tested the brittle Leeds back line forcing a couple of nervy corners that were easily repelled.  At the other end Mad Max sent a spectacular overhead kick goalwards with the linesman's flag fluttering annoyingly in the back ground.  The opening exchanges were frenetic, if not a bit scrappy, in keeping with the tense and nervy atmosphere that had infiltrated the players.  In the stands both sets of supporters traded bile and insults back and too.  A long ball flew towards Morison who had O'Brien stuck to him like glue, that is until he slipped and let him in on goal but Bromby strode across and made a vital perfectly timed tackle inside the box.  Shades of Moore's tackle on Pele? We seemed to have coped quite well with the first twenty minutes and were coming up for air as the home crowd's initial vigour died down.  Maybe this could be our day I suggested to HC?  He didn't look that confident.  And a couple of minutes later he was proved correct.  Millwall were awarded a soft free kick on the edge of the box by the easily influenced ref.  James Henry stepped up and fired a superb free kick past the flailing Kasper in the Leeds goal.  Wall 1.0 Leeds.  The home crowd erupted into a sea of unbridled joy that lifted the volume level to another level. 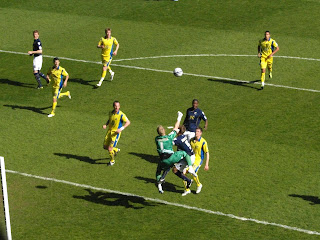 We needed a quick response but rocked by the goal and feeling the heat of the hostile crowd we were on the ropes as the Lions roared forward looking for the kill. Desperate defending conceded a corner.  Liam Trotter stood in front of Kapser.  As the ball came across Kasper pushed Trotter away but straight into the path of the ball and one prod of the foot and we were 2.0 down.  A poor goal to concede but consistent with our defensive abilities this year.  "They could get a hat full at this rate" HC grumbled.  On the field tempers were fraying fast none more so than Snoddy's as a combination of some niggling tackles and the crowd's venom raining down on him got to his short Scottish fuse.  He entered the referee's notebook for retaliating to yet another clumsy challenge and seemed destined to add a red to the yellow card he already had.

Lichaj raised hopes in the away end as he wriggled into the box a fired a shot that bobbled around the box before being cleared and then the best move of the match so far saw the ball swiftly move across to Mad Max who beat his man and crossed to Becchio who's shot was somehow blocked with Forde in the home goal beaten.  That flicker of hope was all the Leeds fans needed to crank up the decibels as half time approached.  Snoddy's running battle with the crowd and Trotter carried on right up to the half time whistle.  The Leeds team trooped off for a verbal bashing from Lord Larry as the crowd reflected on an excellent half for the Lions. 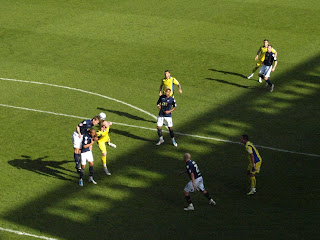 The fans around me seemed to have a million solutions as to how to change things but most of them would have ended up with no Leeds players on the pitch because they were either shit or lazy.  As Eddie Gray said last week "Football is a game of opinions and everybody's got a different one"  Lord Larry's opinion was that the 4.5.1 formation wasn't working so off came Snoddy to be replaced by Somma as we went with a more attacking 4.4.2 formation to try and get us back in the game.  The move started to pay dividends almost immediately as Somma inspired some purposeful attacking from Leeds and suddenly it was the Lions back four who were looking shaky.  The renewed hope filtered straight through to the away fans who grasped the impetus and urged Leeds on.  Lichaj flicked a lovely ball towards Somma who's touch just diverted the ball beyond the home defence where Becchio guided it past Forde into the net. 2.1 and game definitely on. Could Leeds pull off another 2nd half turn around as we did against Forset, Donny, Burnley et al?  Hope springs eternal and when Mad Max latched onto an exquisite ball from Somma to drive the ball goalwards I thought we were level but a fine save from Forde denied the Ivorian gem.  Leeds were on the front foot though but could they make it count? Errr no.

Millwall punctured Leeds' bubble of hope with a bizarre goal as a shot appeared to ricochet off a Leeds player and everyone stopped except Morison who nipped in and poked the ball past Kasper. 3.1 and game over.  Yes Leeds did push forward and leave gaps at the back that Millwall could and should have exploited and yes we did pull a consolation goal back deep into added time but it was too little too late.  Leeds fans around me in the stand found consolation in fighting with themselves as the day degenerated into a shambles.  A 3.2 defeat that severely dents Leeds promotion push and leaves a nervy run in to the end of season with eager contenders, including Millwall, now hovering with intent eyeing that last play off place.  Lichaj was the best performer in a Leeds shirt but overall it was a disappointing performance from Leeds.  Millwall are a good hard working team but a Leeds team on the top of their form would have won this game.  In the end the last minute goal from Andy O'Brien may well be significant come the end of the season as it reduced the damage to our goal difference and looking at the table goal difference could well be a factor in deciding the last play off spot come May 7th?

The journey home  seemed a long one not helped with news that Swansea had beaten Norwich.  Leeds have a 4 point cushion from the chasing pack but with games against Derby and Watford still to come this week it's anybody's guess where we will sit in the table come next Saturday night.  Sometimes I hate football.  At least Jim will be happy with today's proceedings.

Derby away on Tuesday night.  Another crucial game in the season's promotion merry go round. More nerves to be frayed me thinks?
Can't wait.
MOT

Posted by Andrew Butterwick at 00:17

A top of their form leeds side would've won! It's that kind of arrogance that makes people hate you.

Anon,
As I say in in the post Football is a game of opinions and in my opinion a Leeds team playing on the top of their form would have won yesterday's game. But they weren't and they didn't. The better team won on the day. If you perceive that as arrogant then so be it. I suppose we should adopt your slogan "No one likes us we don't care"

Good report of the game mate, but i do disagree with you that Leeds would have won if they had been on top of their game.Millwall were also capable of playing a lot better,ask any OPR fan. If Millwall had played like they had in the last 5 games all season we would be in line for automatic promotion. Never know we might see you at wembley in the play off final

Steve,
You make a fair point. I suppose I was trying to express my frustration at Leeds not playing aswell as they can. Wembley play off final? Quite possible. I somehow don't think the London Met will be hoping for that one though!
Regards
Andrew

millwall stop teams playin at the den,thats y we r so good at home. leeds are a good team but can never cope with the atmosphere at the den