Selby station was alive with football fans as I arrived for our "Mission Impossible" trip to QPR.  The usual faithful Leeds fans were gathering together with a group of Darlo fans en route to Wembley for the FA Trophy Final.  I was meeting the Happy Chocker in London so I had plenty of time to reflect on the game ahead.  As the train ventured South other fans of various persuasions joined.  Mansfield, Forest, Arsenal and even a QPR fan joined the happy throng.  I do like the special buzz of match days.  There's always one knobhead though isn't there?  As we scooted through the outskirts of London a drunken rendition of "We all hate Leeds scum" attacked my ears.  So was it a nervous Forest fan? or a worried QPR fan with points deductions on his mind or possibly the Arsenal fan still miffed that we had drawn at the Emirates?  No it was a Mansfield fan ffs!  I just laughed.

At Kings Cross a bevvy of Oompah Lumpah Hartlepool fans scurried across the concourse searching for the right connection to Charlton as I waited for the Happy Chocker.  Big Steve joined us rather sheepishly.  In the week he had cut a phone call short saying he had to go and hastily hung up.  Little did he know that I knew the reason for his hasty retreat.  He was in his car in his driveway when his wife, who works with Mrs MOT, successfully caught his attention by lifting her top to reveal her prize assets through the lounge window! It never ceases to amaze me what women tell each other over a coffee at work. 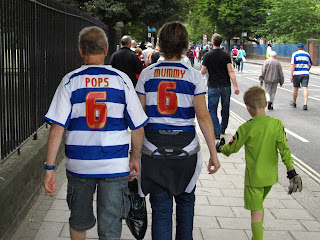 So back to the game.  The QPR fans were a worried bunch as we walked to the ground down Wood Lane.  The FA hearing into their transgressions over the signing of Faurlin had failed to deliver a verdict and now the chance of QPR dropping into the play offs was as a distinct possibility.  After all the FA had announced yesterday that a decision wouldn't be made until next week............................. so in true farcical FA fashion they then did a complete U turn and announced before the kick off that there would be no points deduction and everything in the garden was rosy.  QPR received a fine of £875k for breaching two FA rules relating to players agents and third party ownership of players.

Once inside the "compact" ground, ie cramped and ill equipped, the home fans were in a sort of party mood.  The news that they would get no points deducted  lifted them and they were all soon waving the free flags they'd been given before the match.  Cute!  Lord Larry was without McCartney and Snoddy with Connolly returning to the starting line up. A certain Paddy Kisnorbo was on the bench making a welcome return after missing the whole of the season.  How we've missed him. 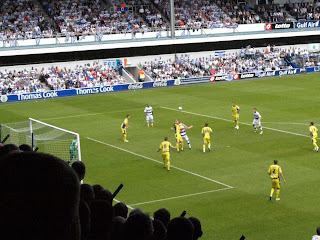 If we had any chance of Mission Impossible then we had to score first.  After 30 seconds the match became an end of season exhibition match as Helgurson tapped in the opening goal from an offside position after Kasper could only parry a shot straight to his feet. 16,000 blue and white flags were fluttered in appreciation. "We're top of the League, We're top of the league, We're QPR, We're top of the league" the home fans sang in glee.  The blunt response from the hardened travelling hordes said it all. We don't give a F***, we don't give a f***, We're Leeds United, we don't give a f***.  The BBC sound engineers were frantically reaching for the mute button for the away end microphone as Auntie Beeb broadcast QPR's coronation match to the nation.

Leeds were shaken by the early goal and the sweet passing game the home team were playing.  Kasper punched another stinging shot into the path of Helgurson but he couldn't convert.  This could get embarrassing I thought. If we concede again the flood gates could open.  Once Leeds had drawn breath though they started to claw their way back into the game.  The lumbering Paynter appeared to be pulled to the ground with only the goalie to beat.................free kick on the edge of the box but no card?  Bradders hit the free kick into the wall.  Leeds were now getting the upper hand and when an angled through ball from Naylor speared beyond the R's defence player of the year Mad Max beat the oncoming goalie to equalise for Leeds.  1.1 and the decibel level in the away end cranked up another notch.  The script for the coronation game was going wrong for Mr Warnock and his team.  Leeds finished the half on top with McCormack standing out as a thorn in the new champions side.

The half time trip to the Gents was interesting as the stewards and Police strove to check tickets ?????? in the cramped concourse before we were allowed into the smokers den that's sometime used as a toilet.  News that Palace had already started their summer holidays and Forest were strolling to an easy win finally extinguished any lingering doubt that we would be using our Play Off final pin number this year. 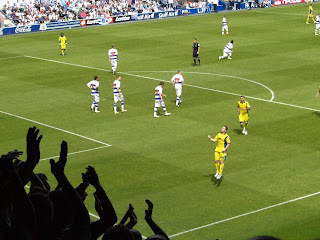 Leeds started the 2nd half as they finished the first playing some attractive Kilkenny inspired football and with McCormack making intelligent runs into the channels it was Leeds not the Champions who were looking dangerous.  Kasper had to be alert at the other end though as QPR looked for a goal to crown their Champion season with a win but Ross McCormack was about to spoil the party.  He wriggled his way through on the edge of the box turned and screwed a shot that deflected exquisitely over the QPR goalie's head and into the net.  Sweet! 2.1 Leeds and time for Leeds to show the Champions some of their footballing qualities for the 2nd time this season.  Somma, who was on for the ineffective Paynter, looked lively as Leeds played "ole" football.  Good as it was to watch I couldn't help thinking what might have been.  We were about to claim an impressive double over the champions yet we'd thrown points away against relegated Preston and Sheff Utd.  Sanchez Watt came on for what will be presumably his last Leeds match and again nearly scored but for a couple of fluffed shots.    Kasper made a class save at the other end to preserve the lead. Then Naylor was hauled to the ground in the penalty box but not according to Mr Clattenberg the Ref. The biggest cheer of the afternoon from the way fans was reserved for Kissy's return to first team action as he played out the last 12 minutes with his trade mark bandage wrapped round his head.

So Leeds' season closed with a victory and for once without the heart stopping drama we have become accustomed to on the seasons final games.  Overall 7th position in the Championship is a good effort but one that many fans, with an envious eye on Norwich, will think is frustratingly short of what could have been achieved this season.  A close season of lots of comings and goings at Elland Road me thinks. 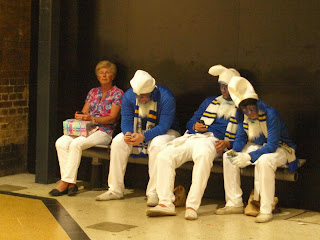 Kings Cross station was awash with fans heading home.  Three Leeds Utd smurfs sat disconsolately waiting for their train.  It's been a long season and as ever one with lot's of ups and downs. Over 5000 miles clocked up following Leeds away this term.  Will we make it all worthwhile next time? Can we go one better next season? Who has played his last game for Leeds out of the current squad?  All questions for next season but for now thanks for reading my musings and rants and god willing we'll do it all again in 13 weeks time!
Can't wait.
MOT

Posted by Andrew Butterwick at 21:42

Thanks MOT. another great season of blogging. see you next year.

Spenner White,
thanks for the comments. Roll on 6th Aug 5.20pm!