It's amazing how quickly the matchday shot of adrenaline surges through your veins the minute you step onto that famous highway, Elland Road.  Even though I was two and half hours early for the kick off, even though this was just a friendly match, the minute my nostrils picked up that unmistakable whiff of dubious burgers and my eyes feasted on the eagerness of fans starved of proper footy action for 11 weeks hurrying to their pre match watering holes my body was once again in full blown matchday mode. The season proper doesn't start for another week but for over 20,000 fans this was the start of another tense, tortuous and hopefully successful campaign that will inevitably touch every emotion known to man before closing next May. 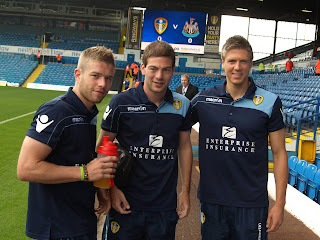 Having had the pleasure of meeting up with the rest of the Yorkshire Radio fans panel for the pre season photo call I made good use of the location.............the home team dugout........ where I sat for a minute dreaming of a dramatic first appearance for the mighty whites coming off the bench to score the winner in the 90th minute against the the Salford Yanks................but I think at 53 years of age it may be a tad late for that?  My vantage point did however give me the chance to exchange pleasantries and take a few snaps with the players as they arrived for the game.  After my dreaming I retreated to the bar for another matchday ritual that I had so missed................the thermo nuclear heated Holland's Meat and Potato pie.  Just how they manage to get them that hot in a simple microwave oven is a mystery to me and it's no good leaving them to cool they just seem to get hotter.  So with the acceptance that the roof of my mouth would not recover until Thursday I tucked into the tasty piece of radioactive waste.

My seat was ideally situated right behind the away dugout.  Lord Larry had chosen to start with what one would assume is his starting eleven for next Saturday.  Lonergan in goal, Ben Parker got the fateful left back shirt, Ross Mac up front with Brown and Clayton in centre midfield allowing Capt Fantastic to drive forward, Max and Snoddy on the wings and Paddy and AOB in the centre of defence. Connolly filled the right back role.  Alan Pardew sent out a strong line up with only Krul and Ameobi being the notable absentees from the starting eleven.  Alan Smith had not braved the wrath of Leeds fans and had taken a rain check. A minutes applause for the late Lord Harewood was ruined by a minority of the large travelling contingent and then we were underway on the immaculate Elland Road playing surface. 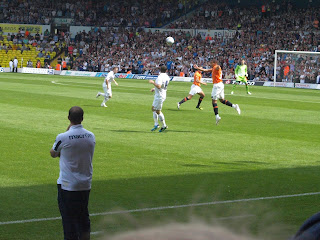 After the relative lack of recruitment activity over the close season I would suggest the mood amongst most fans was hovering between pessimistic and realistic as Leeds shot out of the blocks playing assured and crisp football. Within 5 minutes we were ahead as the Toon goalie, Fraser Forster, spilled a simple cross at the feet of Kissy who tapped the ball in from no more than 2 yards.  Not for the last time in the game Alan Pardew was shaking his head and scribbling frustratingly into his note pad in front of me.  And it got better for Leeds.  Going forward Ross Mac looked sharp and was dragging the laborious Toon defence all over the pitch whilst Mad Max and Snoddy opened up the fragile Newcastle flanks at will.  Unfortunately Mr Pardew was taking careful note of this.  At the other end Paddy was putting his head where other players fear to put their foot in order to stop shots and Mr O'Brien was looking the perfect foil for the unbandaged one.  Just on a quarter of an hour Leeds had the ball in the net again only for Max's header to be disallowed for offside.  This was looking too easy for Leeds as the kop taunted their Bar Code rivals asking "Are you Blackpool in disguise?" in reference to their poor play and even worse away strip.

On 20 minutes  Mr Pardew's head was again shaking as Mad Max wriggled through and hit a stinging drive that Forster just managed to tip over.  "Sign him up, sign him up, sign him up," pleaded the Geordie hordes.........and they weren't talking about Fraser Forster!  The centre pairing of Clayton and Brown was beginning to gel...............with Brown snapping at opponent's heals like a rattlesnake on speed and Clayton easing his way into the game with some nice touches whilst Capt Fantastic was once again showing his immense talent as he picked his way through the Toon midfield like a ballerina through a minefield.  Things were looking good. Too good I was thinking as Pardew's notebook was now overflowing with notes.  On this evidence the team that was hinting at Premiership quality were not the Tangerines but the mighty whites and Max, Snoddy and Howson in particular. 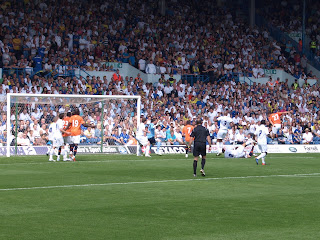 Then against the run of play Toon equalised as Taylor smashed in a deep corner as Brown appeared to be bundled to the ground. Leeds were soon back on the attack as they finished the half on top after a blatant handball in the box was denied by the linesman after the ref had initially blown for the spot kick????  Half Time 1.1 and a very encouraging 45 minutes for the Leeds fans in the packed ground (East Stand out of use).  The mood swingometer had firmly moved from pessimistic to optimistic for the coming season. 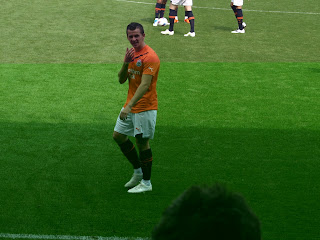 At the start of the 2nd half Joey Barton chose to offer out a Leeds fan who had shouted some "advice" to him as he passed by leaning over the dug out to have a verbal duel with fan who had irked him.  "He'd start an argument in an empty room" a wise sage commented behind me. Howson lit up the opening salvos of the 2nd 45 minutes with a mesmerising run and shot that had the Toon defence floundering as Leeds continued to have the better of the game.  Bromby and Lees were now at the heart of the defence as Sam also joined the fray. Mendy and Bodor followed them onto the pitch as both managers rung the changes. Inevitably the changes disrupted the flow of the game but it was Leeds who were still playing the better football and deservedly retsored the lead when Sam dispossessed a hesitant Toon defender to shoot through Forster into the net.  Newcastle's penchant for slack defending seemed to pass over to Leeds within a minute as the Toon equalised through Vuckic.  Leeds were not to be denied though as Paynter grabbed a winner with a typical centre forward's goal on 85 minutes as he headed in from 3 inches out. 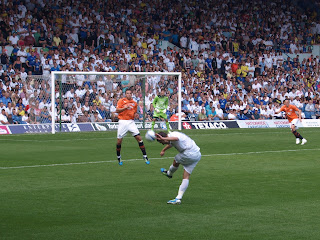 The referee blew his whistle to bring to an end a very entertaining game played in a good atmosphere.  Howson was the man of the match by a long way with pleasing shows from AOB and Paddy at the back, together with the midfield duo of Clayton and Brown.  Ross Mac had a lively game running the front line and it goes without saying that Max and Snoddy were sublime.

The happy buzz that emanated from Elland road as we streamed away from the game was testament to a very encouraging performance from Lord Larry's charges.  Yes it was only a friendly but even on the much restricted resources available Leeds appear to have a team that will certainly be ready for the difficult challenges ahead in the Championship.  The kop were singing "Leeds are going up" towards the end.  It's a long, long season but on the evidence of today don't bet against it....................I just hope we don't lose any players before the transfer window closes?

Southampton away next Saturday.  It's not been a happy hunting ground of late. I've a sneaking feeling that's about to change come 7.20pm Saturday evening!
Can't wait.
MOT

Posted by Andrew Butterwick at 22:57