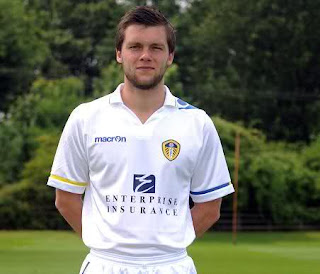 Another week of the close season passes by and the Leeds United "new employee induction pack" is still sulking in the corner of an office at Thorp Arch muttering to himself.............don't know why I bother, I sit here week in week out waiting for someone to come and use me but nothing happens. All the other induction packs at the Championship contenders seem to be working lots of overtime.  I was speaking to the guy at Leicester only this week........he's coining it in........never stops he says, and it's the same with that Cockney git at West Ham always busy and with top draw big tippers. Even the brash newcomer from Brighton is full of himself.  "Loadsawork here mate" he bragged with gay abandon "and we've got a new stadium to boot" he gushed.  "Bet you wish you were inducing Craig Mackail Smith"? he taunted.

You see that's the problem when you've got nothing to do.  There's only so much filing and playing solitaire on the computer you can do to make yourself look busy so I thought I 'd ring round a few of the competition for a chat.  I knew I shouldn't have bothered.  The guy at the Codheads was beside himself with joy......."I hear you're not getting any work" he chuckled.  "We'll soon be kings of Yorkshire again" he bragged in that annoying East Yorkshire twang.  The guy at Middlesboro was a bit more sympathetic as he wasn't exactly rushed off his feet. The poor little induction pack couldn't stomach talking to Birmingham or his old mate from Norwich so he switched on his computer and soon he was trying to beat off boredom with his 97th game of solitaire this week.  Never mind he thought.............next week there's bound to be an explosion of activity?  I don't want my friend, Ethel the tea lady, having to play in goals against Southampton.

Apologies for slipping into negative thoughts but with our first game 4 days away the recruitment campaign has not been a resounding success yet by any stretch of the imagination.  There's been lot's of rumours of who's coming and Lord Larry and Capt Birdseye have bemoaned the fact that their 4 stellar targets have chosen Premier League clubs in front of Leeds but the fact remains we are currently well behind our competition in the transfer market.  The only positive to come out of the close season is that Mad Max and Snoddy are still Leeds players as are Becchio and Howson....................but that could still change before kick off on 6th Aug.  Talk of Bessone and Parker vying for the cursed left back spot isn't going to strike fear into opposing managers or quell the mounting anger of the legions of mighty whites fans.  Neither is the news that Adam Clayton is "relishing the challenge" of filling the void left by Bradders and Killa.

But I will leave this post on a positive note consider this.  We haven't actually bought any "star" players for at least 5 or 6 years but we have secured the services of players such as Beckford, Becchio, Snoddgrass, Gradel, Howson, Delph, Somma and others from a combination of trawling the waste bins of other clubs and our own development scheme and these "unknown" players have dragged the team back to within a sniff of promotion to the Prem.  So all may not be lost............... just maybe waiting in the wings are players like Tom Lees and the next Snoddy waiting to make a lasting impression on the long suffering loyal fans of the best team in the world.............bar none.  Now that would be nice.  Just don't let's be left with Ethel in goals on Aug 6th!
Can't wait.
MOT
Posted by Andrew Butterwick at 16:59