Matchday always has a special buzz about it right from the moment you open your eyes in the morning and today was no exception.  The international break had interrupted proceedings last week but normal service had now resumed as the Happy Chocker, the Quiet One and myself headed for our well worn route to the Theatre of Hope for our clash with the soaring Eagles from Crystal Palace.  Selby station was as we'd left it, frozen in time somewhere in the 1960's, with the same wasps nest on the footbridge and the sign on platform two squeaking away as usual.  Football fans mixed with expectant Kaiser Chiefs fans as the train headed towards Leeds.

Team selection was going to be interesting today. Who was going to fill Aidey White's boots at left back and will Becchio start were the main topics for debate.  I had been sufficiently impressed with Charlie Taylor's cameo at Donny to plump for him in the starting line up while our consensus was that Becchio would start on the bench all of which proved correct.  The first indication that all was not well at LS11 was when the devastating news that Adam Clayton, our surprise star this term, had a back injury and wouldn't be playing reached us as we left Leeds station.  Now I was worried.  Brown was still carrying an injury so who would fill the midfield spot with Mr Howson?  Suddenly the paucity of our midfield resources were frighteningly exposed.  Zac Thompson, Lloyd Sam, Ross Mac, Nunez were all discussed as possibilities as expectations for the game fell to the "I'll take a draw" level.

When the team was announced with Michael Brown filling in next Mr Howson spirits weren't exactly lifted.  What we didn't know was that Capt Fantastic was carrying a stomach bug aswell.  It really was a team of the last 11 standing. 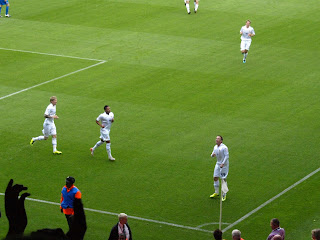 A poor crowd of just 23,000 were in the Theatre of Hope for the kick off with a healthy, noisy contingent of 1,700 Eagles fans.  Leeds started brightly and young Charlie Taylor soon settled his nerves with three impressive tackles and good distribution to the Leeds front men. On that evidence Aidey White wasn't necessarily going to be missed.  Palace looked like a team that had gone 4 games unbeaten in the league as Dougie Freedman's charges passed the ball with confidence but just as I was beginning to worry about the lack of bite in the home midfield we went in front.  Leeds broke quickly and when the ball was played into acres of space in front of Charlie Taylor he pinged an inch perfect ball to the back post where Ross Mac had pealed away from his marker to gleefully head past a helpless Spironi in the Eagles goal.  1.0 Leeds and another goal to Ross Mac's early season haul courtesy of Taylor's mature cross.

This lifted the nervy home crowd who were quite rightly worried with make up of the Leeds midfield post Mad Max and without the injured Clayton.  Still at 1.0 up after eight minutes all we had to do now was keep a clean sheet for the next 82 minutes and we would be fine.  Simples!  Mmmm......................almost immediately the home defence began to look shaky as Palace looked for a quick equaliser.  Tom Lees, who has looked impressive up to this game, was having a bad day at the office and he hadn't even got to coffee break.  The possibility of the much vaunted clean sheet looked about as likely as that on the bed of an incontinent pensioner after a night gorging on extra hot Vindaloo washed down with a gallon of Guinness!  And so it proved true as Brown, clearly not fit (or does he always play like this?), surprisingly gave a stupid free kick away down the Palace right.  From the resultant free kick Lees made a hash of clearing allowing McCarthy to smash home the equaliser.  Bollox, here we go again. 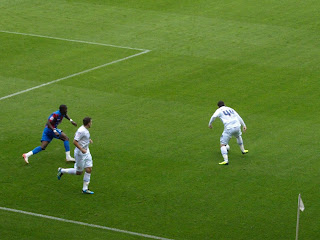 As we've come to expect Leeds looked fine going forward but decidedly inconsistent when asked to defend.  The guy sat next me summed it up perfectly..........."what the f*** do they do at training all week when they're supposed to be learning how to defend?  Play on their X Box?"  The one bright spot of the next 15 minutes was Snoddy rattling the post but the Eagles took the game by the scruff of the neck as they made light of the out of sorts home midfield and went for the exposed Leeds jugular.  They took the lead with a goal that was so simple it was almost embarrassing. They won a throw just into the Leeds half on the left.  The throw was taken quickly into the space where Tom Lees should have been allowing Jermaine Easter to sprint away from the labouring Kissy before delivering a simple ball into the path of Scannell who gratefully side footed home. 2.1 and quite honestly I could see no way back for Leeds.  Howson and Brown were massively ineffective in centre midfield, Nunez appeared to running all over the pitch except the position he was supposed to be in and at the back young Taylor was the only man in a white shirt showing anything like form, determination and effective defence.  We limped to half time only one goal down thanks to an excellent save from Lonergan and a large dose of good fortune.

The half time gents debate with the urinal philosophers was just let's say depressing.  Capt Birdseye got a few mentions along with the archetypal doom and gloom fan who thought "everyone's shit".  The number of Leeds fans who thought we could scrape a draw were in a minority of zero.  Even your uber-optimistic blogger was struggling to find a positive.  There were positives though, namely Ross Mac, who had worked tremendously hard and was a constant threat to the visitors defence and young Taylor playing heroically at left back.

The 2nd half started with the noisy Palace fans scenting blood and disconsolate West Yorkshire fans sulking.  We were looking down the barrel of a well deserved stuffing unless we could pull the proverbial Rabbit out of the hat.  13 minutes of tortuous play had elapsed before Bugs Bunny appeared in the shape of Mr Becchio ably accompanied by Forssell making his Leeds debut.  They replaced Keogh and Nunez respectively with Ross Mac dropping back to Nunez's left flank spot.  Today was not one of our little Honduran's better days.

The impact was immediate.  The home crowd were lifted as the Berbatov song lifted the rafters and Luciano set about rescuing Leeds.  The infectious enthusiasm translated from the crowd to the players and with Ross Mac giving Leeds a more solid shape down the left suddenly it was the mighty whites who were on the front foot.  Palace appeared to have decided to try and hold what they had as Leeds picked up the tempo.  Snoddy was seeing plenty of the ball and even though he wasn't at his teasing best he still caused the Palace defence plenty of problems.  With only one goal separating the teams the possibility of an unlikely comeback started to look more and more likely and on 70 minutes the equaliser came.  Howson, who had thrown up on the pitch, got away down the left only to be brought crashing down by a crude Palace tackle.  Ross Mac stepped up and planted an ideal far post cross for who else but Mr Becchio to plant a thundering header past Speroni.  2.2 and game on.  We couldn't win this one could we? 30 minutes ago it seemed impossible but Leeds were about to do the impossible. 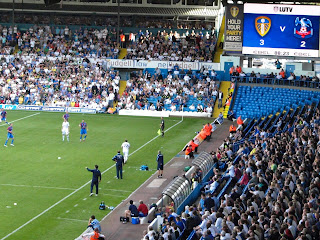 Leeds had the momentum now as they pushed forward for a precious winner.  Brown was replaced by Sam who added extra pace and impetus to the Leeds cause.  All the action was in the Palace half as Becchio strutted his stuff like a returning hero, which he was, and Mikael Forssell struggled manfully to pick up the pace of the game.  As the game entered the last 5 minutes Ross Mac crowned a superb performance with as good a strikers goal as you will see all season.  Forssell expertly turned a cross towards Ross Mac who spun expertly and slotted the ball past Speroni.  I was screaming Goooooooooooooooooal before the ball hit the net as the Theatre of Hope exploded into the Theatre of Sound to celebrate the most unlikely of winners seen at the famous old ground for a long time.  There was still plenty of time for Leeds to try and give their long suffering fans a heart attack though as Palace pushed forward in a desperate attempt to save the game. But in the end the whistle blew and Leeds had triumphed 3.2.  A victory snatched from the jaws of defeat if ever I saw one.

Surprising smiles were plastered on the faces of the mighty whites fans streaming out of the ground.  Leeds had escaped certain defeat thanks to Ross Mac, Becchio and Charlie Taylor with a significant helping hand from Lonergan.  He is certainly a country mile better than Mr Schmeichel in my opinion.  Our defence continues to send shivers down my spine every time our opponents attack.  Surgery is still needed there as it is in the midfield.  Cover for Adam Clayton is non existent and Michael Brown seemed to prove the fans right who think his legs have gone and he commits too many fouls.  Out of adversity there is always hope at Leeds.  Becchio reminded us all what we've been missing with his robust style and instinctive finishing whilst Ross Mac improves with each game and was an easy winner of my man of the match.  Special mention for Taylor though who looked mature beyond his years at left back.

Definitely a game that required the famous seat belt this one.  All is not rosy in the Leeds garden at present but this was a welcome win.  Hopefully Clayton will be back for the return of Killa next Saturday with Bristol and then I think we've got a Cup game against a team we haven't lost against for years.  Should be easy shouldn't it?
Can't wait!
MOT

Posted by Andrew Butterwick at 21:37

Really enjoy your match reports and would like to say thanks, but, please take the music widget off.
There's a noisy conflict with the you tube clips you post....MOT