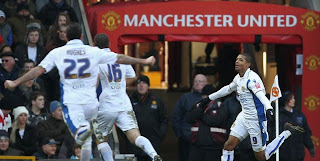 You would think working in Trafford as I do and within a good goal kick from the Theatre of Shite I would be surrounded by legions of Salford Yanks fans..............well no you probably wouldn't come to think of it but the few misguided colleagues who do follow "that" team in Red all seem to be "on message" ever since the draw for the 3rd round of the Carling Cup.  Any mention I might utter of that glorious winter's day on the 3rd day of 2010 when 74,526 fans at the TOS and millions more on television witnessed one of the biggest FA Cup upsets in recent years generates exactly the same response from their bitter lips "Lightening won't strike twice"  Now I do concede that they have hit a bit of half decent form, (5 games, 5 wins and a goal diff of +17) and they are light years in front of Leeds with regards the resources and playing staff they can call on (Leeds' total wage bill for players is less than Mr Rooney's salary alone) so on the face of it they seem to be on pretty firm ground.  So what is the case for a bolt of lightening upsetting Sir Alex Rednose's post match glass of celebratory Red wine? 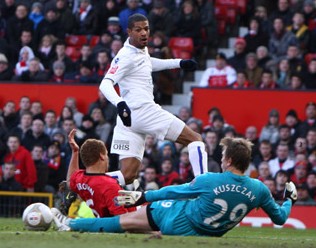 Well firstly, at the risk of rubbing it in again, we have done it before courtesy of that f****** great goal at the scum shit hole by a certain Mr Beckford.  If my memory is correct we were then in the Third Division and the team was littered with superstars of the likes of Crowe, Naylor, Doyle, Michalik and Andy Hughes.  However you assess our stuttering start to this season we do have a bit more quality than was needed last time to beat our fiercest rivals.  Ohh yes I can hear some Salford Yanks fans scoffing at the term "fiercest rivals"  Fair do's but why do your fans still sing "We all hate Leeds scum" as they did during the Chelski match?

So I've established that we have a better team than in 2010 when we did beat them in their back yard therefore nobody should be thinking we can't do it again.  Last time we had 9,000 vociferous fans backing the team and creating a special atmosphere inside the Theatre of Shite.  This time we will have around 30,000 passionate fans inside the Theatre of Hope willing the team in white to do it again. Add to that the likelihood that the Rednosed one will play a somewhat weakened team after their exertions against Chelski the cards start to stack in our favour.  The only fly in the ointment for that theory is that Sir Alex Rednose was incandescent with rage at the loss last time so he will definitely be looking for suitable revenge.  Still I expect Owen and Berbatov to be up front rather than Rooney and Nani. 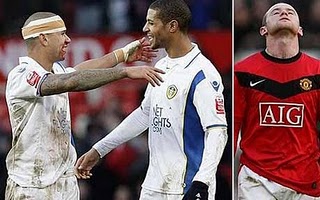 When the teams are announced we will have the poorer team on paper no matter who they populate their starting eleven with.  That is a fact.  But we can make Elland Road an intimidating arena to play in and given half a chance and some early momentum the crowd will lift Leeds.  As was the case last time the first twenty minutes will be crucial.  If we can withstand the first wave of pressure and get to half time still in the game anything is possible.  I know it's a long shot and I know they've just put 8 past Arsenal and then 3 past Chelski whilst we can't keep a clean sheet for love nor money but football is a funny old game.  Can we really do it again?  The form book clearly says no but then again it did on Jan 3rd.  Cross your fingers, fasten your safety belts we're going into dreamland once again......................Becchio to be the hero this time?  On Jan 2nd 2010 I finished my preview post with this quote from the bible which I think is still appropriate:
So Jesus said to Simon the Messiah "Go forth and slay the Red Dragon and lead your disciples out of the wilderness and back to the promised land" MOT: 03:01:10
Can't wait!
MOT


Posted by Andrew Butterwick at 21:56

This is a fantastic blog btw. Its a great read.

Anon,
Bloody hell your right. How did I get that wrong? Thanks for the comments.
MOT