The official mood of the majority of Leeds fans en route to the Theatre of Hope was confident to optimistic.  After all we were hopeful that Adam Clayton would return after injury and we were playing Bristol City who have had a sticky start to the season and don't seem to be able to score goals.  The possibility of a clean sheet was even been muted by some uber optimistic fans.  Pre match refreshments were taken outside the Peacock along with a gaggle of Twitterwhies.  Heavy spots of rain interrupted a debate over who was going to start up front and by the time I reached the sanctuary of the Captains Lounge I was soaked to the skin.  I peered at the team news through rain speckled glasses.  Clayton and White in to replace Brown and Taylor from last weeks starting line up.  Surprisingly Becchio was still languishing on the bench along with Forssell. 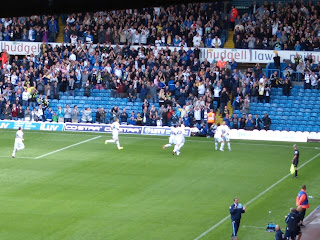 Killa received a hot and cold reception from the Leeds crowd.  A muted chant of "one greedy bastard" never really got going with the majority of Leeds fans giving him respectful applause.  The game kicked off in front of another poor crowd of just 22,000 loyal fans.  What we needed was a good start and that's exactly what we got as with just 3 minutes on the clock a sweet move down the right flank ended with Snoddy laying the ball back to Clayton who arrowed the ball into the top corner with his left foot.  Goooooooooooooal 1.0 Leeds.  Buoyed by the early goal Leeds poured forward looking for more goals. Nunez was looking illusive and threatening whilst Snoddy was attracting lots of attention down the right flank..............suddenly Keogh was released by a pin point ball..........the Bristol defence opened as easy as Jordan's legs..........and there was Keogh with just the octogenarian, David James, between him and his first goal for Leeds and against one of his many former places of employment................but he hit his shot tamely at the ex England goalie and the moment passed.  we should have been 2.0 up and cruising but within a minute Bristol were level.  Who else but Killa latched onto a ball thirty yards out  and shot cum lobbed Lonergan to score in off the bar.  His goal celebration pointed straight to the Leeds directors box.  I think our Aussie ex star was trying to prove a point to Cuddly Ken. 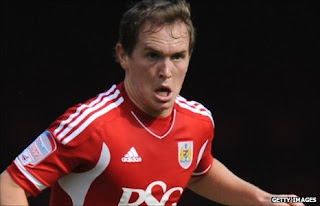 So Leeds' latest attempt to keep a clean sheet had lasted just 11 minutes.  What do we need to do to keep the opposition from scoring?  I wasn't that worried though as on the evidence of the first 10 minutes we looked as if we could score at will. Snoddy was soon raiding down the right flank again this time whipping a vicious cross that beat James but also Keogh's outstretched boot 6 yards from goal.  Will he ever score for Leeds?  But as the half wore on Leeds' play became disjointed, reminiscent of the worst of the Palace game, as Killa started to exert some influence on the game from his deep lying position.  Why wasn't somebody picking him up?  Even we morons in the stand know that if you stand off Killa he will hurt you and if you press him he will give you the ball back.  I started to get that uneasy feeling that this was turning into a disaster day for Leeds and when O'Dea decided to stroke a leisurely ball back to Lonergan straight into the path of the City centre forward I feared the worst.  Not for the first time this season Lonergan saved O'Dea's blushes.  This was dire.  The crowd was deathly quiet having been lulled into a morose stupor by the ineptitude on show by both teams.  Half time came.  Even the Urinal philosophers were silent.  Well what was there to say? We were poor and they were poor. 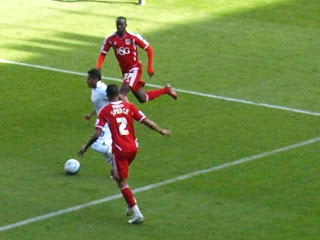 Looking on the bright side Ross Mac was having another good game as was Lonergan.  Clayton was buzzing around in mid field and White was justifying Lord Larry's faith in him but I think I can be sure that none of the rest of the team would be eagerly awaiting the plop of the Sunday papers on their mat to read about their exploits.  Leeds were now attacking the kop but apart from an odd flurry from Ross Mac we weren't worrying David James in the Bristol goal.  In fact I couldn't remember him saving a shot since the one on one with Keogh.  We just didn't seem to be able to string a number of passes together without losing control or giving the ball back to the team in red.  If we do this on Tuesday then we'll do well to keep the score under eight I thought.

Many fans were wondering why Becchio was not on the pitch long before his appearance on 58 minutes.  Nunez  left to make way for the Argentinian having had another frustrating game.  He appears to be more useful as an impact player and he is certainly struggling to fill the boots of the departed Mad Max.  Whilst Becchio's arrival lifted the crowd we were soon back in despair.  Maynard latched onto a simple through ball drawing a lunging tackle from Kissy which brought him a straight red and Bristol a penalty.  Bollox!  Maynard dusted himself down and then drove the ball straight at Lonergan's legs.  Phew! Lonergan had earned a reprieve because the attack that led to the penalty had come from his poor clearance kick.  So we were down to ten men with at least 25 minutes to go.  Could we hang on?  Bromby came on for Keogh followed by Forssell for a largely ineffective Snoddy bar the first 15 minutes.

So we were on "backs to the wall" duty yet again after the 4th red card shown to a Leeds player in 7 matches.  If Sir Alex Rednose had sent a scout to check on our form in front of Tuesday's cup game he would have been chuckling into his notepad.  Leeds were looking ragged.  Somehow though through a combination of bloody mindedness at being down to ten men and Bristol's fondness for spurning chances to kill the game Leeds hung in and started to feed off Bristol's frustration. 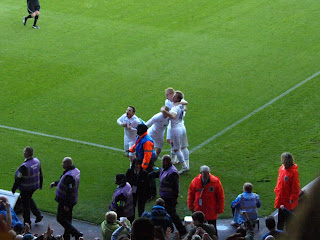 Killa was subbed with 15 minutes to go as he ran out of steam, sounds familiar? The game entered the last ten minutes with Forssell supporting Becchio when Leeds attacked and dropping into mid field when we lost the ball.  Just maybe we could snatch this? I dared to hope.  And we did to again snatch victory from the jaws of a draw.  A long throw looped into the box where Becchio skillfully turned the ball goalwards and Ross Mac swooped like a ravenous eagle to poke the ball home and break the Bristolian's hearts. 2.1 Leeeeeeeeeeeeds!  The celebrations amongst the Leeds fans were heavy on relief as much as they were of joy.  The drama wasn't over yet though as there was still 4 minutes of normal time to go...............plenty of time for Leeds to give their fans a nervous finish!  Bristol went to three at the back and pushed for an equaliser.  A high ball into the Leeds box..............22,000 hearts went into their mouths...............Lonergan came but didn't collect and a Bristol player eagerly slotted the ball into the open net. I slumped in desperation in my seat but then noticed fans around me celebrating and saw the beautiful linesman's flag fluttering in the breeze.  God is definitely a Leeds fan.

The final whistle ended our agony and Leeds had escaped with all three points.  Nobody was quite sure how but we had.  The fans streaming away from the ground didn't have the usual post win smiles more embarrassed grins.............still three points is three points and we didn't deserve to lose to Boro or Ipswich but we did so it all comes out in the wash in the end.  Ross Mac and Lonergan were again the stars for Leeds but Lord Larry has a big job on his hands moulding this team into a consistent unit.  We missed Mad Max badly today.

We bumped into an Arsenal and a Blackburn fan waiting for the train in Leeds station.  The gooner was seething at his team's performance.  "How did you go on today" I asked already knowing the answer.  I then got an eloquent rant about the state of affairs at the Emirates and how they would definitely be relegated on this form.  " I mean how can we compete if we stick to our wage cap of only £70k per week for a player"  the disappointed Arse fan said.............and he was serious! "Fucking hell mate our starting eleven today aren't on £70k a week between them" I advised him.  Not sure he heard me though as he launched into a fairly critical assessment of Theo Walcott.  "He's fucking useless, can't cross, can't shoot and can't tackle all he does is run up and down"  Now he was in full flow and assassinated the entire team, board and manager.  "Still look on the bright side you palmed Nicolas Bendtner off to the Mackems" I comforted him.  A smile broke through his post match rage. "And I thought we had problems" I observed to the Happy Chocker.  Funny old game isn't it?

So it's the big one next week, Brighton away.  We'll need to improve drastically if we are to upset Gus and Casper in their shiny new stadium though.  Don't forget we will get chance to practice against Salford's finest on Tuesday.  Should be a walk in the park after beating them in their own back yard last time out. Delicious!
Can't wait!
MOT

Posted by Andrew Butterwick at 21:11

Guess I should follow this blog hereafter rather than a 'mainstream media' whose bloody bloggers have a largely anti-leeds sentiment. It's difficult to follow stuff from where I am. India.

Aswin,
thanks for the kind comments. Hope I can bring you a taste of West Yorkshire to India.
MOT