When we were Champions and bye bye Billy! 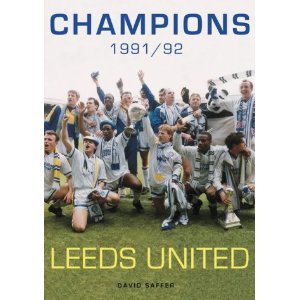 It's twenty long seasons since Leeds United last brought home some silverware to Elland Road.  In what was the last season before the Premier League was born out of Sky TV's millions and changed the English game for good Sgt Wilko's talented team snatched the League title from the Salford Yanks just two seasons after emerging from the old 2nd Division (now the Championship).  Whilst a certain Mr Cantona added some gloss to Wilko's band of brothers it was the stellar midfield of Strachan, McAllister, Speed and Batty who were the heartbeat of a team that suffered only four defeats all season and none of them at fortress Elland Road.  It's difficult to see how a team could get promotion out of the Championship and win the Premier title within two seasons nowadays even if they had a chairman with more money than sense.  On Saturday night the heroes of '92 are guests of honour at a dinner at Elland Road to celebrate their achievement and recognise the last time an English Manager got his hands on the League trophy.  There will be many a misty eye amongst the audience recollecting those halcyon days of the early nineties.

Whilst the team Lord Larry has cobbled together isn't quite in the same stratosphere as the class of '92 the one thing they do have common is their togetherness and team spirit that bonds all successful teams.  This doggedness and "never say die" attitude has already been rewarded with spectacular late goals at West Ham, Brighton and Peterborough that have generated welcome league points deep into Fergietime.  In a division as tight as this year's Championship the difference between success and failure will be wafer thin therefore Leeds ability to compete right up the 96th minute of games is a definite plus for the mighty whites.  Just ask the "Son of the Devil" at Posh!

Yet again we have another strange kick off time this weekend as Cardiff arrive at the Theatre of Hope for a 13.15pm Sunday start? The visitors have had a steady start to the season and sit just one point behind Leeds in 9th spot. In recent seasons the Welsh Lamb Lovers have flirted with Play off finals and automatic promotion spots only to be denied at the death and with their bitter rivals from further up the M4, Swansea, now lording it over them in the Premier League I thought this could be a difficult season for them.  Have they got the confidence to to banish the "nearly team" tag that they have shared with that Bushy team from Nottingham in the recent past?  Well we should get a good indication on Sunday.  There should be plenty of goals in this one though as they have a defence that has allowed 19 goals to fly into their net already this term..............hang on a minute that's the same as us?  So don't bet on a goalless draw.

Finally good luck to Billy Barndoor and his loan move to Brighton.  A slightly strange move given the talent the Seagulls already have up front but you never know he might regain his scoring touch on the south coast.  I just hope he's not allowed to play against us because if he does he's bound to pop a couple of goals in..............he always did for Swindon.

Roll on Sunday then.  Put the Sunday roast on hold and get down to Elland Road to urge the mighty whites on.  Will the Class of 2011 be inspired by the class of '92 and put the Lamb to slaughter?  Will Rachubka continue his good form from Wednesday night?  Will it be another late, late show for the TV cameras? I do hope so.  Guess what?
Can't wait!
MOT

Posted by Andrew Butterwick at 21:59