The clocks went back this weekend as the Championship winning team of 1992 held court at Elland Road to celebrate the 20th season since the Mighty Whites brought home some silverware to LS11.  Whilst they were warmly received by the adoring home fans I just wonder what was going through their minds as they reacquainted themselves with their once familiar surroundings of Elland Road?  It must seem so different and I don't just mean the physical difference of "new" East stand.  The game itself was kicking off on a Sunday lunchtime in front of a half empty stadium with the few away fans that had made the trip from South Wales housed in the West Stand protesting about the high ticket prices and the "over policing" of the match.  Needless to say with this combination of circumstances the atmosphere inside the famous old stadium as the game kicked off was about as flat as a soggy Yorkshire Pudding.

Lord Larry had kept with the starting eleven from Wednesday's frustrating outing at Birmingham.  Optimism was high amongst the Leeds faithful of laying the Cardiff bogey that has prevented a Leeds victory over the Bluebirds since 1984.  The Happy Chocker had wagered on a 3.2 win for Leeds whilst I was favouring 3.1.  Concern still worried the Leeds fans in my earshot over the form of Mr Rachubka.  He needed a good game to quieten the doubters. 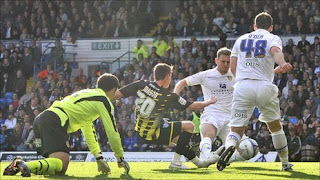 Leeds started on the front foot against a Cardiff side wearing a bizarre away strip that would look better on a rider in the Tour de France.  Ross Mac buzzed around trying to create panic in his erstwhile team mate's defence and only a good covering save by Marshall in the Cardiff goal prevented the perfect start for the Scotsman.  The first ten minutes saw Leeds start to dominate with Clayton, White and Snoddy all looking lively.  From one the first of twelve corners Leeds would force during the game Andy Keogh tested Marshall firmly with a header that had the Leeds faithful out of their seats.  As the clock ticked towards 15 minutes Leeds were looking the more threatening without generating enough excitement to lift the worryingly low crowd of 20,000 out of their Sunday slumbers.  Then just as I was thinking we had made a good solid start disaster struck.  Cardiff hit a hopeful ball over the top of the Leeds defence which O'Dea moved swiftly across to cover but instead of despatching the ball into the East Stand  corporate boxes as he should have done he hesitated and allowed Mason to brush him off the ball and poke the ball home.  The 361 away fans were ecstatic whilst the home fans seethed in silence. 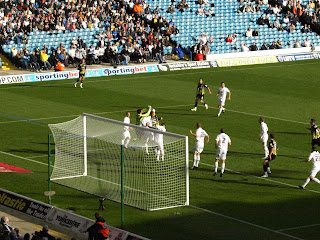 The goal knocked Leeds out of their stride for ten minutes but they soon recovered some composure and began to increase the pressure on the Welsh defence.  This wasn't edge of the seat stuff with the expectation that we would score any minute though.  No this was more very patient build up with the final ball more often than not failing to have the desired quality.  Marshall in the Cardiff goal was kept busy though.  A Connolly through ball crept tantalisingly too far in front of both Keogh and Ross Mac in the box.................Snoddy got to a header at the back post which Marshall flicked by the post for another corner...........Howson went on a typical surging run from midfield only to be denied by a last minute block.  Kisnorbo replaced O'Dea after 30 minutes due to a bang on his head.  Frustration built amongst the fans as the half time whistle went.  1.0 down in a game we should already have been in front.  Not a good half.  The usual debate in the gents confirmed this as mutterings of disappointment about "missing a good Sunday roast for this" took precedent over any positive spin on the first 45 minutes.

The Leeds team returned early, presumably after a roasting from Larry, for the 2nd half passing the team of '92 going the other way after being presented to the fans on the pitch.  "Have you got your boots Gordon?" a hopeful fan shouted to Mr Strachan.  All was not lost though in this game.  We just needed to start converting the chances we were creating...................ooh and staying onside a bit more Mr Snoddgrass and McCormack would help! 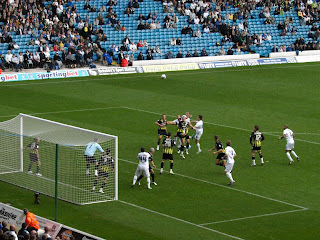 Leeds did start brighter as they pushed to take advantage of a decidedly average Welsh outfit.  Snoddy had a mazy run that ended with a terrific drive that moved in the air and so nearly caught Marshall out but yet again he saved the day for Cardiff.  Ross Mac was the next to be denied as he made space and curled a low shot to Marshall's left only for the annoying Goalie to show impressive agility to turn the ball around for a corner.  I was starting to get really pissed off with Mr Marshall and when Clayton hit another screamer from 30 yards which he tipped over the bar I thought we were destined never to beat him. A fact re-enforced from the resulting corner as the unlikely Howson rose and headed the ball back past the keeper only for him to claw the ball away. Bollox!  Becchio had replaced a subdued Keogh as Leeds pushed on desperate for an equaliser. 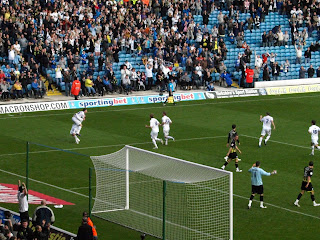 With just under twenty minutes left the patient Leeds pressure finally paid off.  Tom Lees rose elegantly at the back post and nodded the ball back across the box for Snoddy's elongated leg to poke past Marshall and into the Cardiff net.  Relief swept round Elland Road like a double dose of Alka Selzer.  1.1.  Could we go on and win this?  Well within a couple of minutes we should have done as Lees again rose to meet a perfect cross seven yards out only to glance the ball agonisingly past the post.  Lloyd Sam replaced Pugh for the final push.  All the pressure was coming from Leeds now as the game headed for Fergietime.  Frantic attacks were repelled by Cardiff as they hung on for a point whilst at the other end Aidey White bravely headed away a dangerous ball from under his own bar to keep the score level.  i couldn't have coped if that had gone in!   Referee Dowd blew his whistle for the final time and Leeds had to settle for one point when they could and should have had three.  Leeds's have only themselves to blame though.  Too many offsides, too many missed chances and too many wrong decisions for the final ball.  Man of the match by a country mile was Mr Marshall in the Cardiff goal.

So we failed to jump back into the play off places which made for a very quiet journey home.  Plenty of disquiet on the phone ins with Howson taking considerable stick for his below par performance.  The 361 away fans that made the journey would have a happier journey home knowing that despite the high ticket prices and the vigorous policing their side had grabbed a point from a game they were 2nd best in for the  majority of the time.  The draw for me felt a bit like a defeat but onwards and upwards and bring on Blackpool on Wednesday night. We didn't completely slaughter the Welsh Lambs but maybe we can make Blackpool rock in mid week?  One thing for sure.................
Can't wait!
MOT


Posted by Andrew Butterwick at 17:46