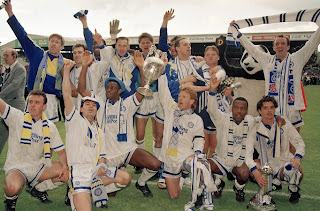 Speed, Strachan, Batty, McAllister, aka The Awesome Foursome, was a midfield that had Leeds fans purring with pleasure when they were in their pomp.  They will be reunited at the Theatre of Hope, albeit one tragically in spirit, before the kick off of our latest Championship tussle with Millwall. Even though it's 20 years since they were strutting their impressive stuff on the way to pipping the Salford Yanks to the title in 91/92 they are still remembered with misty eyes by the Leeds fans who witnessed that inspiring season.  Young Speedo and Batts gorged themselves on the experience and leadership they received from the two wily Scots as they willingly filled the roles of midfield apprentices learning their craft from Masters Strachan and McAllister and at the same time forming the ideal mixture of youth, craft, skills and guile that bonded the mighty whites into a Championship winning team.  With the exception of the fabulous array of midfield talent that adorned the Elland Road pitch during the halcyon Revie era the Awesome Foursome were the most talented collective of midfielders ever to pull on the famous white shirt. 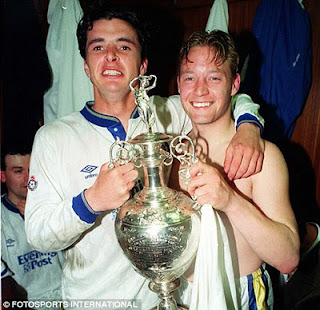 The pre match tribute will be an emotional prelude to what is an important game for Leeds.  Millwall will provide a stiff test for Leeds as they look to build on their impressive away form and break a run of disappointing performances at LS11.  South Bermondsey's finest have had the distinct edge in matches between the two rivals in recent years despite last year's fine 3.1 home win for Leeds so I suspect Lord Larry's will be approaching the game with extreme caution.  The 4.5.1 formation that morphs into 4.2.3.1 when we attack served us so well at the City ground and will almost certainly be used to pick off the Lions.  Howson was back to his best at Forest capping a fine performance with a stunning volleyed goal.  Shorn of the shackles of playing a deep midfield role his natural attacking tendencies shone through as he proudly led his home town team to a famous victory.  The change of formation also seemed to suit the flying flankers, Snoddy and White, and Mr Becchio leading the line with renewed vim and vigour as he relished the physical battle with Wes Morgan.  Even Michael Brown looked like an accomplished midfielder as he perfectly fulfilled the role of holding midfield man and ball winner.............even though his turning circle still seems to be only just smaller than that of HMS Ark Royal! 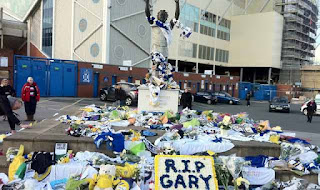 So the extended family of Leeds United will gather for the 2nd time in a week to pay tribute to one of their favourite sons, Gary Speed.  The emotion and sheer passion of the 4,000 fans at the City ground transferred  seamlessly to the team on the pitch and inspired one of the best Leeds performances for a long time on Tuesday.  With a crowd of approaching 30,000 expected for the lunchtime showdown with Millwall it would be nice to see a similar affect lift Leeds to another stellar show.  With only 200 Lions fans travelling North it is an ideal chance for the Leeds faithful to raise the decibel levels to an intimidating high and make this a game to remember..................not just a fitting farewell to Gary Speed but also a tribute to the time when the Awesome Foursome ruled the roost in the top tier of English Football as Leeds United were crowned Champions of England.  Magic!  Predictably.................. guess what?
Can't wait!
MOT
Posted by Andrew Butterwick at 19:40