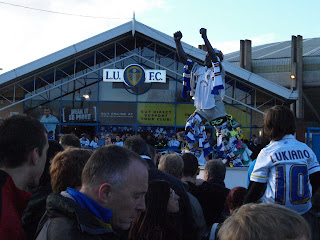 The chilly Yorkshire weather couldn't dampen the spirits of the Leeds fans heading to the Theatre of Hope for this emotional clash with Millwall.  Selby station had more than it's usual number of Leeds fans as the Happy Chocker, the Quiet One and yours truly boarded the Leeds bound train. Could Leeds ride the wave of emotional outpourings in support of Gary Speed and claim a 2nd victory in a traumatic week not just for Leeds fans but the wider football family?  HC expressed his worries over our recent home form but surely with an expected crowd of over 27,000 behind them Leeds wouldn't freeze would they? Well as HC eloquently put it "it wouldn't be the first time if they did"

The mood outside Elland Road was filled with raw emotion.  Hundreds gathered round the impromtu shrine at Billy's statue.  Grown men had tears in their eyes as they paid tribute to one of Leeds' favourite sons at the feet of Billy's famous celebratory stance.  The Forest game was filled with passion and sorrow for such a tragic loss but this was clearly going to be a much larger and more poignant show of love and respect for the former Leeds number eleven.  As planned the remaining three of the Awesome Foursome, Batty, McAllister and Strachan laid wreaths and joined the players in the centre circle in the minutes applause as the Kop sang Speedo's name. I looked around me and tears were flowing from the chiselled faces of hardened fans who had witnessed Speed in his pomp.  The montage of clips played on the big screen of Speed added to the saddness at the loss of such a talent at such a young age. If Tuesday was the funeral today was the Memorial service as the Leeds family along with the few Millwall fans who had endured the outrageous restrictions on them attending the game paid their respects to a Leeds Utd legend.  Sometimes football can cut through even the most fiercest of rivalries.  Gary's widow and sons were in the stand to witness thousands of people they don't know paying homage to their Father and husband.  Hopefully that gave them some strength to cope with their unimaginable grief. 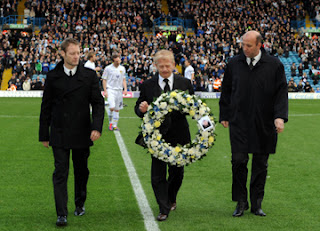 The game kicked off in bright, showery weather.  Lord Larry had stuck with same team and formation that had triumphed at the City ground.  O'Dea and Ross Mac were missing from the bench?   A tribute banner started it's journey round the stadium. Emotion and expectation filled the air.  Could Leeds once again "win for Gary"?  Leeds were attacking the kop and soon had Millwall on the back foot but it was all a bit too rushed and frantic.  Maybe the occasion had pumped too much adrenaline round some Leeds player's veins?  Becchio got his head to a corner but couldn't direct it goalwards then Snoddy weaved his way into the box and after having his first cross blocked chipped a ball to the back post only for the goalie and a last ditch Millwall head to scramble it away.  11 minutes showed on the big screen...............Ooooh Gary, Gary......Gary, Gary Gary, Gary, Gary Speed rung round the famous stadium just as it had on Tuesday and continued for another 11 minutes accompanied by many twirling scarves supporting the #scarvesforspeed tribute. Very moving! 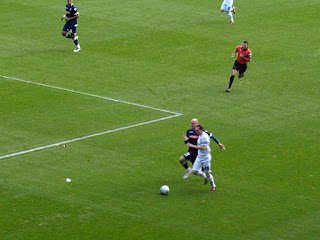 On the pitch the game was becoming disjointed. Millwall were looking to stop Leeds playing and quieten the crowd whereas Leeds' passing just didn't quite have the slickness of Tuesday night.  McCarthy in the Leeds goal showed just why he's been such a hit in his short stay at the Theatre of Hope with a superb save from a Millwall header to keep the score goalless.  At the other end Howson chased a lost cause and clattered into a Millwall defender which left him  in agony on the floor.  "This looks serious" I muttered.  The stretcher was called for but thankfully Capt Fantastic was able to hobble from the field.  Lloyd Sam replaced him as Snoddy dropped into the central attacking role Howson had just vacated.  Snoddy was again having a good game but he didn't have much time to adjust to his new midfield role as Michael Brown was the next to hobble off.  Brown has played well this week but an ankle injury signalled the end to his game.  Keogh replaced him and the formation changed to 4.4.2 with Pugh taking over in centre midfield, White dropping back to full back and Snoddy returning to the wing.  Still with me?  Clearly all the changes disrupted Leeds' rhythm and the first half closed with the game classified as "scrappy to average"

The half time gents debate with the urinal philosophers wasn't that positive.  "Their goalie's not had a save to make" one slightly disillusioned fan wrongly grumbled. "Same old, same old were not quite good enough" another moaned.  Mmmm things weren't exactly going to plan. 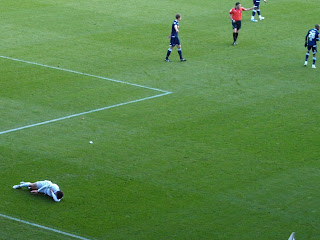 The 2nd half started and soon we appeared to have yet another injury crisis as Lees fell awkwardly after heading a ball clear.  Thankfully he battled on but Leeds were struggling to make their possession hurt the South Londoners.  McCarthy again came to Leeds rescue as he made a solid save from a vicious free kick. On the positive side Pugh's presence in the centre of midfield was beginning to settle Leeds and allow Clayton time to play and with Snoddy picking out Sam time and again on the wing Leeds started to threaten Kenny Jacket's men.  Andy Keogh's silky skills on the ball were complementing Becchio's more robust approach perfectly up front.

Just after the hour Leeds ruthlessly killed off any hope the Lions had of getting a result.  First Clayton burst through from midfield only for Robinson to bring him crashing down 25 yards out.  Step up Snoddy to hit a Speed like free kick into the top corner of the net. 1.0 Leeds.  Within two minutes Snoddy did it again as he met a superb cross from Sam with his head.  2.0 Leeds and game over.  Confidence now oozed through Leeds' play.  Keogh tried an outrageous volleyed lob from 40 yards that so nearly caught the Millwall goalie napping.  Other chances fell to Becchio (how did he miss it?) and then Sam who tested the goalie to his left but for the second game running Leeds closed the game out without any drama.  How unusual is that? 2.0 for Gary Speed belted out from the kop as the referee blew his whistle to bring to an end an emotionally charged victory for the mighty whites. 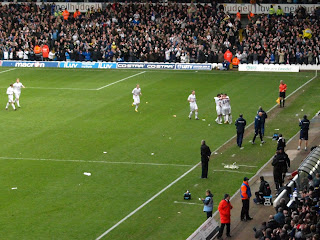 The sharp shower that soaked me as I left the ground also produced the perfect rainbow to wrap round Elland Road.  Was that God paying his own tribute to Mr Speed or was it an indication of the pot of gold available if Leeds keep their promotion push on target?  You decide.

Keogh was terrific when he came on and Pugh strolled around the centre mid field as if he owned it whilst Lloyd Sam showed just why some people think he's a star and some get frustrated when he gives the ball away.  The thing is the injuries that forced the changes to the personnel and the formation probably helped Leeds to win this one because once they had settled Leeds looked a lot more potent in the 2nd half than they did in the first.  A week's a long time in football and certainly after last Saturday's abaration against Barnsley I don't think anyone would have predicted that we would score six goals without reply in the next two games but we did.  The win leaves us nicely placed in 5th spot as we head for Xmas.  I'm sure if Gary Speed was looking down from above he will have been touched by all the tributes today. He's such a sad loss.

Next week we have a trip to Watford to look forward to and with our current away form expectations of another three points will be high. The emotional rollercoaster that is Leeds United is in good health and looking to test their long suffering fans well into the new year and hopefully until spring.  With that in mind I've only one thing to say!
Can't wait.
MOT

Posted by Andrew Butterwick at 17:25