Apparently it's 11 years since we'd tasted victory against our South Yorkshire cousins from Whippetland so even though Dickie Bird's favourites had hit a worse run of form than the mighty whites confidence was not high in the Happy Chocker's car as we headed to Barnsley.  News that Snoddy's appendix had chosen this week to complain and force the Scot into hospital to have it removed had deflated Leeds fans already fragile confidence having watched 3 poor performances on the bounce in recent weeks.  HC couldn't have been more nervous or apprehensive if he was going to a dodgy dentist with a massive toothache.  Working with a cabal of Barnsley fans who have degrees in gloating when their team wins had finally got to him.  "At least they've not got Ranger or Drinkwater this time" I optimistically suggested.  In truth I was as concerned as him.  With Howson, Lees and Snoddy removed from the Leeds starting eleven our strength in depth, or lack of it, was about to be exposed in the white heat of a Yorkshire derby at Oakwell.  Mmmm.........not a day for the faint hearted. 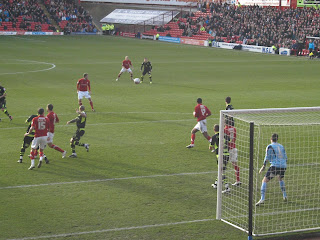 Pre match refreshments were taken in the Joe Johnson snooker club a 10 minute walk from Oakwell. As the only Leeds fans in there we didn't exactly get a warm welcome but we tried to second guess the starting line up with some difficulty.  The big question was who was going to play in midfield?  If we knew the answer was going to be nobody we'd have stopped in the club and drowned our sorrows  but like loyal Lemmings we headed for the proverbial cliffs of the away stand.  When the team news broke we heard that Becchio and Clayton had been dropped in favour of Keogh and Vayrynen with Nunez replacing the convalescing Snoddy on the wing.  "Difficult to see where the creativity is going to come from" I mused to HC.

5,800 Leeds fans had packed the away end in hope of seeing a reversal of recent poor form.  They were about to see the worst performance a Leeds team have given since that horrendous showing at Hereford back in the dark days of Division 3.  Leeds started reasonably well with neat passing releasing Keogh in the Barnsley area but his shot went inches wide..............as it usually does!  Pugh was next to break through some hesitant Barnsley defending and fire a shot past Luke Steele but just past the wrong side of the post.  This lifted the Leeds hordes behind Lonergan's goal.  Maybe we just might break the Barnsley hoodoo at this rate?  Errr sadly no!  On 16 minutes Kisnorbo and O'Dea attempts at stopping Vaz Te came straight from the script of a Laurel & Hardy film as the Barnsley striker gratefully accepted their festive generosity and slotted the ball past a helpless Lonergan.  1.0 Barnsley. Bollox.  HC's pre match predictions of doom and gloom were starting to turn into reality as the Barnsley fans danced with delight in the stand adjacent to the Leeds fans. 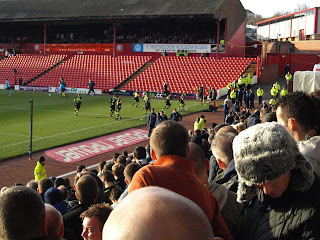 Leeds huffed and puffed to try and get the equaliser but apart from a couple of long range Nunez shots and a goal mouth scramble we never really looked like scoring. All Barnsley were doing was playing simple passing Football and they were making Leeds look distinctly 2nd best.  In the end Leeds were lucky to go in at half time just the one goal down after Davies fluffed a decent chance to increase the home side's lead.  The Leeds players left the field to well deserved boo's and chants of "Bates out" ringing in their ears.  The fans were revolting with good cause.  Dickie Bird was introduced at half time after been awarded an OBE in the New Year's honours list receiving a warm ovation from all four sides of the ground.  He even dribbled the ball back towards the half way after saluting the Leeds fans.  Inevitably strains of "sign him up, sign him up" drifted from the long suffering whites fans.

If Leeds were to rescue anything from this game they needed an early goal.  Lord Larry gave his team a final bout of sprinting to liven them up before the 2nd half kicked off.  It didn't work. Within 6 minutes Vaz Te killed off any chance of a Leeds fightback with his second goal.  Even he must have been surprised with the vast emptiness he found himself in from a corner but he steadied himself and put the chance away with ease. Leeds were dead and buried.  Vaz Te ran back to the half way smelling under his arms.  Did he have raging BO? Is that why no Leeds player went near him?  The rest of the half was just one long embarrassment as Barnsley toyed with Leeds like a well fed Cat teases with his final mouse.  Davies rattled in a 3rd through more non existent defending before Vaz Te completed his hat trick with 18 painful minutes left on the clock.  Leeds devoid of any passion, skill or ideas went through the motions as Barnsley eased up.  Yes Becchio pulled one back for Leeds in added time but I had long since gone.  The pain of watching a gutless, pathetic showing from the once mighty whites was too much for me to stomach.

This was as dire performance as I have seen from a Leeds team in a long time.  Yes we were without Lees, Snoddy and Howson but the very least you expect from a Leeds team is to play with some passion and effort.  I saw none of that today from the men in black.  Michael Brown was probably the best Leeds player.  That's how bad it was!  Barnsley even lost their star man, Butterfield, after 15 minutes or it could have been worse.  His replacement Vaz Te didn't do a bad job though.

Listening to Lord Larry's radio interview on the way home he came out fighting declaring that certain players had played their last game for Leeds after that performance.  After four shocking performances by Leeds on the bounce and a team sadly devoid of any confidence or motivation it could well be Simon's last game in charge.  It's the first time I've heard chants of "Grayson out" coming from the Leeds crowd and after all they are his team of players he's brought into the club and if he can't get them up for a match like this we're in deep, deep trouble.

48 hours until the next game against high flying Burnley.  Something drastic is needed or we could be in for another embarrassing afternoon.  So we finish 2011 on the lowest of the low playing badly with no confidence and little passion.  As the song goes "Things can only get better"  I do hope so.........
Can't wait!
MOT & a Happy New Year to all long suffering Leeds fans.

Posted by Andrew Butterwick at 08:50

I love reading your blog. I opted to go to the pictures with my wife this afternoon, after suffering Reading and Derby, think I made a wise choice!

Good call Richard! Hope the film was a good one.
MOT

Getting worse, I feel. Snoddy is way too important, yes, but even with Snodgrass, Lees and Howson back, this doesn't look like a team that mounts a promotion challenge.

We must weather some more of this for a while. I just hope it isn't too long.