A chill wind was blowing through Selby station as the Leeds faithful boarded the train for the mighty whites 2nd game in 3 days.  With the debate raging over how secure Simon Grayson's position is there were plenty of opinions on the rights and wrongs of Lord Larry's management of the club.  The consensus view was this would be his first and last game in charge of Leeds United in 2012.  News of the team selection was always going to be surprising given the number of players nowhere near their best form.  In the end Thompson, Bruce, Becchio & Clayton returned to the team along with new loan signing Andros Townsend.  Although some of the doom and gloom had lifted slightly since our embarrassment at Oakwell there weren't too many fans anticipating anything other than another "difficult" afternoon following the mighty whites.

A good crowd of over 27,000 had braved the chilly weather and awful form to watch the game.  I suspect there were a lot of Xmas present tickets amongst the crowd though because if the tickets only went on sale after the Barnsley match we'd be lucky to have had 5,000 watching.  So with a heady mix of foreboding, worry and the slightest smidgen of hope I settled down to watch the game.  Zac Thompson was flung into a central midfield role with Townsend, a left winger, playing on the right wing and Alex Bruce filling in at right back.  No Tom Lees (still suffering from concussion) or Keogh and Connolly who presumably were two of the players Lord Larry was referring to in his post Barnsley rant?  Ross Mac was on the bench along with McCarthy, Sam, Forssell and Brown. 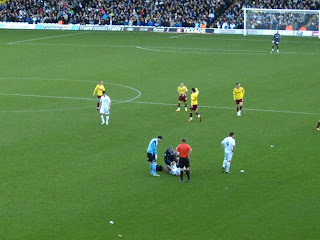 The game kicked off and Leeds made a bright start keeping the ball on the deck and passing with a modicum of confidence.  Charlie Austin should have put the visitors ahead though when he passed up a golden chance and blazed his shot high and wide with only Lonergan to beat after just 4 minutes. At least 20,000 heads were shaking in the ground as once again Leeds became their own worst enemy in giving up possession at inopportune moments.  Lord Larry was pacing the technical area nervously with all the demeanour of a condemned man and that chance couldn't have done anything for his nerves.  Leeds were playing with a bit more conviction than Saturday though and the introduction of Townsend added some much needed pace to the attack, even though he was on his wrong wing!  Then in the 16th minute came the key moment of the match. In an inspired moment of tactical genius Lord Larry saw Kisnorbo clatter into a challenge leaving him clutching his knee in dire pain.  Clearly he couldn't continue but  who would replace him?  There were no defenders on the bench................ so Thompson went to right back releasing Bruce to play centre half and Pugh to move in from the left wing to take Thompson's centre midfield spot.  Townsend went to his natural left wing spot and Sam took his place on the right wing............got it?  All of a sudden Leeds looked a more balanced team.  Nice one Larry.  Townsend got more and more of the ball and his willingness to run at defenders not only caused mayhem in the Clarets defence but also a warm glow of appreciation amongst the crowd.

Lonergan still had to be on his toes though as Austin fired in a looping shot that he tipped over the bar but it was Leeds who were getting the upper hand and they were doing it by playing the ball on the floor! Townsend continued to look bright on the left flank and fired a long shot wide of the Burnley post.  This was a much needed improvement from Saturday.  On 22 minutes Trippier lived up to his name and tripped Townsend as he flew past him earning him a yellow card and when he fouled Becchio ten minutes later he made it a pair of yellows which meant an early bath for the protesting Claret.  The Burnley fans were not amused but I & 25,000 other fans were! 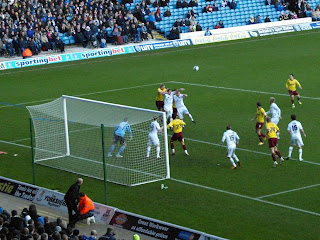 Now as any long suffering Leeds fan knows we never beat teams with ten men so I knew this game was far from over.  Thompson had adapted to the right back role well and Bruce was contradicting most people's perception of his skills by looking commanding in the centre of defence especially when he carried the ball into the empty spaces Burnley allowed as they funnelled back behind the ball.  I was beginning to get ever so slightly hopeful of a much needed victory.  Leeds ended the half on a high as an enterprising run from Pugh was halted on the edge of the box by another Burnley foul.  Nunez clipped the ball into the wall and away for a corner.  Half time 0.0.

Lord Larry must have been pleased with the first 45 minutes although Burnley probably had the better chances Leeds had had the better of possession and also his new signing, Townsend, was starting to show his pace and attacking skills on the left flank.  Larry might have the tag of a "deadman walking" but on the first half showing Leeds were well placed to go on and claim three precious points.

Leeds started the second 45 minutes on fire as they forced a number of corners in front of the baying Kop.  This was Elland Road at its best.  Leeds attacking the kop end and shots raining in on the goal.  O'Dea went close with a header, Sam fired close and then Thompson smacked a superb 25 yarder that was literally inches the wrong side of the post.  A goal is coming HC advised knowingly and I nodded in total agreement.  It was only a matter of time.  Leeds continued to press for the all important first goal as Lord Larry nervously watched on.  Then disaster struck. A simple ball into the Leeds box was weakly headed clear straight to Dean Marney who placed the perfect ball to Austin who slotted a sweet shot past Lonergan.  1.0 Burnley and the travelling fans were in dreamland as their 10 man team defied the odds to take the lead.  Lord Larry looked a lonely figure stood in the technical area. 1.0 down to ten men on the back of the poor run over Xmas did not bode well for his future at Leeds.

He acted quickly and replaced the misfiring Becchio with Forssell and soon to be followed by Ross Mac replacing Nunez as Leeds went in search of a desperate equaliser.  15 minutes left and although Leeds were piling forward an air of desperation crept into their play.  Opportunities to play the ball on the floor were spurned in favour of getting the ball forward as Burnley manned the ramparts to repel Leeds' final onslaught.  The clock ticked past 80 minutes and despite all the play now taking place in the Burnley half a goal didn't look likely.  I imagined a dark circle of vultures circling over the unfortunate Lord Larry as he urged his team forward looking for a goal that might just save his job. Townsend was still creating havoc and putting good crosses in but all to no avail.  Three minutes left and things were looking desperate.  Yet another corner to Leeds.  Clayton took the corner right footed and what was an awful corner turned into a gem as Easton unluckily turned the ball into his own net from 6 yards.  The Theatre of forlorn Hope suddenly exploded into the Theatre of renewed Hope silencing the prematurely celebrating Burnley fans. Two minutes of normal time plus five minutes of added time were left in this intriguing contest.  We couldn't snatch a winner as we did at Turf Moor earlier in the season could we?  Suddenly the vultures were retreating to wait on the East Stand roof. 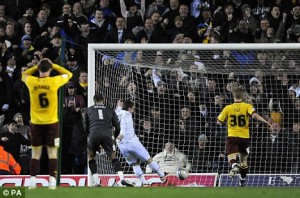 Burnley's 10 man herculean defensive efforts had taken their toll as the clock ticked onto 90 minutes.  Sam controlled the ball on the edge of the box and hit a rasping drive that the goalie just tipped round the post .............for a goal kick?  The Leeds crowd were enraged and when the goalie rubbed salt into Leeds wounds by wasting time with the goal kick he received a yellow card. Time ticked by and as I anxiously glanced at the referee fearing he was about to blow his whistle Townsend once again attacked the Burnley defence...............he jinked inside onto his right foot and hit a stinging shot goalwards..........Grant in the Burnley goal couldn't hold the shot and out of the melee that followed came the majestic Ross Mac with the ball and smashed the ball gleefully into the net.  Get iiiiiiiiiiiiiiiiiiiiiiiiiiiiiiiiiiiiiiiiiiiiiiiiiiiiiiiiiiiiiiiiiiiin you beauty!  Elland Road exploded in unbridled joy in a level of celebration not seen since that certain Beckford goal against Bristol Rovers.  The vultures took flight and an ecstatic Lord Larry punched the air in delight.  Leeds had won it at the death.  The final whistle followed seconds after the restart to signal three precious points for Leeds which puts them a mere point outside the play off positions. Unbelievable Jeff!

Smiling faces adorned the Leeds fans as they streamed away from the game for the first time since early December.  Leeds had dominated possession but struggled to shake off a tenacious Burnley side.  This was not a perfect performance but the changes to the side, some forced and some selected, had gelled together into a much better unit than in recent weeks.  Townsend had a terrific debut and the possibility of seeing him in tandem with Snoddy on the opposite wing is mouth watering to say the least.  Zac Thompson showed his undoubted potential and even Alex Bruce performed well.  Clayton was much more effective today although he was lucky to get no more than a telling off for a swinging arm into the face of a Burnley player late in the game.  So the headline writers must put their obituaries for Simon Grayson back in the draw for another week as Leeds look forward to a trip to the Emirates in the cup.

There is no better feeling than a late, late winner and the Leeds fans gratefully feasted on Ross Mac's late strike but let's not get carried away.  There is still a lot of work to do on this team if we are to seriously challenge for a top six spot.  Today was a good start though.  2012 promises to be an interesting year on Planet Leeds.  Up to now we're unbeaten this year let's see how long we can keep it going.  One thing for sure...................
Can't wait.
MOT.

Posted by Andrew Butterwick at 21:45