Winter was here with a vengeance with the thermometer hovering around -7' as we boarded the train at Selby. Even the Quiet One had two coats on to keep out the winter chill.  Would the game be still on?  Bristol's groundsmen had been working overtime to get the game on we were told but there was still this nagging doubt that we could be embarking on the long trip to the west country for nothing.  Justin joined us at Leeds amazingly dressed with just his Leeds away top and scarf to keep out the biting cold and swirling snow. Something told me he might regret his sartorial decision before the end of the day? 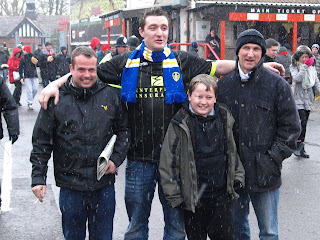 The journey to the South West flew by helped by a couple of quizzes and plenty of speculation about the identity of the new Leeds manager.  The Happy Chocker was convinced if we won today Redfearn would get the job until the end of the season whereas I still think Kenneth will bring someone in with experience to try and give Leeds the boost they need if there are to flirt with the play offs.  Pre match refreshments were taken in Wetherspoons where Leeds Gary joined us to try and dissect the events of the last week.  Confidence was not high ahead of this important clash with the exception of Justin who predicted a 4.1 win to Leeds.  Clearly the freezing cold and the permanent goosebumps he was sporting had affected his brain.

Neil Redfearn's first team sheet didn't contain many surprises.  Pugh returned to full back whilst White took Townsend's wide berth.  Adam Smith made his debut at right back. Other than that it was the same as Tuesday night.  The snow was doing it's best to fall as we made our way to the ground.  Justin's attire or more to the point lack of it attracted amusing attention from the majority of other fans all wrapped up to keep out the cold. 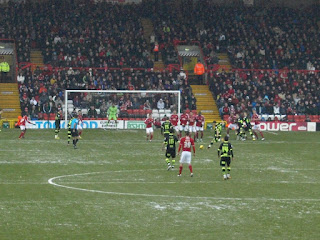 The game kicked off with the snow still threatening to spoil the game.  The restricted following of 1,900 fans were in no mood for reconciliation with Capt Birdseye as the well worn chant of "Bates Out" from the morons and nutters of Leeds pierced the Bristol air. The snowy conditions and slippy surface made for a scrappy opening with the ref's whistle almost constantly blowing for free kicks as players from both sides struggled to adjust to the wintry conditions.  Leeds' first chance came in the first three minutes, inevitably from a free kick, but Snoddy lifted the ball over David James' bar from 20 yards out.  Bristol looked the more dangerous team going forward in the first twenty minutes though with Leeds's play looking dis-jointed and lacking in confidence.  The weeks off the field activities certainly didn't seem to have had a positive impact on the men with the glow in the dark shirts on.

Lonergan made a superb save low to his left to keep out a vicious Bristol shot and followed that up with a succession of well handled saves on a surface that was a keeper's nightmare. The clock showed 30 minutes gone and both Clayton and Snoddy had found their way into the ref's book.  Debutant Adam Smith was beginning to settle after a difficult start though as his probing forward runs began to test both the skill and the judgement of the Bristol defenders. Ex Leeds favourite Neil Kilkenny was enjoying tormenting Leeds as he scuttled about pulling the home sides strings creating most of the chances for the team in red.  The game as a spectacle was in the category of poor to unforgettable though as half time loomed.  Any hopes the long suffering Leeds fans had that somehow promoting the youth team coach to replace Simon Grayson would galvanise the team into the championship's version of Barcalona were a million miles off the mark. 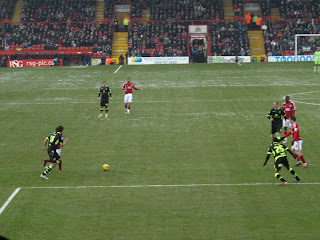 Then out of the gloom came a moment of simple magic that changed the game.  Leeds were pressing down the left as Clayton fought and recovered the ball deep in the Bristol half.  Danny Pugh had made a run beyond the home full back and Clayton picked him out with a left footed chipped ball just as if he'd used a sand wedge.  Pugh controlled the ball just inside the box laid it back to McCormack who then found Snoddy unmarked on the very spot he scored from last year..............this time the Scot didn't need to pirouette and dance past defenders he just calmly passed the ball past a helpless James and into the net. Simples! 1.0 Leeds.

The fans celebration was a mixture of relief and surprise with what I counted as Leeds first shot on target.  Leeds' play was transformed.  Leeds were suddenly mimicking Superman.  The goal was their quick change  in the phone box and now they playing like they were going to save the world.............well Leeds' world at least! Soon Ross Mac was hurtling towards David James after a sweet ball released him beyond the Bristol defence.  James Wilson's clumsy challenge earned him a straight red reducing the Robins to ten men.  We do seem to like playing against ten men lately.  The free kick went tamely into the wall before Kilkenny so nearly upset his old team mates as he latched onto a cross to steer the ball inches wide.  The half time whistle  blew and Leeds headed for the tunnel one up.  Strange game football.............on Tuesday Leeds had played some of their best football in the first 45 minutes and went in level and were about to get a good spanking whilst here we had played poorly for 35 minutes and yet come off one up and very much on the front foot.  HC was beaming convinced that this will get Redfearn the job.  Meanwhile the caretaker manager was delivering his first half time pep talk to a team who were a goal to the good playing against ten men.  With the snowy weather outside I bet he thought it was Xmas?

Leeds were now playing towards their fans and played sensibly as they stretched Bristol from flank to flank albeit at a very pedestrian pace. The two full backs were now pushing on and Adam Smith was starting to enjoy himself as he tormented the Bristol left side and Bolasie in particular.  On 54 minutes he drew a foul & a yellow card for Mr Bolasie as he skipped past him and the unfortunate Bolasie earned a second yellow just two minutes later as he bundled Smith to the floor as he left him trailing in his wake.  The yellows changed to red as Bolasie joined Wilson in the dressing room.  Much as he protested I suspect a part of him was pleased he had been relieved of the duty of chasing Mr Smith up and down the wing in the awful weather?

Bristol were now down to nine men and Leeds took complete control of the game with Delph, Smith and Snoddy tormenting the Bristolians as they made good use of the space available.  Snoddy had the crowd drooling as he weaved past three defenders and rasped a shot goalwards that James did well to save.  Leeds Gary rightly compared the run with Eddie Gray's famous goal against Burnley all those years ago. For all our dominance it was still only one nil and nerves jangled each time Bristol made it out of their own half.  Ross Mac did have the ball in the net three times in the 2nd half all of them chalked off for offside though.  The inevitable second and calming goal came on 78 minutes though as the incessant pressure told.  Once again it was Clayton's pitching wedge that created the chance for Ross Mac who expertly controlled the ball and finished with class sealing the game for the mighty whites.  Becchio finished the job with a third just before the end as he smashed the ball into the roof of the net.  3.0 Leeds and a great start for Redfearn's Leeds managerial career.

Delph and Becchio threw their shirts to the adoring Leeds fans at the final whistle in appreciation of another show of fantastic support  in appalling weather. A lusty chorus of Marching on Together assaulted the cold Bristol air.  All was good with the world.

Many people will see this as the classic "new manager" boost inspiring a win for a struggling team.  Leeds certainly played with some confidence in the 2nd half but let's not get this out of context.  Bristol were down to nine men and up to Leeds scoring the first goal we looked anything but revitalised but all's well that ends well.  I am sure Capt Birdseye will have already written part of his programme notes for next week though?  "See I told all you morons/nutters Grayson wasn't getting the best out of the players that's why I sacked him"  Mmmm one cold day in Bristol doesn't maketh a recovery Kenneth me thinks?

Adam Smith had a very promising debut looking exciting going forward and after a shaky start solid in defence. Delph revelled in the space he had in midfield although I think sometimes he thinks still playing with Premier League players with some of the ambitious passes he tries?  Ross Mac again looked a class act whilst Clayton flitted in and out of the game but when he was in the game he made some telling passes not least for two of the goals.  Becchio struggled again and with the threadbare back up in that area continues to be a concern to this fan.  Snoddy was superb yet again.  His weaving run and shot was right out of the top draw as he gets better with every game.  He really is Premier League class.

Our journey home through the snow back to North Yorkshire was relatively easy letting the train take the strain.  It made for an "interesting" hour when a crowd of Barnsley fans joined us at Birmingham on their way back from Watford.  Cue a singing contest between the two sets of Yorkshire fans that flitted from amusing banter to bordering on violent conflict but thankfully convenial relations were maintained.....Tha know's!

So will this victory be enough to get Redfearn an interview for the job?  I don't thinks so but HC does.  Apparently Dave Jones is now favourite for the job........well at least today he is!  Brighton at home next up for Leeds.  I suspect by then Neil Redfearn will have stepped down with his 100% win record intact.  A win against our open minded, sexually liberated friends from the land of the stony beach will be more than welcome.
Can't wait.
MOT
PS Thanks to Dean Haith for the vid.

Posted by Andrew Butterwick at 10:09