That was the week that was! 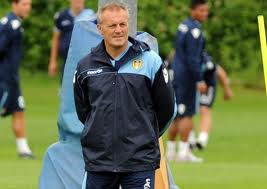 After the surreal defeat to Birmingham and the subsequent sacking of Lord Larry the speculation has been rife on exactly who will be next to take up the managerial hot seat at the Theatre of No Ambition. First it's Warnock then Clark......... but wait a minute Ince is in the frame......... no he's not.........neither is Poyet.......could it be Bruce or even Di Matteo or was that Di Canio? Even mad dog Keane could be coming to LS11 and so the conjecture goes on.  Yes the 24 hour rolling sports news need copy to fill their news slots and the social media sites can soon throw a new name into the pot at the flick of a click but the merry go round of different "candidates" who are possibilities for the vacant Leeds job is seemingly endless.  In the meantime caretaker manager Neil Redfearn has stepped up from looking after the youth and the ressies to take charge of the mighty whites for the trip to Bristol.

Will he keep the same formation?  What will his team selection be like?  Surely he will make some changes to the personnel?  Will Billy Barndoor get a run in place of the mis-firing Becchio?  Will Zac Thompson move into midfield?  Who will he play at right back? Will Connolly come back into the fold? Will he inspire the team or will there be a backlash to the departure of Larry? The Bristol game is an important game in Leeds' season.  Another defeat will oil the slippery slope to the wrong end of the table whilst a victory at Ashton Gate will banish some of the worries brought on by the worrying form we've had to endure since late November.  In some quarters there is a view that Neil Redfearn could end up with the job until the end of the season.  Personally I can't see that but if he can, in the words of our chairman' "get more out of the squad" than Larry did then his credibility will rise very quickly.

So what is the likely outcome at Bristol?  Anybody's guess but the eleven that start need to show the long suffering fans that they have some heart and bottle after the midweek defeat.  If not and the sour taste of defeat is once again on our lips come Saturday teatime then a chorus of "What the f*** is going on" will be heard in Bristol and with good reason.

In 1972, the year Leeds Utd last won the FA Cup, Johnny Nash had a hit in the UK with the song "There are more questions than answers" it seems such an appropriate tune for the current goings on at Elland Road lately?  Up early in the morning then for the train to Bristol.  The usual pre match excitement will be mixed with lots of debate over where we go from here.  I do hope one of the answers is to take three points back to Leeds?
Can't wait.
MOT

Posted by Andrew Butterwick at 21:43