The "no surprise" surprise?

In the end the news that Capt Birdseye had wielded the managerial axe on Simon Grayson's head after last night's defeat to Brum came as a surprise to most Leeds fans......................but it wasn't a surprise if you know what I mean?  Lord Larry had seemingly been a dead man walking for the last few weeks but the height of the speculation naturally came at the start of the transfer window.  Sacking your manager the very day after the transfer window slams shut and with it the opportunity to bring fresh blood in is certainly a unique approach.  But don't worry the Senior management team at the "Theatre of no ambition" know what they're doing as shown by the following statement on the sacking of Simon Grayson: "We have 18 games to go this season and are still within touching distance of the Play-Offs, but felt with the transfer window now closed we needed to make the change at this time in the belief that a new managerial team will be able to get more out of the existing squad of players and make the difference."   I know I am merely a moronic fan but can someone please explain how "waiting until the transfer window is closed" is the right time to make the change?  Who has made the call on judging the full potential of the squad and the fact that SG and his team aren't getting enough out of them?  Shaun Harvey ex-postman, insurance man and one time admin clerk at Farsley Celtic?  Let's assume his judgement is right though and Larry has lost the plot where is the logic in waiting until the end of the window to get rid.......unless of course you didn't want to have that "difficult" discussion with the new manager over how much money he's got to spend? 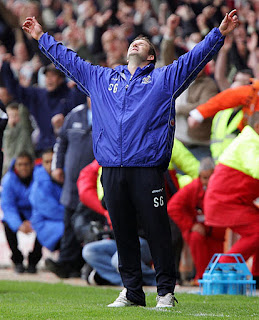 Much as I think Simon Grayson has done a good job during his time at Leeds I do think he has exhausted all of his ideas, tactics and motivation of the team to make that next step up into true promotion challengers.  Yes the "support" from the chairman and the board has been nothing short of obstructive but that shouldn't mask the tell tale signs of a man at the end of his tether.  The tinkering with the side, not really clear what his best side is and some unfathomable substitution decisions.  Simon will be remembered fondly by the Leeds hordes for his achievements under very difficult conditions.  Promotion from Div 3, famous cup exploits against the Salford Yanks, Spurs, Arsenal and Liverpool together with a barnstorming first season back in the championship.  His win ratio whilst in charge at Leeds is a very healthy 49% and with those facts on his CV he wont be drawing the dole for very long.  All in all I think he's done a fantastic job for Leeds but all good things come to an end.  The king is dead long live the king! 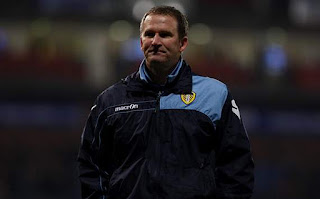 So who will replace Larry? Hopefully somebody who knows how to build a team from the back and plug the leak in the Leeds defence that has been dripping for at least 4 years without anybody bothering to fix it.  Neil Warnock appears to be favourite.  If he does get the job he could well create the ultimate axis of evil in Football terms with Capt Birdseye but he does have a good record at getting teams promoted.....and without significant resources.  Mick McCarthy is another one who is in the frame but would the bearded one want to pay compensation? I doubt it.  Di Matteo has also been mentioned along with Roy Keane and Steve Bruce?  Whoever comes along though is in a bit of a "can't lose" situation as he will have limited opportunity to bring players in other than the famous emergency loan window so he will always have the "it's not my team" excuse.  Sadly this is yet another day when the football world are looking at Leeds United and wondering what the hell is going on.  Unfortunately I get the feeling that we will have plenty more such days whilst Capt Birdseye remains at the helm.

So farewell Simon good luck in your next job and a massive thanks for the good things you brought to Leeds especially that win on Jan 3rd.  To the new guy coming in good luck you're going to need it.  There is a rarefied atmosphere on Planet Leeds where nothing is quite what it seems.  Don't suppose Ian Holloway would be interested would he?  Seat belts and harnesses tightened more turbulence ahead me thinks?
Can't wait.
MOT

Posted by Andrew Butterwick at 21:49

It also coincides with the end of the early renewals. Anybody gaining renewed hope from a new management team who didn't renew early will now have to pay more.

Kerry,
interesting point. I think the lack of renewals will have come into Monaco Ken's thinking in bringing a new face in to freshen up the team and get the season back on track. Pity he doesn't think from a football perspective once in a while.
MOT

Bates and Co haven't a clue how to run a football club, and the sacking of SG yesterday was a sad day for Leeds.
It was obvious by Bates comments SG was on borrowed time and in that case he should have gone after Xmas to give the new man a chance of making his mark on the team.

The problem as I see it, is finding an experienced manager who will work under Bates and his spending and wage caps. I hope I'm wrong but i can see us dropping down the Championship like a brick instead of challenging for the playoffs

just wanna say been reading your post for years from down under Australia . I rely heavily on your game day review as i only listen to the games on LUTV, and thoroughly enjoy it. I went and experienced Elland Road 2 and half years ago when we were in league 1 and loved it . Anyway i think Bates is ridding us all and is laughing at how his own bank account is rising at our expense. People said how stupid i was going all the way from Australia just to watch league 1 , but i love Leeds and even though it cost me $7000.00 for the 2 week trip i would do it again , thats why this prick has got us by the balls , we love Leeds but Bates is in the way. see ya champ foreverleeds. William

Leedsmad78,
Thanks for the comments and keep spreading the word down under. Don't forget though Leeds United is an addiction for which there is no cure!
MOT