A cold, blustery wind blew down Elland Road as we walked towards the Theatre of Renewed Hope.  The Happy Chocker and brother Chris were in attendance for the latest of Leeds' games at the former fortress known as Elland Road.  The atmosphere in the Captains Lounge before the game was subdued.  Clearly Mr Warnock's hope for a 30,000 crowd was way off the mark and the reality of having to win 6 of the last 7 games was not lost on the die hard faithful fans.  This was a monumental task. 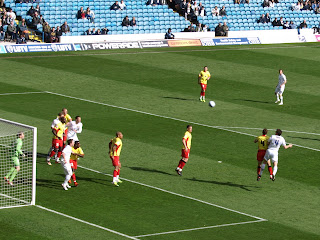 What we needed was a good, positive start.  What we got was a disaster.  The experienced Paul Robinson made a schoolboy error and lost the ball to Troy Deeney near the half way line.  Deeney advanced towards the Leeds box before slotting a ball to Iwelumo who ghosted across the box unmarked to fire past Lonnergan.  1.0 Watford with only 6 minutes on the clock.  That familiar sinking feeling that is endemic in Leeds fans started to take hold of my stomach and we hadn't even had a shot on goal.  This didn't look good.  Watford are a big hard working, physical team with no shortage of pace a potent blend for any team playing Leeds.  Leeds response to the goal was more of a splutter than a stampede as they struggled to play with any sort of co-ordination or fluency.  Their best chance in the first 30 minutes was from an Alex Bruce header that looped harmlessly over the bar.  The pre match talk of hopefully gatecrashing the play off's looked about as likely as George Galloway winning the prize for the most diplomatic MP of the year. The uninspiring play on the pitch took it's toll on the crowd as once again the atmosphere in the stands took a nose dive in line with the distinct lack of entertainment on the pitch. 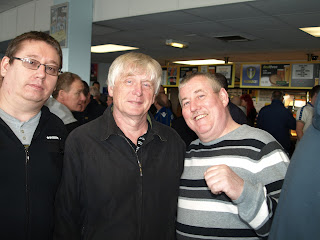 Leeds players seemed unable to pass to another player constantly taking the easy option of the long hopeful ball towards Becchio who would back into the centre half and fall over.  The one bright spot of the first half was a shot from Snoddy that just crept wide of the post but just on half time Lonners came to Leeds rescue as Deeney hit a powerful shot goalwards.  Deflated doesn't even begin to describe the mood as I headed for the halt time urinal debate.  "Clueless and hopeless" was one view.  "Just as bad as when Grayson was here" was another and "They're all fucking shite" probably summed up the general feeling as copious amounts of pre match dutch courage was dispensed into the white ceramic urinals.  The most exciting thing of the first 45 minutes was meeting Nelly's brother who was over from Canada.

Still we were only a goal down and if we could lift the tempo in the 2nd half you never know................well actually we do know.  Leeds stuttered and spluttered as they tried to put some cohesive passing together but the now familiar lack of confidence and quality that seems to be sadly lacking at ER was shining brightly through.  Webber had replaced White and added a little more spark but in truth we were watching the final embers of Leeds' season slowly burning out with no real attempt to re-ignite Leeds' fire.  This was painful.  Snoddy should have scored when he followed up a Bruce header as should Deeney when he pounced on another mistake in midfield to streak away towards the goal.  Somehow Lonners and Bruce got back to deny Watford a second goal. But that just prolonged the agony as yet more powder puff defending allowed Iwelumo to bag his second on 90 minutes.  There was still time for Connolly to pick up a red card for a stupid challenge as another home game ended with fed up Leeds fans streaming away from the ground early. 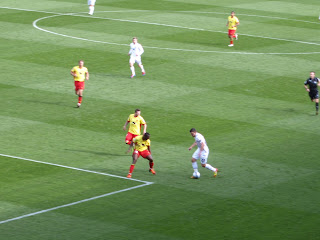 This was an awful performance from a team who seem to be ready for their summer holidays early.  The 21,000 masochists who turned up for the game were sold short by a poor Leeds team who have very little quality in their ranks.  Nothing short of wholesale changes will resolve this over the summer.  Other than Snoddy and Ross Mac anybody can be sold in my opinion.  If Capt Birdseye had any decency he would refund everybody's ticket money from today's game.  We were awful.  The only positive out of today is there are only six games left in this frustrating season.

Reading next up on Good Friday.  God knows what to expect there?


Leeds v Watford by Super_chris
Posted by Andrew Butterwick at 18:46