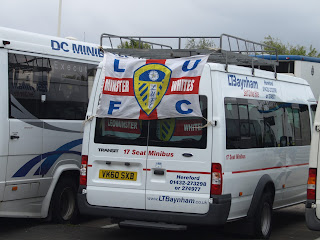 A season that seemed to offer an excellent opportunity to challenge for promotion back in August drew to a low key close with a meaningless home game against Leicester City. The last chance to witness the inadequacies of the current Leeds squad had added an extra couple of thousand to the crowd on a miserably cold wet afternoon at the Theatre of Lost Hope.  As ever the Happy Chocker, Quiet One and yours truly had made the trip from Selby on a packed train.  April 28th must be the "Super Saturday" for hen parties as everywhere I turned there seemed to be a gaggle of Hens bedecked in various degrees of tasteful outfits. Against a background of popping corks and incessant girly chatter we reflected on the Last of the Season Wine.

A vintage it certainly wasn't. By the end of November we had clawed our way into the play off spots despite taking a five goal hammering from Blackpool at home and also losing to Barnsley the next time out at ER.  Back up keeper Paul Rachubka was inspirational in this dip in form with glaring errors in games against Coventry, Peterborough and Blackpool leading to his exile on loan to Tranmere.  Hope springs eternal though amongst Leeds fans and when we hammered Forest 4.0 at the City ground in the "Gary Speed" match every thing seemed to be back on track.  Fast forward two excruciatingly depressing months and we were sat in 10th place in the league having lost both our Captain, Jonny Howson, and Manager Simon Grayson.  The vintage of 2012 had serious problems and was slowly turning to vinegar.  When the new messiah, Neil Warnock, arrived to take over the reins from stand in Neil Redfearn he soon grasped the enormity of the task as he witnessed a very fortunate win against Doncaster. With the transfer window firmly shut the fermentation process on the existing crop of Leeds' grapes was too far gone for Warnock to transform into something with a Play Off bouquet. 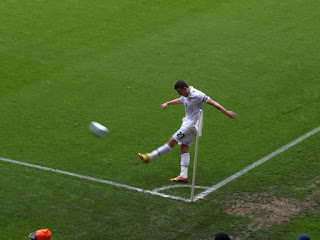 Brown and Connolly returned to the line up to face a Leicester team with Beckford and Schmeichel returning to their old stamping ground. Beckford still has a place in the hearts of most Leeds fans and he cemented that position further as he acknowledged the kop with not only the Leeds salute but an attempt to swap shirts with Bruce at a Leicester corner. Cue an ear shattering rendition of his song about that goal at the scum shit hole.  Nigel Pearson didn't look a happy bunny in the technical area though as his star striker played up to the opposition fans.

Leeds had started brightly and Snoddy tested Schmeichel with a neat half volley after pouncing on a ball over the top of the blues defence. Leeds should have been one up minutes later when Becchio evaded the flailing Leicester defence only to tamely chip the ball straight into his former team mate's hands. Ross Mac also went close after a teasing run by Snoddy.  Maybe this was going to be a positive end to a frustrating season? Well no as it happens.  The first half became a tussle between two teams who knew their season was over and it showed in everything they did.  The monsoon type rain reflected the mood of the match. Then on 40 minutes Leeds conceded a goal that perfectly summed up their season.  A sliced clearance was totally misjudged by Pugh at left back who then attempted a flying clearance leaving him prostrate on the turf watching Waghorn gleefully sprint away and roll the ball past the helpless Lonergan. 1.0 to Leicester and Leeds were heading for a record 11th defeat at the Theatre of Lost Hope.

Half time came with the game still 1.0. The resignation and acceptance of another defensive howler by the Leeds fans spoke volumes.  Even the urinal philosophers couldn't get worked up about it as silence descended on the usually vociferous bear pit of critical debate.  The away dressing room wasn't all sweetness and light though as Mr Beckford didn't appear for the second half.  Presumably Nigel Pearson wasn't keen on Jeramine's refusal to score or try to score against his ex team mates! 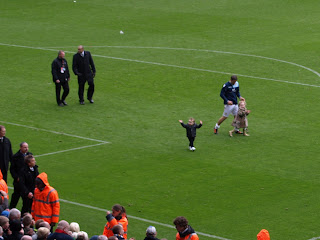 With just 45 minutes of the season now to endure the 2nd half kicked off.  Leeds were now playing towards the kop.  Could they finish with a flourish?  Mmmm maybe not. Leeds huffed and puffed without really having much creative spark with the exception of the hard working Snoddy.  Webber replaced Zac Thompson on the hour and once again showed his aversion to 50/50 tackles. As the half went on the match opened up as if both teams realised they had nothing to play for and might as well attack.  Leeds got a just about deserved equaliser on 81 minutes when Webber bravely slid in from one yard out to convert good work by Snoddy. Inspired by the goal Leeds lifted the crowd by pushing on for the winner.  Unfortunately it was Leicester who took the points after a double deflected shot rolled into Lonergans net on 91 minutes. The 41st time Leeds have conceded & the 11th defeat at home this season.  It doesn't take a genius to identify Leeds' biggest problem does it? 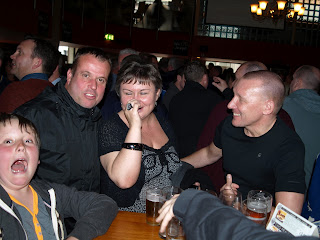 A good number of fans stayed on for the lap of honour.  Michael Brown surprised everyone as the snarling, snapping midfielder paraded two of the cutest daughters on the planet with his youngest endearing herself to the kop by applauding them. Lovely.  Neil Warnock joined the players in giving their shirts and tops to the crowd. His job of harvesting a new crop of Leeds players for next year's vintage is a daunting one.  As is the task of holding onto Snoddy.  Good luck Neil.

We enjoyed the last of this seasons matchdays in Wetherspoons and then Akbars for a "celebratory" curry. With the help of good company and copious amounts of alcohol the trials and tribulations of this seasons campaign were soon forgotten and we were already looking forward to the exciting signings over the summer. Amazing what a couple of pints of John Smiths can do to logical reasoning? Pre season tour anyone?
Can't wait.
MOT


Posted by Andrew Butterwick at 10:55