Leeds County court was the place to be this week. Kenneth William Bates was defending a charge of harassment from former Leeds United director Melvyn Levi.  The gist of the case is that Mr Bates had used his programme notes and his very own personal radio station to wage a vendetta against Mr Levi and his wife. This is the second time these two old timers had gone head to head in court. Kenneth left the court £50,000 lighter in 2009 after calling Mr Levi a shyster and accusing him of blackmailing the club.  Seconds out round two. 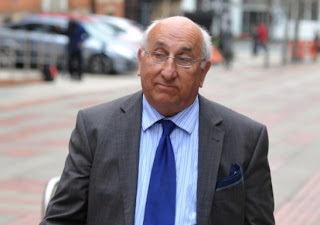 Levy came out of his corner fighting claiming Bates had waged a personal vendetta against him and his wife. Levy jabbed accusing the Monaco Mauler of publishing libellous remarks about him.  The white haired 80 year old responded with shouts branding the accusations as  "rubbish" "pathetic" and "a disgrace"  this was clearly going to be a dirty fight.  The judge stepped in and warned Bates for use of inflammatory language.  In Bates corner his Yes man, Shaun Harvey, was bemoaning the fact that the club was spending a fortune on legal fees.  As the case progressed the Warnock Transfer fund was taking a severe battering. 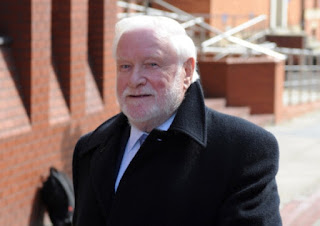 The bell sounded for round three. Levy once again was on the attack comparing Bates approach to free speech identical to that of Joseph Stalin with regards of what he writes in the club programme following up with some good body blows that had the Monaco Mouth on the ropes............."he ruined our lives by the disparaging comments in the programme"................"we had to use personal alarms and bolster security at home after Bates published my home address and encouraged supporters to get in touch"...........Once again Bates used his favourite defence of "rubbish" but Bates was soon on the canvas as Levi's solicitor hit him with a thunderous right hook...." if they were boys in the playground Bates would be dishing out Chinese burns behind the bike sheds"  The crowd in the public gallery roared with delight. The Monaco Mauler dragged himself to his feet as the bell for the end of the round saved his skin. He was certainly losing on points as the first week of the case closed.  Watch this space for next week's conclusion.  Surely he will get off though? I mean most decent Leeds morons know his programme notes are even handed, succinct and non confrontational providing a wide range of information that he gladly shares with his captive audience offering an open and continuing dialogue with his valuable customers..............as long as they agree with him! 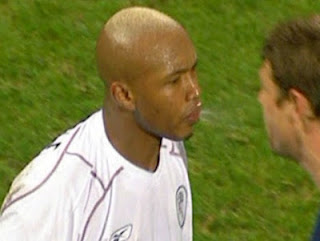 The game with Leicester brings to an end an extremely disappointing season.  The Theatre of Hope changed to the Theatre of Despair to the Theatre of No Ambition and briefly to the Theatre of Renewed Hope when Neil Warnock took over but finished the campaign as the Theatre of Frustration. If Warnock gets his way this will the last time we see the majority of the starting line up in a Leeds shirt as he looks to strengthen his squad over the summer.  All good stuff but rumours of El Hadj Diouf on his way to Leeds have not been received well by the Leeds faithful.  I mean there's Dirty Leeds but we don't want to turn that into Spitting Leeds do we?

The Leicester game will complete another full season of attendance for yours truly.  Probably the most frustrating and disappointing for a long while though.  I wonder if we can sign off with a flourish? I do hope so.
Can't wait.
MOT
Posted by Andrew Butterwick at 20:06