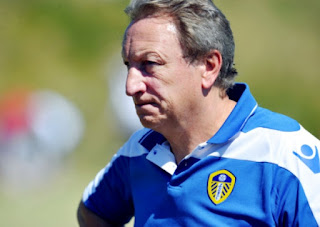 Just two games into the season and already there is a familiar feel to proceedings on Planet Leeds.  Something akin to finding a lost pair of your favourite comfy slippers.  They might give you a nice warm feeling but you are acutely aware they have gaping holes in them and you could really do with investing in a nice new pair...........................which you've been going to do all summer but somehow it's never happened! So if the Wolves game gave us a much needed warm glow after the summer break the Blackpool game exposed the gaping holes in quality that we really need to fill if we are to compete for a top two spot. As for the investment then the takeover saga continues to rumble along without any clear conclusion much to the frustration of everybody connected to the club.

NW has run out of transfer funds and is now shipping players out on loan, Robbie Rogers to Stevenage today, despite having one of the smallest squads in the division.  Given there is only a week left of the transfer window I think we must resign ourselves to the fact that we will be once again scratting around in the bargain bucket of the Emergengy loan system to try and find a gem that everybody else has missed.  The only difference will be NW's take on the situation.  Whereas Larry always towed the diplomatic party line................."You can get some good players through the loan system etc"................NW will be a bit more forthright in expressing his disappointment that he's having to shop at Aldi's instead of the hoped for Harrods. It was telling that in the post match press conference on Tuesday he referred  enviously to the strength of the Tangerine bench and the fact that they had gamechangers sat waiting to pounce.  And pounce they did as both Dicko and Phillips came off the bench and scored.  In contrast we had the the skills of Diouf supplemented by Danny Pugh a player who has been on the "not wanted" list since the end of last season and he still hasn't been able to find a club. I don't think it was a coincidence that Mr Pugh had been on the pitch for less than 90 seconds before Blackpool got their winner.  In those 90 seconds he started on the left midfield before swapping to the middle and then shuffling to the right.  Did he know where he was supposed to be playing?

The reality is that we are still only two games into a long season and as the old saying goes the season is a "marathon not a sprint" so there is still a long, long way to go.  My expectations will not be rising much above flirting with the play off positions unless we get another couple of quality players on board though and in the current climate that seems extremely unlikely until January at the earliest.  So the order of the day will be more attritional football rather than pretty football as NW sets his team up to play to the few strengths we have. 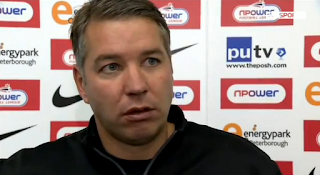 Saturday's trip to London Road to play Darren Fergie's son's Posh offers an opportunity to add to the three points gained against Wolves.  Last year the Son of Satan won a BAFTA award for the most emotional post match interview of the season after Darren O'Dea's 96th minute winner snatched all three points from under the alleged wife-beater's nose.  The delirium it generated in the away end will be remembered for a long time by those Leeds fans lucky enough to be there.  Any repeat of that this year would be most welcome.  Posh have had a sticky start losing both of their games so far.  Couple that with the fact that they are one of the favourites for relegation and Leeds will travel expectantly to the gateway to the Fens.  News that we have so far failed to sell all our allocation of 5,000 tickets is a worry.  We pride ourselves in the fantastic support we manage to take where ever and when ever we are playing but despite the Rhinos playing at Wembley and Yorkshire cricket playing in the twenty 20 finals at Cardiff I would have thought the Posh tickets would have been snapped up quickly.  The disappointing opening crowd against Wolves may be a sign that a significant minority of mighty whites fans are beginning to drift away from the Theatre of Hope?

One thing for sure and that is this fan isn't doing any drifting and will be at Peterborough on Saturday with Justin, the Happy Chocker and the Quiet One.  Will George Boyd show us just why he has been linked with Leeds?  Will Diouf get his first goal for Leeds?  Will there be tears before bedtime again for the Son of Satan?  Will Justin break his away record for most cans drunk on a train?  All will be revealed on Saturday.
Can't wait.
MOT
Posted by Andrew Butterwick at 21:09