If any readers of this post have never been to a Leeds away day then I insist you put it on your bucket list immediately.  Peterborough away is not the most attractive fixture in Leeds United's calendar by a long chalk but it does tick all the boxes for the ideal away day, a large allocation of away tickets, a tight knit ground within walking distance of the train station and a game that is definitely winnable for the mighty whites.  So it was with a large dose of optimism that we set off from Selby station on the short  leg to York and then onto Peterborough for Leeds' third game of this year's campaign.  The train to York was rammed with race goers en route to the Ebor meeting all decked out in posh frocks, tottering high heels and ill fitting suits. Something told me that York was going to get very messy over the next eight hours! 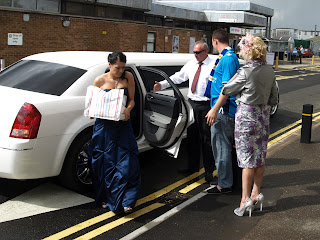 The Happy Chocker, Quiet One, Justin the Beermonster and myself left the revellers behind and caught the Peterborough bound train. The one hour & twenty minutes flew by helped by a plentiful supply of cans and the inevitable quiz.  The Beermonster struggled with the question "which football league team's first 5 letters are all consonants" (answer Crystal Palace) "How can a football team be called after Australasia, Europe, America, Africa and Asia? It doesn't make sense" Justin exclaimed.  I wasn't the only person in the carriage crying with laughter!  The train reached Peterborough with us in good spirits which were further enhanced by a stop off at the Great Northern Hotel opposite the station where Justin endeared himself to the locals by helping the bridesmaids out of the their Limousines and into their hotel for a local wedding reception.  I bet the wedding party were really pleased that a good number of mighty whites fans had chosen the same hotel as their reception for their pre match drinks?

NW's team news showed two significant changes with Diouf replacing White on the right of midfield and Drury making his first start at left back at the expense of Sam Byram.  The 4,000 plus away contingent were in good voice as the match got under way with the novelty of proper terracing adding to the atmosphere.  Peterborough's manager was reminded early on of his rather unfortunate parental connection and his alleged tendency to use his wife as a punch bag.  Everything was set for a rip roaring match. 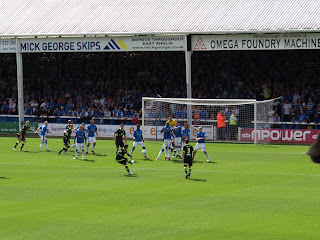 Leeds were on the front foot straight away as once again they tore into the opposition from the off.  Peterborough, who had lost their two previous games, looked hesitant as Warnock's warriors pushed forward looking for the opening goal.  Becchio was felled on the edge of the box in a tantalising position.  Both Drury and Ross Mac lined up to take it but it was the Scotsman who struck it bringing a comfortable save from the home keeper. Leeds kept up the pressure with a corner but nothing came of it.  Still a good start by Leeds and with the away fans regaling Paddy Kenny with "He tweets when he wants" all was well with the world. 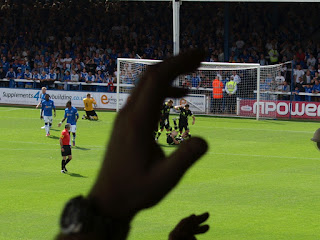 In the 7th minute London Road exploded with joyous celebrations from Warnock's travelling army.  Ross Mac eagerly snaffled up the ball on the left before releasing Varney inside the box who pulled it back to Becchio who coolly converted the chance as if he was shelling peas.  1.0 Leeds and a lusty chorus of "Lucciano, Lucciano" wafted into the Cambridgeshire sky. Buoyed by the opening goal Leeds looked confident and had the better of the first half hour as their hard working robust style upset the Posh.  Ross Mac had another free kick on the edge of the box but failed to add to Becchio's opener.  The weather was playing a part in the game as first bright sunshine then monsoon proportion rains descended on the ground.

The game limped to half time with Leeds enjoying the better of the half.  George Boyd, a summer target of Neil Warnock, showed just why some Posh fans are not over enamoured with his performances as he drifted in and out of the game mostly on the periphery of the action.  Half time 1.0 to Leeds.  After Tuesday's master class at Blackpool this was very much back to basics for Leeds who were not exposed to anything like the skill the Tangerines had against a rather poor Peterborough side. 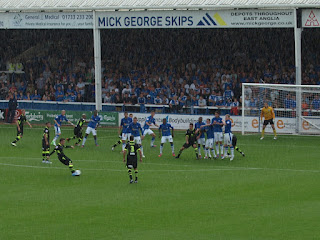 Leeds started the 2nd half on the offensive.  Diouf glided past the full back and won a corner on the right.  Leeds kept up the pressure and just five minutes into the half Becchio helped himself to a second goal after good work down the right by Diouf and Ross Mac. 2.0 Leeds and we were cruising. The Leeds fans taunted  Mr Ferguson with  "You're getting sacked in the morning" as his team looked beaten and dejected with less than an hour gone.  Tomlin had tested our favourite tweeter, Paddy Kenny, with a swerving shot but other than that all was quiet on the defensive front.  On the hour the Son of Satan shuffled his pack in an attempt to rescue the game by bringing on Little and Swanson closely followed by Paul Taylor.  This sparked Posh into life and they enjoyed their best period of the game as Leeds were content to try and hold what they had. 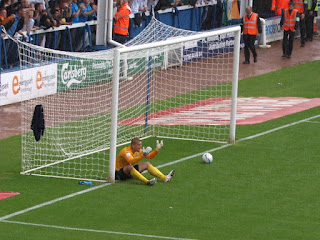 On 72 minutes Leeds' serene march to all three points was rudely interrupted as the home side pulled a goal back out of the blue.  A corner ball into the Leeds box was headed clear in the direction of Norris who miscued his clearance and when the ball looped back out to the edge of the box Bostwick struck a sweet volley beyond Kenny into the net. 2.1 Leeds.  Mmmmm this could be interesting with just over 15 minutes to go?

Poleon and Byram replaced Diouf and the unhappy Ross Mac as NW tried to shore up the shakey Leeds team.  Young Byram was soon testing the Posh defence with a surging run and shot and shortly after Becchio broke free from the half way before releasing Byram in the penalty box but again the effort went wide.  At the other end Posh were beginning to sense they could snatch an unlikely equaliser as they pushed forward to test Paddy Kenny's goal.  Nails were now been bitten in the away end.  Well at least mine were!  Andy Gray replaced Becchio with 5 minutes to go.  Possession was now key as Leeds tried to close the game out which they did despite conceding a couple of free kicks on the edge of their own box.  The final whistle went to the relief of the travelling fans.  Cue a standing ovation for the men that glow in the dark. 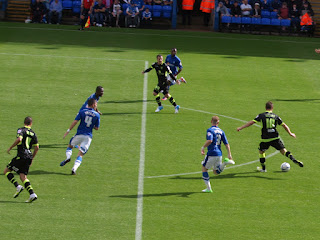 Becchio was my man of the match today.  Good performances from Pearce and Lees at the back with solid support from Pelts and Drury.  Diouf looked laboured at times and failed to create any spark.  Norris had another good game whilst Byram and Poleon looked very lively when they came on.  Varney worked hard and I can see him becoming a bit of a Marmite player with the Leeds faithful.  Either you love his work rate or you are frustrated by his poor third touch.  Warnock was delighted with the three points as he punched the air towards the Leeds fans.  A good win against a poor team is my assessment.  Just the sort of win we need if we are going to utilise the words play offs in May next year but not a performance that will frighten some of the contenders for automatic promotion? 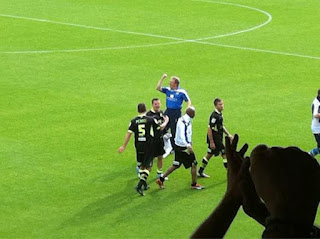 The journey home was helped by the knowledge the fledgling League table showed us in 6th spot although I'm a bit old school in saying the league means nothing until 10 games have gone. So all's well that ends well. Another good away day with the added bonus of three points to the mighty whites.............slightly marred by Justin catching the wrong connection from Donny to Leeds and last we heard he was heading for the wilds of Scunthorpe!

Oxford in the League Cup up next on Tuesday. Hopefully another step on the cup trail that could end up in Europe!  I do like to dream!
Can't wait.
MOT

Posted by Andrew Butterwick at 21:57

Great blog. Living in Oz, its great to be able to feel in touch with the Leeds ground swell. More power to yer elbow son love your work! Cheers, Frank

Frank,
thanks for the kind comments. Spread the word.
MOT