Selby station was alive with anticipation and excitement.  It was the first day of the football league season and the platform was packed with fans en route to the Theatre of Hope for the opening clash with Wolves.  As ever I was accompanied by the Happy Chocker and the Quiet One as we once again looked forward to the ups and downs of another league campaign.  The train was full of familiar faces swapping stories of the summer break and all things Leeds United generating an atmosphere akin to the first day of term back at school after the long holidays as the carriage hummed with laughter and smiles.  Don't you just love football?  On the first day of a season anything and everything is possible. 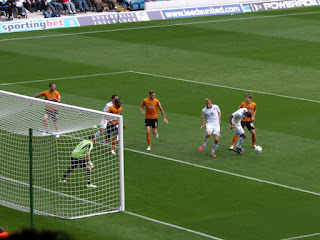 The early kick off and the Sky cameras appeared to have reduced the crowd to a disappointing 23,000 but the die hard fans who had made the trip were in a noisy and boisterous mood.  Takeover talk was all around.  Is the deal still on or is it off?  Wasn't today going to be the day it was "definitely" going to be announced..............again!  Fans seem to fall into two camps.  Either you're in the "I'm not listening to anything until it's announced on the LUFC website" camp or you've heard from a mate of a mate some detail that convinces you that the deal is still going through today, tomorrow, tonight or yesterday.  For me Kenneth William Bate's lack of vitriol towards the potential investors in his programme notes suggest a deal could still happen but as I suggested to my fellow fans I'm here to watch a match not debate when or if some middle eastern chap prises the ownership of the club from Capt Birdseye's clammy paws.  In fact I nearly issued a statement  to confirm that fact.................................. err no.

News that NW had named Peltier as his captain came as a bit of a shock despite Paddy Kenny indicating as such in a tweet.  The new captain led an unchanged team from last week with young Sam Byram keeping his place at right back and Spit the Dog remaining on the bench.  The Happy Chocker was cautiously predicting a 1.1 draw whilst I punted for a 3.1 win.  Clearly the excitement of the new term and the adrenaline rush of being back at the Theatre of Hope had made me a tad optimistic! 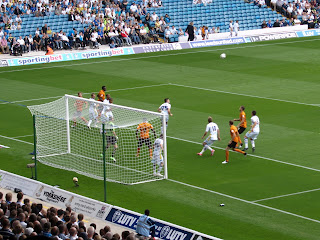 Ross Mac, Becchio and White were the only surviving first teamers from last term to start the game which just shows how much NW has changed the team over the summer. The game kicked off in sultry conditions and Leeds were out of the traps like Whippets chasing a rat.  Wolves were rattled as waves of direct attacks rained in on the Wolves goal.  Varney tried his luck with a shot, Austin rose like a Cobra to head goalwards the keeper scrambled a save and the ball pinged about in the box before Wolves cleared.  This was just the start we needed.  Leeds were playing at a high tempo with the midfield snapping at any half loose ball like hungry crocodiles devouring Wildebeast trying to cross the Serengeti river.  And king of the Crocodiles was the imperious Ruddy Austin.  It was such a change from last year's rather anaemic style.

Wolves were clearly stunned by their rude introduction to Championship football but cleared their heads enough to put pressure on the Leeds goal with the talented Jarvis causing concern for the Leeds defence on the flanks but the new resolve in the home defence held firm with Pearce leading by example.  Just after the quarter hour Leeds got their reward for an enterprising start. Paddy Kenny started the move with a 45 yard pass that found Ross Mac that Glenn Hoddle would have been proud of in his prime.  The Scot took the ball around the flailing full back and delivered a pin point cross around the back of the defence right into the path of Mr Becchio, who cost less than Van Persie, who buried the ball in the Wolves net. Get innnnnnnnnnnn! 1.0 Leeds and the stadium erupted in a cacophony of noise.  A lead Leeds fully deserved. 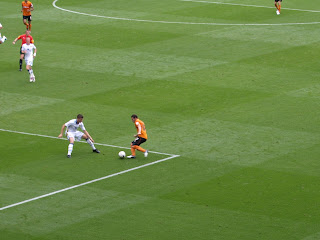 Paul Green was showing signs of improvement from last week's showing but he unfortunately picked up an injury that he just couldn't run off and gave way to Mr Diouf with five minutes of the half left.  This week "Spit the Dog" got a much more welcoming reception as he entered the fray. Ross Mac nearly doubled the advantage just before HT as he tried to convert a header from Becchio from close range.  Leeds finished the half on top and left the field to a standing ovation.  Their new approach based on a high tempo pressing game had been very well received by the Leeds faithful who do like their teams to work their socks off and show some passion in their play.  They had certainly done that in the first 45 minutes with Pearce, Austin and Pelts outstanding.  The half time debate with the urinal philosophers was a joy.  No negativity just grudging appreciation which as we all know is Yorkshire for high praise. "At least we're putting some real tackles in"  one happy fan suggested. "I'm not sure I'm used to seeing our midfielders tackle.....is this really Leeds?" one wag said.  There was no getting away from the fact that the Leeds fans were by far the happier of the two sets of supporters as the players had their break. NW's no nonsense tactics in defence and midfield had worked well with Leeds breaking quickly and swiftly when they had the ball.  Could they keep it up in the muggy heat though?

Leeds were now playing towards the baying kop. Diouf had slotted in at right wing in front of young Byram.  His languid style is deceiving though as he showed on more than one occasion when gliding past opponents. Although Leeds started the half well and forced some early corners it was Wolves who were gradually getting back into the game. Austin did test Ikeme in the Wolves goal with another fine header from a corner and Varney fluffed his lines when through on goal but most of the play was now focussed on Paddy's goal.  The defence was rock solid with Pearce immense in the heart of the home side's resistance.  For all their possession and pressure Wolves were struggling to test Leeds' top tweeter, Paddy Kenny, in the home goal. In fact throughout the whole game they only managed one shot on target an indication that they are still suffering from the same problems that got them relegated last year. 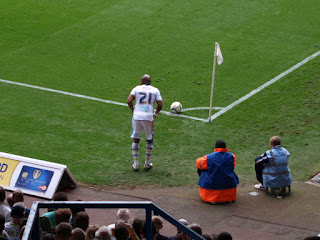 As the game entered the last twenty minutes nerves began to fray slightly amongst the home fans.  Leeds were hanging onto what they had but seemed to be tiring.  Mr Warnock replaced Ross Mac with Tom Lees who went to centre back pushing Pelts out to right back and allowing Byram to fill the right wing spot.  Spit the Dog went up front to partner Becchio.  Wolves were now pushing hard for an equaliser but Warnock's dogs of war weren't about to give up their one goal advantage easily as bodies were flung at potential shots and heads at any ball that dared to enter the Leeds box.  This was stirring stuff from the men in white.  Diouf showed his experience and class up front as he took the sting out of the game whenever he got the ball.  He could be the best value signing of the season?

The clocked ticked past 90 minutes and into 5 minutes of added time.  Wolves had more corners but Leeds held firm.  The ref's final whistle was greeted with a mighty roar and another standing ovation. Diouf threw his shirt to his now adoring fans and everyone was happy.  Leeds had just sent a message to the rest of the championship. Neil Warnock has hewn a team of granite characteristics with a penchant for the counter attack.  He is rebuilding Fortress Elland Road.  Bring it on!

Jason Pearce was outstanding at the back with Austin just shading MOM in my opinion.  Up front Ross Mac and Becchio worked well in tandem with the slimmer version of Becchio playing as well as I've seen him in two years.  His goal was exquisite. Young Byram looks a real gold nugget and mature beyond his years and he nearly crashed in a volley that would have sealed the game late on.  Pelts showed why he's been given the captains armband.  Leicester City must have some top defenders if they can allow him to leave for such a small transfer fee?

Smiles and excited chatter was the order of the day as the fans streamed away from Elland Road.  Takeover or no takeover just maybe NW is getting the right blend of players to put in a strong challenge for promotion.    One thing for sure for 90 minutes the only thing mattered to the Leeds faithful was what was happening on the pitch............no Bates out chants or negativity.  NW is doing a superb job.

Blackpool on Tuesday night.  Will Austin power Leeds to a victory that will make Blackpool rock?  I do hope so.


Posted by Andrew Butterwick at 22:50

This was very good to read! Great detail of the match! Come on Leeds! :) MOT

Always a pleasure reading your blog. Looking forward for this new exciting season!

Thanks for the comments guys
MOT

Taking it all in from Oz. One game doesn't tell us much but sounds like there is a figthing spirit that has been lacking in the past. Away at Blackpool will be a reasonable indicator of where we may be headed. I noticed under Grayson that Leeds tended to fade late season. Hopefully Warnock can keep us ticking for the duration. Good article as usual.

Matt,
Agree with your point on fading at the end of the season. I'm hoping NW has already partly solved this with a good pre season training regime. Fighting spirit is there in spades!
Regards
Andrew

What was a wag doing with you in the urinals?

A wag as in an old sage not a female WAG...lol
MOT