Selby station was glowing in autumn sunshine as the Happy Chocker, Quiet One and Joel (a sneaky Forest fan) gathered for the trip to the Theatre of Hope.  News that Chairman Bates was addressing the masses on State Radio regarding the latest news on the takeover had sparked feverish speculation in cyberspace.  Was the deal done? Was this going to be Cuddly Ken's goodbye speech or was it just another false dawn?  In the end it was none of those. "We're well advanced with discussions" blah, blah, blah...... "working towards concluding the deal" blah, blah, blah "four of the investors were over for a big meeting on Friday" "planning for the January transfer window"  Mmmmm I must admit that all sounds positive to me.  But Ken couldn't resist slagging off LUST and even the esteemed Phil Hay from the YEP for their "inaccurate and unhelpful"  input. He never knows when to shut up does he?

The flurry of excitement regarding Ken's address took the spotlight away from what was a very difficult game against an unbeaten Forest side brimming with confidence.  NW's team selection was always going to be interesting after Tuesday's capitulation to Hull.  In the end he made the best of a bad job and moved Pelts to centre half in a swap with Tom Lees who went to full back.  Drury came back into the left back spot whilst White dropped to the bench.  Poleon got a deserved start on the left with Becchio shaking off his injury to partner Diouf up front.  If Leeds were to get anything out of the game they needed a good start and that's exactly what they got.

Leeds as usual opened with a high tempo and took the game straight to Forest.  Austin fired in a shot that Camp saved as Leeds looked to avenge last year's 7-3 mauling at the hands of the East Midlanders.  Early pressure won a corner for Leeds.  Diouf swung in the perfect corner only for Lees to head over.  This was looking good for the mighty whites.  The large away following did have something to cheer about though as Cox tested Kenny in the Leeds goal but the early momentum was definitely with Leeds.  Drury added solidity to the vulnerable left back spot and Pelts looked much more comfortable at centre half as Leeds dominated the opening 15 minutes. Austin tried his luck with a free kick from 30 yards but it thundered back from the wall. Diouf was gliding effortlessly across the turf and giving the Forest left back nightmares and it was another bit of Diouf magic that set up the first goal.  He found space on the right before swinging in a teasing cross to the back post where Byram shinned it back across the goal for Becchio to smash home the opener.  1.0 Leeds and the home fans celebrated in style.

Forest were struggling to gain a foothold in the game as Austin and Tonge mopped up everything in midfield and Diouf was enjoying his best game yet for the whites.  Forest are not unbeaten for nothing though and when they did attack they looked threatening.  Cox headed over a chance just to remind the Leeds fans that at one nil it was still anybodies game.  On 23 minutes the game swung very much in Leeds' direction.  Another Diouf induced attack saw the ball fall to Becchio on the edge of the box.......he wriggled free of his marker and cocked his famous left foot ready to strike only to be denied by an outstretched Forest boot but the ball rolled to the edge of the box where young Poleon swooped like a Panther to rifle the ball home.  2.0 Leeds and Elland Road was rocking.  The potential owners sat in the stand must be liking this? 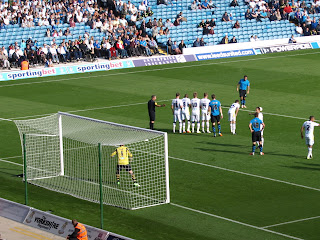 The 2nd goal stung Forest into action.  The dangerous Cox surged past Pearce and went down at the slightest touch from Pearce which earned him a yellow card.  More to the point the free kick was just on the edge of the box and well within the portly Mr Reid's range.  I held my breath as he stepped up and put the kick just wide of Kenny's left hand post.  Phew!  As the game progressed to half time Leeds increased the pressure on the Forest goal.  Byram sent a header high and wide after good work from Diouf and then just before the break Becchio should have buried a cross from Byram from no more than 8 yards out.  Leeds went to the tunnel with a well deserved ovation from the home crowd.  Diouf went to the Kop and gave his shirt to the young disabled lad in the tripod wheeled support.  Top man although he might complain when he sees a £40 deduction off his next wage packet?

The urinal philosophers were more than happy with what they had seen.  "Lots better that was" one pundit voiced, "Should have been three up though" countered another.  "We can still fuck it up from here" warned a rather grumpy cynic.  Mmmmm he had a point?  Forest were out for the 2nd half first with McGugan and Lansbury replacing Reid and Moussa highlighting the strength of their bench.  We were about to witness the classic game of two halves as Forest reversed the first half superiority of the home side and began to take control of the game as Leeds sank deeper and deeper.  Forest were looking for a chink in the Leeds armour but the Leeds defence was battling well and repelling the merry men of Nottingham.  That is until the impressive Greg Halford found that chink courtesy of a long throw straight from page one of Stoke City's play book.  He hurled the ball deep into the Leeds box.......Kenny came for the ball but Blackstock easily beat him to it and glanced the ball into the empty net.  2.1 and I suspect Mr Warnock's blood pressure was off the scale?

Forest smelt blood and went in search of an equaliser.  The Leeds injury jinx struck again though as Peltier went off with an ankle injury.  Warnock took off the disbelieving Poleon and sent on Varney and White.  Byram went to full back, Lees to centre half and Varney out wide.  Leeds prepared to man the ramparts for the Forest assault.  Another Halford dive bomb flew into the Leeds box........the ball was half cleared and Cox curled a shot goalwards that Kenny only just parried away.  I exchanged worried glances with HC.  There was still 25 nerve jangling minutes to go! 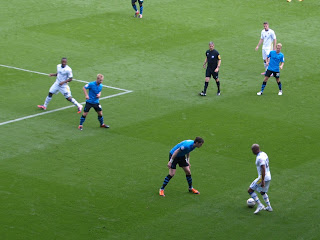 Forest were now dominating possession as Leeds struggled to keep the ball.  A combination of free kicks and Halford's throw ins peppered the Leeds box as Leeds hung onto their precious one goal lead.  Lees was booked for a foul on Blackstock.  McGugan line up what seemed to be the 97th free kick from the edge of the box.  "We can't keep all of them out" HC observed but McGugan's shot was a good 3 inch wide of the post as Leeds survived again.  Billy Sharp came off Forest's bench to try and breach the home defence as the clock ticked slowly down to 90 minutes.

Forest became more and more frustrated by Leeds as both Austin and Diouf took the sting out of the game by heading for the sanctuary of the corner flags to run down the clock.  The clock struck 90 minutes.  Nearly there now......but what was that number shining from the 4th officials board 6 f****** minutes? Where did they come from? So another 6 excruciating minutes were endured before the ref finally blew for time.  Get in you beauties!  Leeds 2.1 Forest.  A victory all the sweeter as I hadn't hoped for anything more than a point. 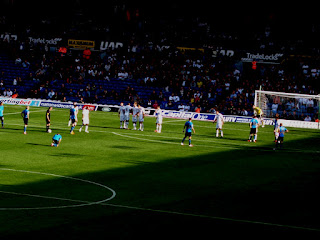 Diouf was supreme today whilst Austin purred like a Rolls Royce in midfield.  Pearce fought like a warrior at the back well supported by Drury. There were lots of happy faces as we streamed away from Elland Road with even optimistic talk of a win against Everton.  Football is a drug that can play some weird tricks on your brain.  This was an encouraging performance from Leeds given the woeful resources we have currently available.  Hopefully the four potential investors saw enough today to persuade them to buy into the mighty whites ready for the January window?  As for Forest their fans seemed a tad upset that they hadn't got anything out of the game and accused Leeds of time wasting at the end! Like they wouldn't do the same?

Everton in the cup on Tuesday.  On paper we haven't a prayer but the cup does funny things to teams.  Remember Jan 3rd? With a bit of Warnock's fighting spirit and a touch of luck....oh and a few Everton reserves you never know.  Bring it on!